‘Harmony is the true soother of the soul and the pure consistent of the meek,’ so wrote WH Auden in his 1955 epic ‘Shield for Achilles’ collection. Well if that be the case then let poetry be in motion for Thiriet by TDS this weekend!

To call their driving trio of Tristan Gommendy, Ludovic Badey and Pierre Thiriet ‘dark horses’ would be a little patronising, but the 2012 champion team is secretly much feared by most in the LMP2 field, especially for their relentless and consistent pace. ‘Ludo’ Badey is much better than he has ever been credited for, and with Gommendy reminding everyone of his latent talent, and Thiriet rarely making a mistake, the tidy French team are very much ‘under the radar’ and ready to stealthily take the spoils come 18.30 tomorrow evening at Silverstone.

Newblood by Morand’s repair mission goes on long into the night!

On the face of it, pole position appears to be a private battle between New Blood by Morand’s Christian Klien and Greaves Motorsport’s Tom Kimber-Smith, with a possible interloper in the form of either Harry Tincknell or Filipe Albuquerque, depending upon whom the Jota Sport thrusts in to the qualifying spotlight.

However, Newblood by Morand had a late night on Friday, effecting repairs to its Morgan-Judd after the Free Practice 2 ‘altercation’ with the #95 AF Corse Ferrari.

The FP2 contact between Gary Hirsch and Cedric Sbirrazzouli appeared to be relatively innocuous but team boss Benoit Morand reported that the left rear wishbone smashed through the gearbox casting and damaged the whole transmission unit, meaning a bellhousing replacement had to be activated by the Swiss team ahead of qualifying.

Kolo ….where art thou?

Kola Aluko remained the ‘enigma’s enigma’ during Friday at Silverstone. The Nigerian, who is registered to drive the #81 Kessel Racing Ferrari 458 Italia, was at the circuit but failed to turn a lap in the car he shares with Matteo Cressoni and Thomas Kementar.

Such was the elusiveness of ‘Kolo’ that his own team were unsure as to whether he would compete in the race itself due to other commitments.

Aluko is the CCO and Executive Director of Atlantic Energy, an indigenous, private upstream oil and gas company, focused on independent exploration and production (‘E&P”) participation in Nigeria. He is currently ranked within the top 40 richest people in his home nation. It is not known whether the recent unrest in the country has anything to do with Kolo’s non-appearance at the track today?

Whatever the case, Kessel Racing was, in the circumstances happy with Cressoni’s pace in the car when the Italian peaked with a 2m01.914s lap despite a cracked manifold on the 458.

Gustavo Yacaman wore shades for most of Friday at Silverstone but it wasn’t the atypical Northamptonshire spring sun that dazzled him, but more the ‘red eye’ flight from the US which landed at just before 11pm on Thursday night, meaning sleep was a precious commodity for the Colombian ace before his Silverstone debut a few hours later. 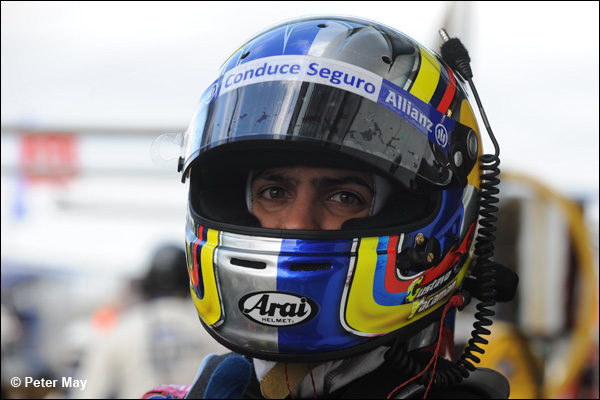 In the second free practice session, on a track he had only seen on TV and on a simulator, ‘Ocelot’ set the 8th fastest lap of the day with an impressive 1m50.952s lap. It was a superb effort by the amiable racer, who finished 4th in both the Daytona 24hrs in January and at Long Beach last weekend.

DSC realises that not everyone is a football fan but there was a remarkable racing/football link on Friday. While the second free practice session came to an end yesterday afternoon, this correspondent became inundated with text messages from Danny Watts, who was spectating at the Oxford Utd v York City division two clash, just 20-miles from the track that he should have been frequenting!

A proverbial ‘six-pointer’, the game went the way of the ‘Minstermen’ much to Wattsy’s’ chagrin (and to SS’ delight!). However, DSC is sure that all fans would much prefer to have witnessed DW in his rightful place, namely on the grid, here at his home track at the wheel of the Strakka Dome.