Most drivers like Long Beach, not just because it’s the only street race we do now but also because it’s such a great atmosphere and location. The Californian sun was out all weekend – unlike in some previous years – and it definitely shone down on Corvette Racing as we celebrated a first win for the C7.R for Jan and Antonio, and a first podium of the year for me and Tommy.

We’d qualified 4th in GTLM, one of just two classes racing here this year, behind a storming pole-claiming lap by Jan and the two BMWs. I took the start and it was reasonably uneventful, as was the whole of the first lap apart from a few locked brakes and the odd person a bit out of shape. 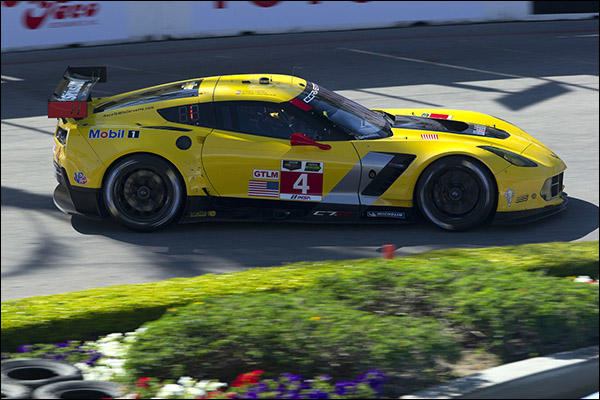 The key thing which shaped our race was that the two BMWs in front of me and I didn’t manage to get past one of the HPD Patron cars at the first corner and Antonio, in the No.3 Corvette, did. That split us and Antonio managed to pull out a big gap, leaving the three of us behind him trying to get past it for quite some time. Eventually we all got past in one go at Turn 6 which caught the HPD’s driver a bit by surprise, but we all had to take the chance while we could.

By this stage we had quite a problem with our No.4 car with extremely high tyre pressures, for whatever reason, and that was leaving me skating and sliding around. I was losing both front and rear ends of the car at different points around the track and the BMWs were just edging away a little bit. By the time I came into the pits for our one and only stop, I was about 4-5 seconds behind the BMWs.

The guys did a fantastic job in the pit stop and got Tommy out to leapfrog one of the BMWs, but unfortunately we were just a bit too far back to the other one. Tommy did a fantastic job to try and catch him but used up everything in the car, including the tyres. We then had to pretty much sit it out as we couldn’t get by the second BMW – it was just too much of a step although Tommy whittled the gap down to just 0.273 seconds shy of the runner-up spot by the chequered flag. He also set the fastest GTLM race lap at 1:18.954 – there was no doubt we proved the car’s got the pace to challenge this year.

It was the first podium for us with the C7.R and ultimately great to have got that after Daytona and Sebring which had both showed a lot of promise but not the results to go with it. While we got a podium, Jan and Antonio got the victory which was fantastic for everyone at Corvette Racing, Chevrolet and all our partners. I think that, in general, when you have just the Prototype and GTLM classes together, which have mostly pro drivers, these drivers are likely to make far less mistakes and cause fewer problems. There are still some drivers in the prototype category who aren’t as experienced or as skilled as those running around at the front, but they still all kept it on the race track so it didn’t cause the yellows expected. I was surprised we didn’t have a competition yellow during the race; they’d even made a reference in the drivers’ briefing to the fact ‘there would be a debris yellow’ at some time in the race. Race control must have been as surprised as we were!

The race ran out as it did, with few changes to position although there was some good racing in our class and some further down the pack, but it’s the cleanest and most straight forward Long Beach I’ve ever done. There were fewer cars on the track and fewer with less experienced guys in to have those ‘moments’ or issues. I think it was challenging for a number of the prototype cars, especially the P2s, trying to get their tyres to work because it’s been cooler here this year, and you could see they were struggling at times.

We didn’t struggle in our Vette, but we didn’t have the same trouble-free run that the No.3 did. Next time it’s our turn…see you at Mazda Raceway Laguna Seca!