A formation-lap coming-together between the front-row qualfiers allowed Max Buhk and Maxi Gotz to score an unexpected win in the #84 HTP Motorsport Mercedes in the second of the weekend’s two Blancpain Sprint Series races at Nogaro. 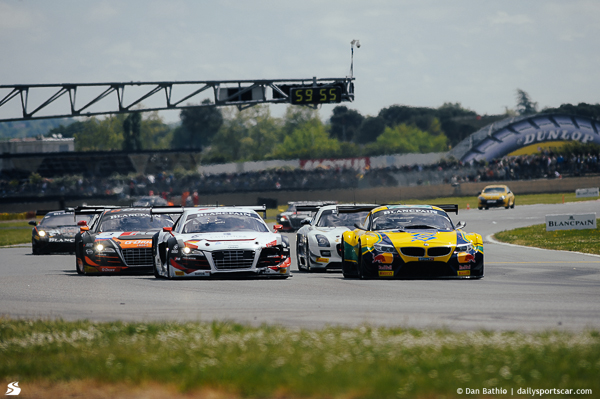 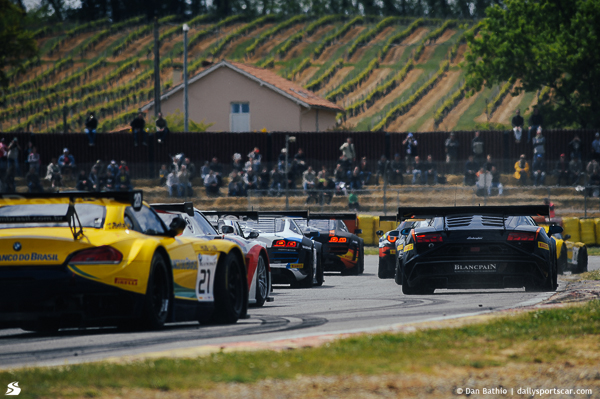 Starting from pole, Saturday’s race-winner Cesar Ramos (#1 WRT Audi) and second-place starter Niki Mayr-Melnhof (#6 Phoenix Audi) hit each other somewhere on the formation lap, resulting in a right rear puncture, suspension damage and instant retirement for Ramos. Melnhof’s car sustained front-left damage, losing a headlight, but mid-way through his stint the R8’s bonnet flew off and the car was disqualified from the race with black-and-orange flag. 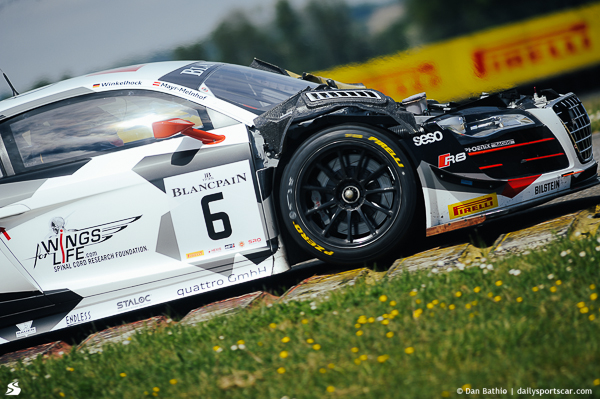 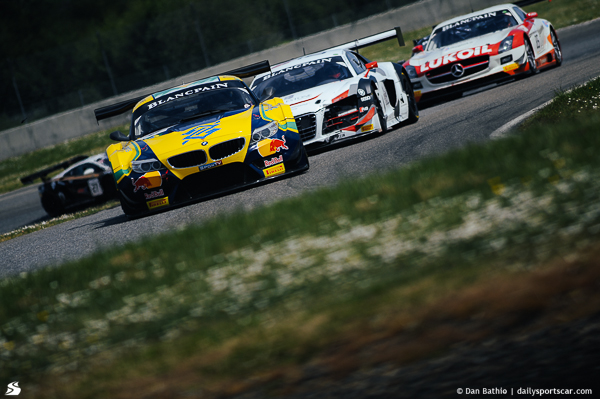 The Audi incident meant it would be Saturday podium finisher Sergio Jimenez in the #0 Team Brazil BMW who led the field at the end of the first lap. Behind him, Max Buhk had made up a place on Gregory Guilvert in the #3 G-Drive Audi, while further down the field, Mark Hayek’s race came to an early end due to a puncture on the #24 Lamborghini.

Buhk was clearly faster than leader Jimenez, and on lap two he slipstreamed the BMW down the back straight, setting up a pass around the outside into the following right-hander. Guilvert soon passed Melnhof’s damaged car for third, and immediately set about pressuring Jimenez for second. 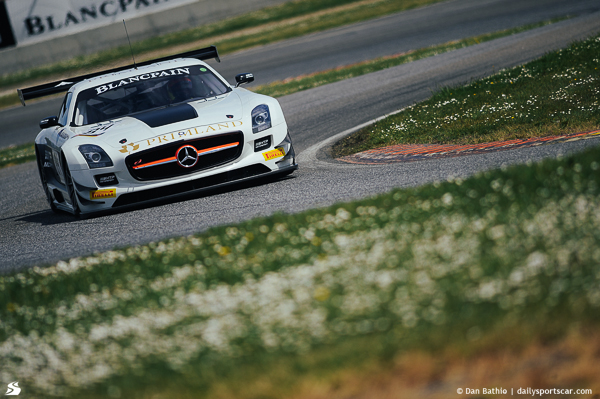 As Buhk streaked away at the front of the field, a train formed from second-place Jimenez down to sixth-place Mateusz Lisowksi in the #4 Audi R8. It took two tries at the end of the back straight for Guilvert to get past Jimenez in a carbon-copy of Buhk’s move, but the French GT regular now faced a seven-second gap to the young German up ahead.

The order stayed like that up to the pit stops: Buhk leading Guilvert, with Jimenez in third, Sergei Afanasiev fourth in the #85 HTP Mercedes, Melnhof fifth but headed for retirment, Lisowski sixth and Filip Salaquarda seventh in the Villorba Corse Ferrari.

Buhk was the very first driver to pit once the window opened, while second-place Guilvert waited until the very last moment. WRT seemed to be that bit quicker with the driver and wheel changes, as Ortelli emerged after the pitstop cycle in the #3 just four seconds behind Buhk’s co-driver Gotz. Caca Bueno was a further 15 seconds down the road, having taken over the #0 BMW from Jimenez, so it would be a fight to the flag between Gotz and Ortelli for the race victory.

The Monegasque pushed hard, but never looked like closing at a fast enough rate to take the win. He eventually crossed the line just 1.7 seconds behind the winning Mercedes. The order changed behind these two however: Vincent Abril had taken over the #4 Audi in fourth place, just three seconds behind Bueno, and their battle for the final podium position would be the highlight of the race’s second half. 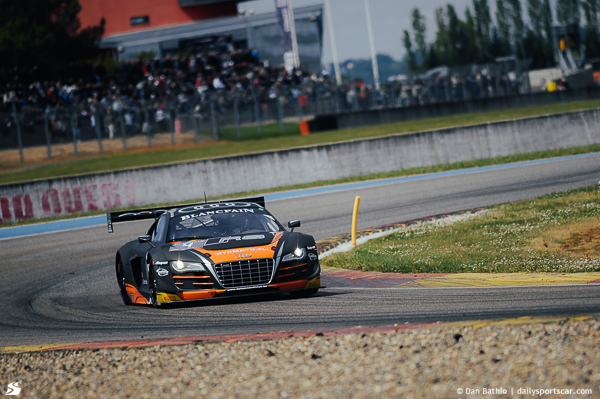 “It was a really tough fight,” a satisfied Abril remarked afterwards. “Bueno was really good on the brakes and really good at positioning the car in the corners to stop me getting through. But I saw he was pumping the brakes on the back straight, so I went for a huge dive, went all the way down to first gear. He tried to cross back on me, but I made it stick.”

The pass came with just a minute and 30 seconds of racing time remaining, giving Abril and Lisowski an overall podium to go with their Silver Cup class win. “Honestly, I hadn’t dreamed of being on the overall podium in my first GT race weekend,” commented an emotional Lisowksi. “I tried not to take too many risks at the start, and I was surprised to be able to fight with some more experienced guys.”

Bueno would lose another place before the flag, to Stef Dusseldorp in the #85 HTP Mercedes, and behind them rapid pro trio Jeroen Bleekemolen (Grasser Lamborghini), Nelson Piquet Jr (Team Brazil BMW) and Rene Rast (WRT Audi) ran nose-to-tail for much of the second stint.

Piquet was forced to pull into the pits suffering from his second puncture of the weekend, promoting the Rast/Ide Audi to seventh at the flag, ahead of Giorgio Pantano’s eighth-place Bhai Tech McLaren and the Basseng/Latif Audi in ninth. Salaquarda and Montermini’s Ferrari rounded out the top 10 finishers.

After the race, winning driver Max Buhk said: “The start was a bit confusing – I thought there was another formation lap when Ramos entered the pits. I got past the Audi and BMW okay and saw the gap start to grow. I made sure to manage my tyres while building the gap for Max [Gotz].” 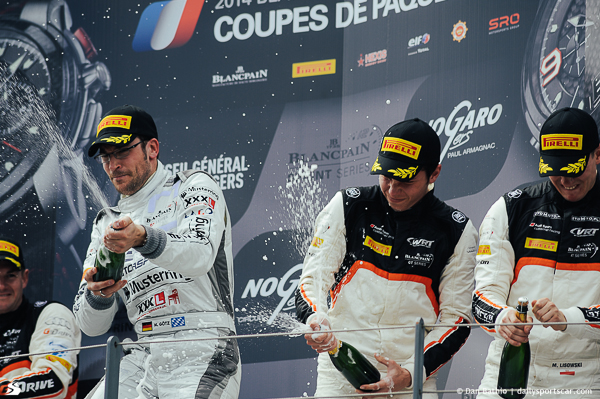 “I knew the Audis would be a little faster in the pits,” added Gotz. “We stopped early as I was putting on a brand-new set of tyres and I pushed very hard on my out lap. My engineer kept me up to date with what Stephane was doing – he was quicker than me in the first sector, so I pushed hard in the second and third.” 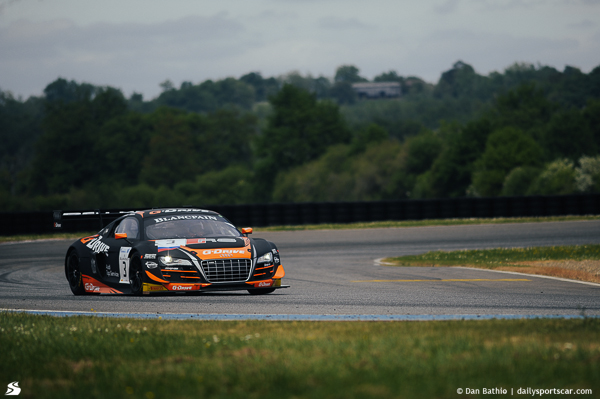 Second-place Ortelli didn’t seem too disappointed to miss out on the win. “First of all, I’m frustrated for Laurens and Cesar – they were really a class apart this weekend,” he conceded. “But this is the third year in a row I’ve been on the podium at this race, so I’m pretty satisfied with that. We had the best pit stop, but were maybe not the very quickest on track. My tyres stayed consistent but I just didn’t have the pace of the Mercedes – I couldn’t have used the tyres any better than I did.”