The Italian GT Championship, 2014 version, kicked off on a Saturday night race at the Misano racetrack a bunch of metres from the Adriatic sea; a perfect place to relax and enjoy…but the field of 25 cars and their 48 drivers (two cars had solo drivers) had some other plans. 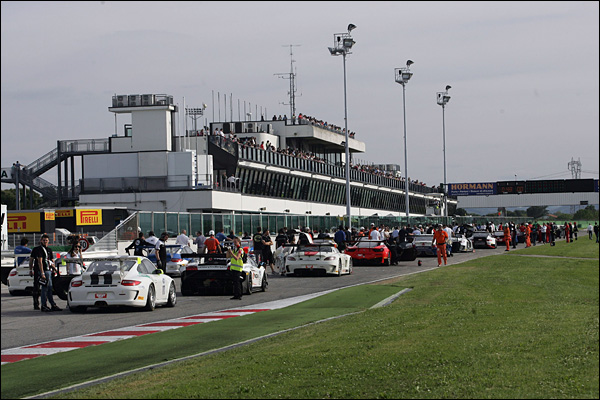 After the qualifying, and since most of the pro driver starting first we can have a two-way race in a mixed conditions that can only provide us fireworks. No time penalty this time so 100% pedal to the metal for everyone.

The start was a clean one, with the poleman Marco Mapelli able to get the best out of his P1 spot and keeping the lead into the first turns. Alessandro Balzan was second and Andrea Amici third, while Fabio Babini, Raffaele Giammaria and Alvaro Barba rounded out the top six. No major contact and no safety cars…that was good. 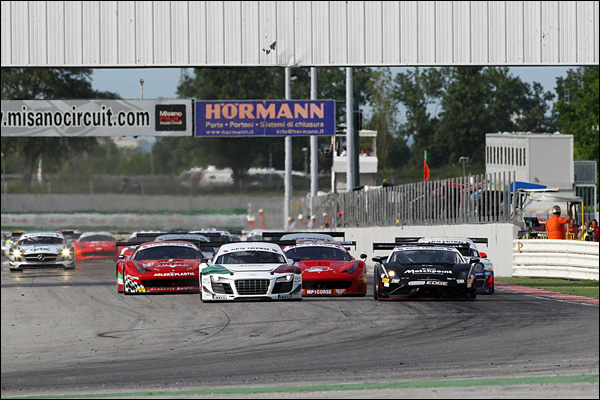 The first laps saw Mapelli gradually but constantly increasing his lead, inch by inch and tenth by tenth, while Balzan had his hands full keeping a renewed Lamborghini Gallardo with Amici at the wheel behind him. The first retirement of the season was Barba, who had to park his Ferrari 458 Italia due to a mechanical failure.

In the Cup class [sorry guys, this time you’re overshadowed by the monster GT3 field], Christian Passuti grabbed the lead from Fabrizio Bignotti and the “Hispanic Lambo” of “El Pato”. 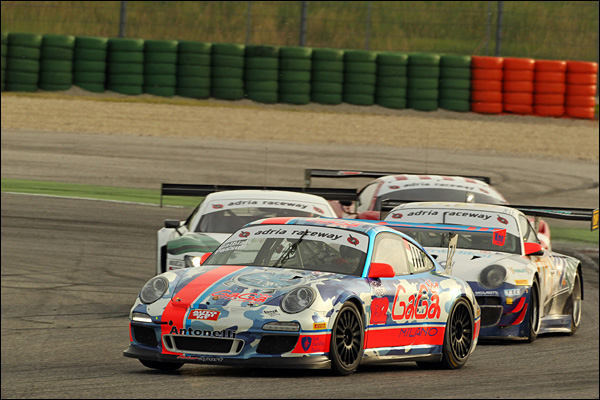 Upfront, the situation changed in a bunch of laps, with Balzan able to build a cushion from Amici and -with his usual monster job – close the gap to Mapelli very quickly; but overtaking the R8 was clearly a hard job this time. Amici, meanwhile, was now followed very closely by a “dirty-half dozen” of angry men, composed of the Autorlando Porsche of Babini, the Ferrari of Giammaria, the second Audi of Dindo Capello, the other Porsche of the solo-driving Stefano Pezzucchi and Vincenzo Donativi in the 2013 Champion EbiMotors 997. The young gun Francisco Mora followed in the leading Mercedes, then came Gianluca Carboni, Luigi Lucchini and Marco Magli.

The pressure behind Amici became too much and the Lambo had a spin, losing lots of places. Babini said “thank you very much” and grabbed the third place…but not for long, as Giammaria used his top speed to overtake the ex-FIA GT driver to lie third overall.

In the Cup class, Passuti easily held the lead from Bignotti and “El Pato”. 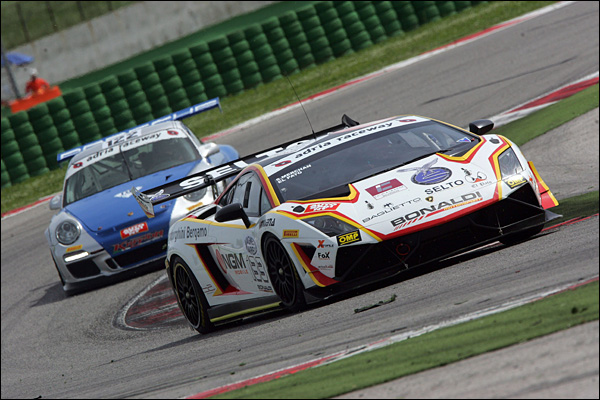 The race then calmed down and the pit stop window opened. As always, the Pro drivers stayed out as long as possible, while the starting slower ones soon handed over their duties to the faster guys…but drama soon followed, as Mapelli slowed down dramatically with a “kangarooing” Audi R8; signs of an electrical gremlins that in the end would ruin his race. Balzan was thus the new leader at the midway point.

Soon Zonzini attacked and overtook Casè, while Benucci – a true gentleman driver – could only see his leading margin reducing by several seconds per lap. Further back, the “guy on fire” was Alessandro Pier Guidi, who was soon behind Mora. The young gun Mora put up a good defence, but Pier Guidi soon overtook the Mercedes and Bianco was next in his sights. Mora and Gagliardini were the next duelers, with perhaps “too much pepper” since the cars touched several times until Mora decided he’d had enough and pushed off the EbiMotors Porsche in a most ungentlemanly move. It was race over for the 2013 Champions, but a time penalty was handed, post-race, to the Mercedes.

On the same lap, Zonzini attacked and overtook Benucci and became the new leader. Casè was still third from Pier Guidi, the guilty Mora and Ferrara, who was the next “man on fire”. Pier Guidi in the last part of the race completed a monster recovery and got Casè for the third step of the podium; and that wasn’t all, because on the last lap he also passed Benucci for P2. 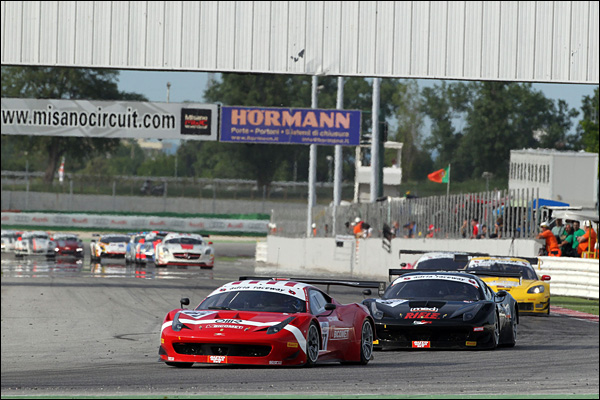 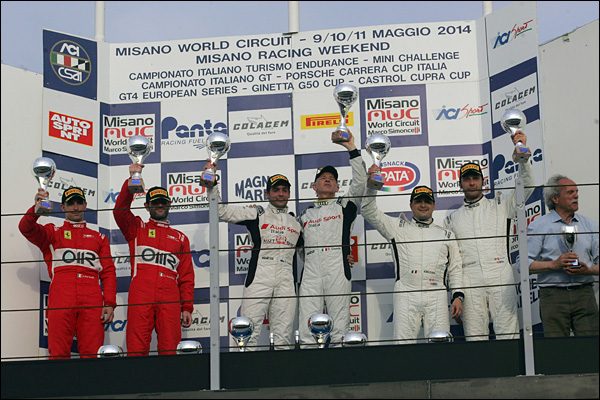 It was a depressing race for the other Mercedes of DeLorenzi-Amati – clearly not on pace – and the Corvette of Benedetti-D’Amico; these two finishing 11th and 12th. The spin and some technical troubles demoted the Lamborghini of Amici-Barri to 13th.

The Cup class was won by Bignotti in front of Passuti-Galbiati and Macori-Alessandri for an all-Porsche podium. 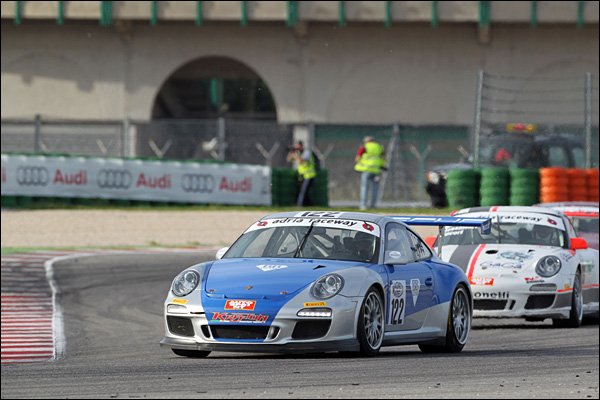 The weather was good on the Sunday for the start of Race 2, with the grandstands (unusually) almost full and the atmosphere electric as the green flag dropped in front of Pier Guidi and Barri; a start that was very fast indeed, since both the 458 and the Lamborghini decided to go pedal to the metal as soon as they exited the last corner. Pier Guidi outbraked Barri, while Ferrara kept third in front of Malucelli, Gagliardini, Frassineti, Pezzucchi, Schöffler – who was the biggest loser in the first few corners – De Lorenzi and Zonzini. Soon Pier Guidi, clearly faster than anyone else, began to escape from the pack, while behind the two Audi R8 smoked De Lorenzi. 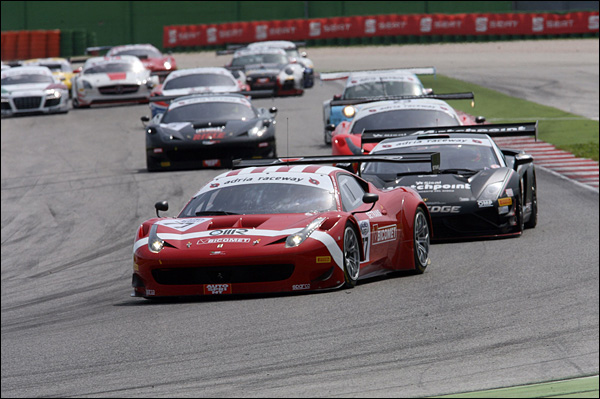 Meantime, Malucelli attacked and overtook Barri for P2 and began to chase the leading Ferrari of Pier Guidi, while Barri struggled to keeps an angry pack of eight cars nose to tail behind him.

In the next few laps Pier Guidi and Malucelli clocked times nearly as quick as pole position, and amassed almost two seconds per lap, while Barri tried every trick to make his black beauty Gallardo as wide as possible. Ferrara, Gagliardini and Frassineti were also engaged in a very hard, but clean, battle, but Gagliardini lost his spot to Frassineti.

Towards the rear, the Corvette continued to struggle, despite having the best top speed – almost 5kph faster than anyone else – while Bianco and Benucci were even further behind…

The order began to change behind the two “steamroller 458 Italia” when Gagliardini found the tiniest hole to overtake both Ferrara and Frassineti, while the two Audis got the better of the 911 of Pezzucchi…but Pezzucchi didn’t like the move and in the last corner made a dive-bomb pass on Zonzini, who exited very wide and enjoyed an agricultural excursion for about 200 meters. Zonzini continued safe and sound, but had lost three places.

But more drama soon followed, as Zonzini tried to overtake Casè in a very fast right-hander, without too much success. Casè didn’t give him space, the two cars touched and finished their race in the barriers with some significant damage. As a result, the Safety Car had to be deployed.

The recovery turned out to be a lengthy one and the pit window opened and closed while the race was still under caution. Strangely, not all cars decided to switch drivers immediately, with both Pier Guidi, Malucelli and Bianco staying out until later in the window. In the meantime, Pezzucchi had to park his 911 due to technical failure

Soon Giovanna Amati, perhaps the slowest second driver in the field, began to lose places in rapid succession and would finish the race more than one minute behind the winner and, again, out of the points.

The next move was made by Mapelli, who outbraked Barba for P2. Clearly, this was not enough for the young gun who attacked Donaviti at the end of the same lap to become the new leader. 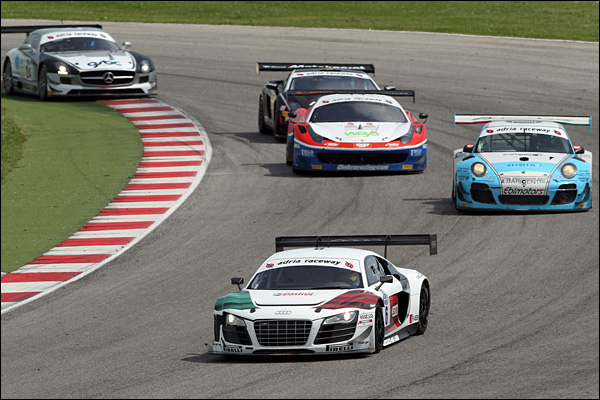 Balzan soon smelled fresh blood in his “red-vampire” 458 Italia and took a place from Mora on top speed; and, while Amici and Barba were exchanging pleasantries, established himself between the two .Oh, by the way – behind the top places, Babini began to clock fastest laps in succession and the gap to the front was going down lap after lap…

Mapelli was soon almost 10 seconds clear of the pack, but an error in the driver change resulted in a 10 second penalty, so Mapelli had to get pedal to the metal to keep the lead.

Now the battle was between Amici and Balzan for P3 and Barba and Mora for P5, while Donaviti remained second.

The final five minutes shook up the standings once more; not upfront, with Mapelli able to keep his advantage well over 10 seconds and overcome the penalty to win Race 2 for Audi, but Barba had to retire his 458 Italia with a right rear puncture, while Babini took Mora for P5. 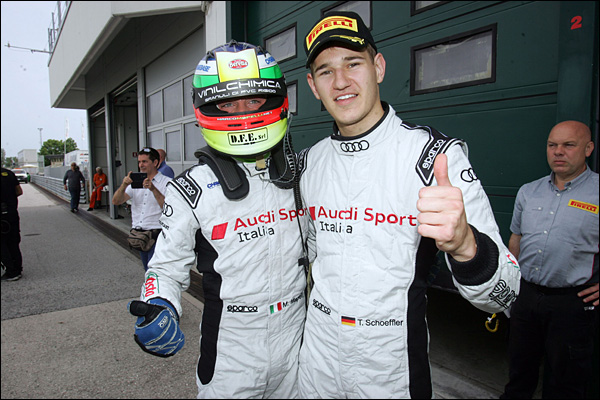 However, the biggest battle was for the podium places. Amici tried to attack Donaviti, who defended very well. Balzan smelled blood and, in a moment of lapsed concentration for Amici, overtook the Lamborghini. But as soon as the last lap began, another penalty was issued. Balzan was also guilty of a too-short short driver change and was handed three and half seconds extras. That was enough to stop his recovery run and, despite a last corner overtaking of Donaviti, he was classified fourth. The EbiMotors Porsche thus finished second and the Lamborghini third. Babini was fifth and the best SLS Mercedes with the very young Mora finished sixth.

The second Autorlando Porsche of Beretta-Carbini was seventh in front of Magli-Ferrara, Lucchini-Pier Guidi and, at last, a point for the Corvette of D’Amico-Benedetti. The other leading Ferrari of Galassi-Malucelli finish a lap down.

The Cup class victory went to the Antonelli Porsche of Christian Passuti and Massimo Omar Galbiati, ahead of the sister car of Marco Macori/Pierluigi Alessandri and the Bonaldi Gallardo of “El Pato”/Sebastian Maldonado. 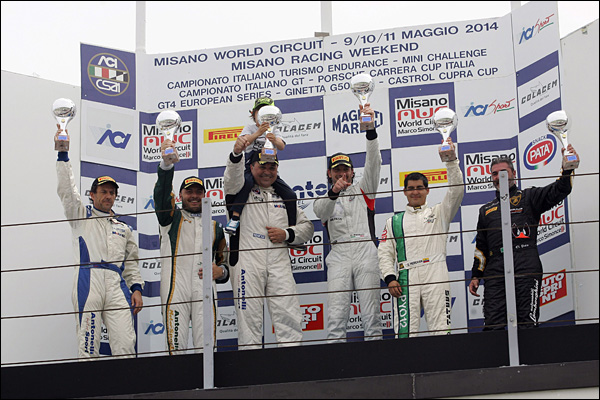 At the end of a very exciting weekend the much anticipated Ferrari domination disappeared like water in the summer sun. Audi won Race 1 in style and, with help from mistakes by others, won Race 2 also. Porsche, especially with the 2013 team Champion the EbiMotors, had two good races, but the anticipated Mercedes challenge didn’t materialise, although Mora dove well. 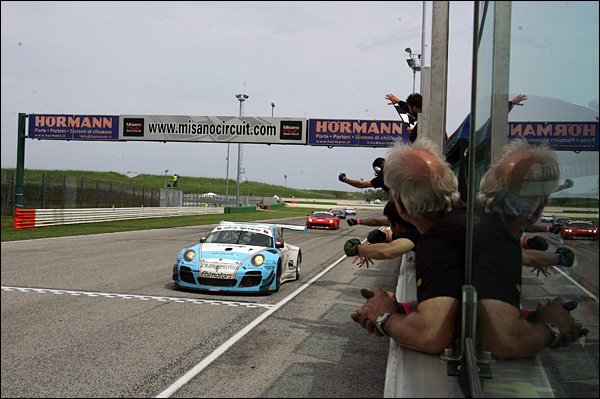 The Lamborghini was clearly very much more on the pace than it had been last year and could be a major player in the season, while the Corvette has a lot to do in the garage before Monza; the top speed not yet overcoming the other deficits of the car.

The next round is at the temple of speed, Monza, on the first weekend of June, where we will see the debut of the Nova Race Nissans.