Just like the three previous races the fourth VLN round of 2014 was greeted by beautiful weather in the Eifel region.

With 29 GT3 cars entered it was their final chance to get a pre Nürburgring 24 Hours tune up.

Shortly after the 90 minute qualifying session went green though it had to be stopped again due to a crash at the Metzgesfeld, one driver needed to be extracted from his car and all in all the session was halted for about an hour.

With the clock left running and little time added to it, it was a mad dash when the green flag came out once again. Coming out on top was the Black-Falcon Mercedes-Benz SLS AMG GT3, Andreas Simonsen put the hammer down and burned a 8:02.098 minutes lap into the tarmac. 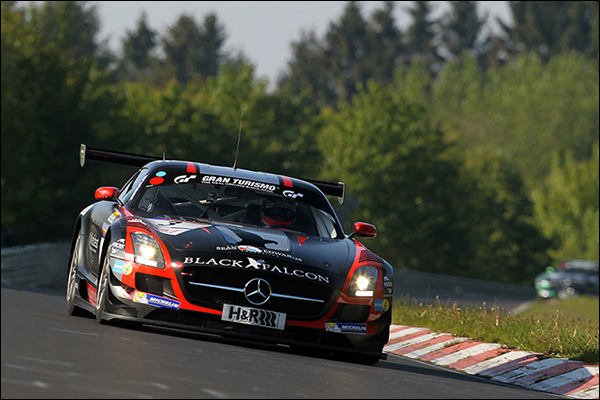 Due to the extra minutes added to the qualifying session the formation lap got underway about 20 minutes late.

When the lights went green Lance-David Arnold was able to take the lead, behind him Adam Christodoulou in the second Black-Falcon SLS and Chrisitian Hohenadel in the Rowe-SLS got by Klaus Abbelen in the Frikadelli Porsche.

After lap one the three SLS’ were still running nose to tail, behind them Kevin Estre in the Dörr-McLaren, Christopher Mies in the Prosperia-Audi and Norbert Siedler aboard the Haribo-911 were trying to catch up with them. In the following lap Estre was able to catch up with the three leaders, trying multiple times to get by Hohenadel.

The first four were running within 1 second of each other. With some of the lead cars already diving for the pitlane after two laps the picture up front started to get blurry. But nevertheless Kevin Estre was still on a mission getting by all the Mercedes-Benz SLS AMG GT3 up ahead of him and taking the lead on lap three. 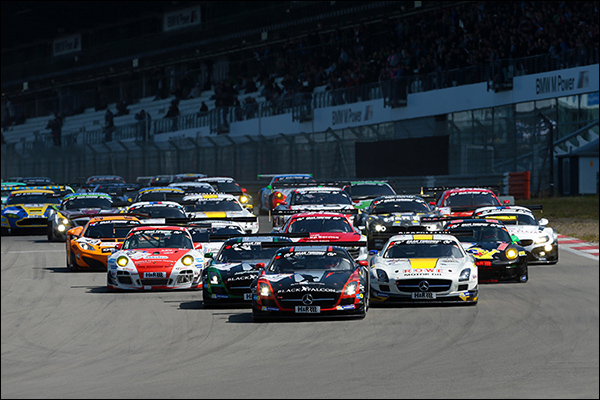 Also starting to charge through the field was Alex Buncombe in the GT Academy Nissan GT-R finding himself in fifth after three laps.

Up front Kevin Estre wasn’t able to get away from the two Black Falcon and the lone Rowe-SLS, Adam Christodoulou anchoring the hunt down of the French McLaren GT works driver. When Christodoulou dived for the pitlane after lap four and Christian Hohenadel stranding with a drive shaft problem minutes later it was just Lance-David Arnold left to hunt the McLaren down.

When the McLaren dived for the pitlane after six laps Arnold was able to regain the lead. The second Prosperia Audi was taken out of the race due to a technical problem and fire after about an hour, leaving just one of the Hankook shod R8s in the race. 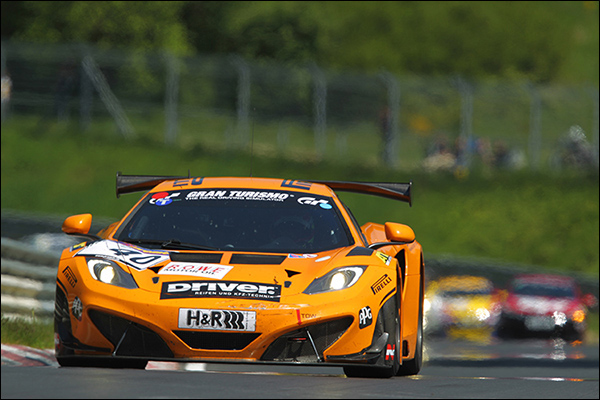 After the first round of pitstops the two Black Falcon SLS were back in the lead, with Adam Christodoulou holding a 13 seconds advantage over his teammate Andreas Simonsen. Behind them there was another nose to tail fight between the Dörr-McLaren, Frikadelli-Porsche, the Marc VDS BMW of Jörg Müller and Uwe Alzen plus the Jürgen Alzen Ford GT. These four cars were already 25 seconds back from Christodoulou. This gap arose mainly due to the teams being displayed a wrong mandatory pit stop time.

When Abdulaziz Al Faisal climbed aboard the leading SLS he couldn’t keep up the pace of the leaders and found himself in fifth after all his competitors did their pit stops. On lap 18 there was a crash on the Döttinger Höhe, resulting in a red flag and the race not restarted. Instead of the planned four hours it was scored after three hours and one minute and due to this fact full points awarded.

Lance-David Arnold, Andreas Simonsen and Christian Menzel made it a clean sweep of pole position, fastest race lap and race win in their Black Falcon SLS. Second place went to Jörg Müller and Uwe Alzen in one of the Marc VDS BMWs ahead of the Frikadelli Racing Porsche. Both the second and third place cars lost unnecessary time at their first pitstop due to being displayed a faulty mandatory pitstop time. 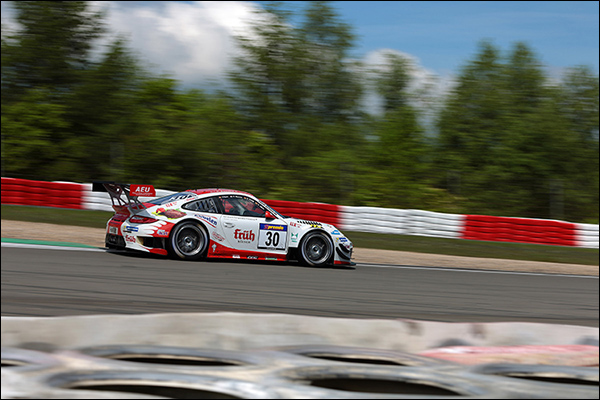 Fourth place went to Jens Klingmann, Claudia Hürtgen and Dominik Baumann in the lead Schubert BMW, ahead of the second Black-Falcon SLS. The Dörr-McLaren eventually crossed the line in sixth, one place in front of the remaining Rowe-SLS.

When the race was halted the car of Jan Seyffarth, Richard Göransson and Klaus Graf was actually not running anymore due to a crash. Another retiree but still being scored was the Uwe Alzen Automotive BMW Z4 GT3 of Uwe Alzen, Philipp Wlazik and Yelmer Buurman finishing in eight. The final top 10 spots went to the Falken-Motorsports Porsche and the second Marc VDS BMW. The works Aston Martin finished in eleventh, while the two Nissan GT-R NISMO GT3 were scored in 13th and 27th. 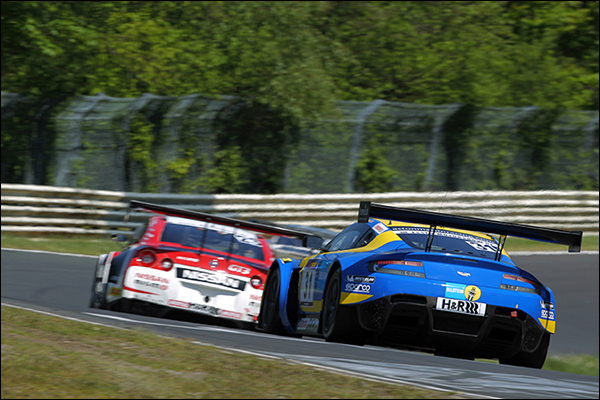 The next VLN round takes place on July 5th, but two weeks before that date we have the Nürburgring 24 Hours coming up.