Once again a welcome addition to another great weekend of IndyCar and Tudor Championship racing, the Pirelli World Challenge invaded the streets of Belle Isle Park, directly outside of Downtown Detroit, Michigan. 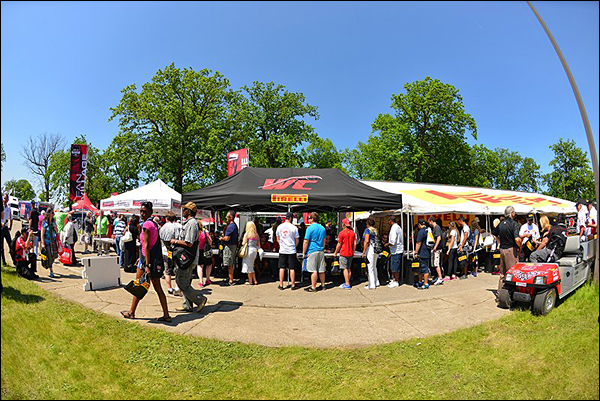 Although Detroit’s boomtown era of automotive manufacturing has all but subsided, a definite “car culture” still permeates this once-great town. Towering like a monolith over the urban sprawl, GM’s steely headquarters in the Renaissance Center reminds us of what was, and still is, America’s Motor City. Ford is also based in the Detroit area, in the nearby suburb of Dearborn.

Detroit was one of the hardest hit in America’s 2008 economic recession, leaving everything from its infrastructure to its citizens shattered, an empty shell of its former self. Detroit and urban blight are now almost synonymous, with abandoned factories and dilapidated houses serving as a grim reminder to what municipal mismanagement can really do to a place.

Despite the negative public perception of the city, one cannot emphasize enough that Detroit, bankrupt and all, is making a comeback. More jobs are being created and Detroit’s new mayor is convinced he can spur an economic reinvention. This energy, a pleasing mix of optimism and rebel spirit, seemed to flow into Belle Isle Park, with perfect conditions complimenting the picturesque scenery which more than 100,000 fans were expected to enjoy throughout the weekend. 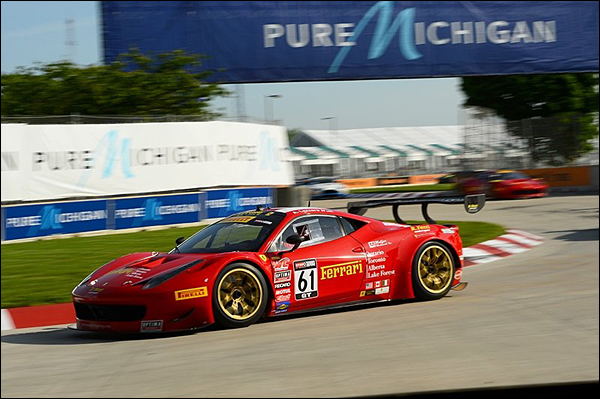 “It was super, super dirty out there,” said leader Lazzaro. “[It] felt like an off-road race on dirt, maybe because the off-road trucks were out first,” he joked.

Marcelo Hahn, a native of São Paulo, Brazil, led GT-A in his Reiter Engineering Lamborghini Gallardo FL2, clocking in at a 1:35.797. 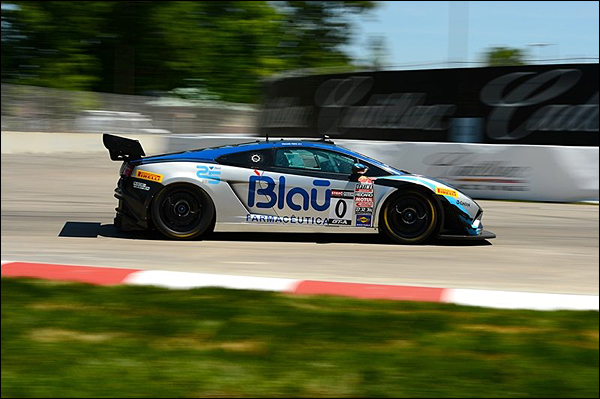 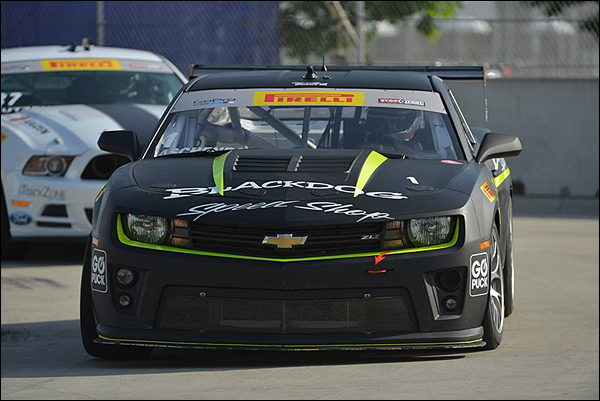 Times were expected to improve as the day wore on, which they did, to a tune of a full second. It was Johnny O’Connell who took his #3 Cadillac CTS-V R to the top with a 1:33.005, setting his best lap on his final one during the second of the 30-minute practice sessions on the 3.78-kilometre street circuit. The #9 K-PAX Racing McLaren MP4-12C GT3 of Alex Figge claiming a superb second, followed by Chicagoan Nick Mancuso in third. 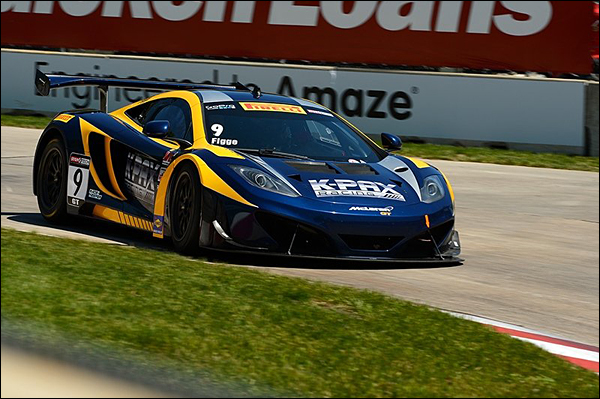 Qualifying began bright and early on a pleasant Saturday morning, and Johnny O’Connell pulled out all the stops to ensure his pole position for the race later in the day. He led over his teammate Andy Pilgrim by a miniscule 0.056-second margin, the two Cadillac drivers claiming a 1:31.899 and a 1:31.955 respectively.

“We knew we’d be quick. We went good without stickers on Friday,” said O’Connell. 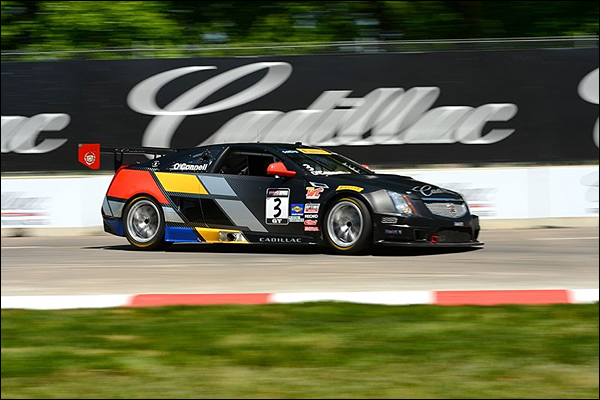 “On stickers, you can throw down some amazing stuff for two or three laps. I made two really good timed laps and I knew that was all had. But doing that here in Detroit is important.”

When the red lights turned to green, Johnny O’Connell made a fantastic start, leaving teammate Pilgrim to deal with a charging Mike Skeen, who eventually made it into second place after several side-by-side corners. 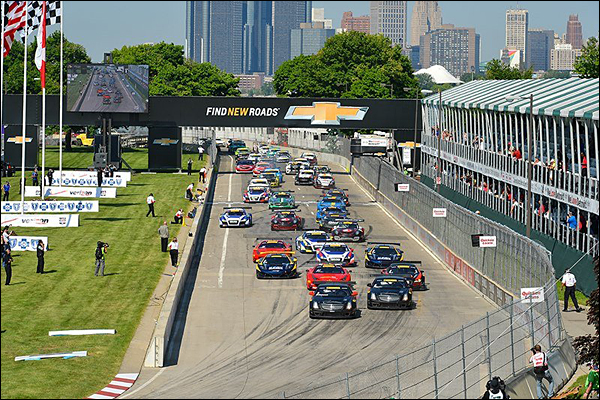 O’Connell led in a fashion uncannily similar to that of his race at Long Beach. Leading every lap, the Georgian maintained a steady gap to all of his competition and took the win in Race 1 at Belle Isle.

The real action took place further down the order. After taking the position back from the #2 Hawk Performance Audi R8 of Mike Skeen on Lap 7 after losing it on the first lap, Andy Pilgrim had an uncharacteristic off at Turn 3 on Lap 9, losing him several positions. It turns out the cause was a freak brake rotor issue, which forced him to come into the pits for service, dropping him down four laps and out of contention.

After a full course caution, the GT-A lead was given to the #80 Lone Star Racing SRT Viper GT3R of Dan Knox after problems for both Marcelo Hahn and Michael Mills. 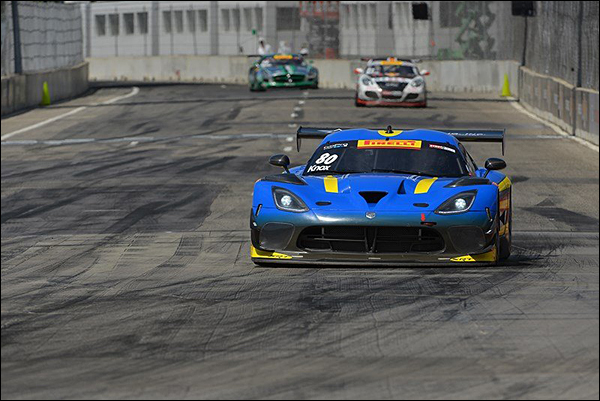 In a bizarre lapse of concentration, Hahn lost control of his #0 Reiter Engineering Lamborghini Gallardo FL2 on a puddle of water under the yellow flag, spearing into the safety vehicle collecting another wrecked car at the exit of Turn 6. 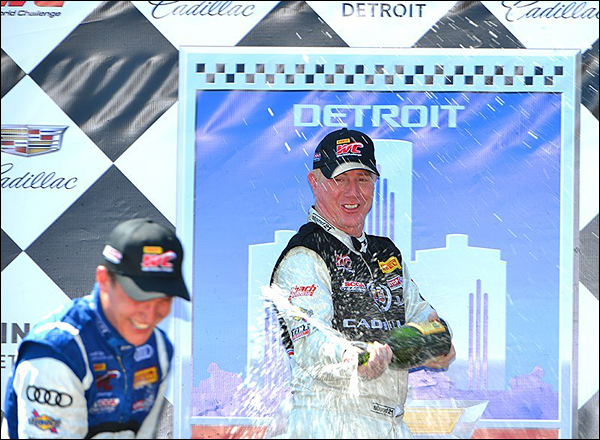 In GT-A, Dan Knox scored his first victory in the Pirelli World Challenge, also a breakout win for the SRT Viper GT3R.

“We struggled all day yesterday getting the setup right,” said Knox after the race. “But it was fabulous today. We had a great start, lost a couple positions but got some luck to make it back up.”

In similar style to O’Connell, GTS pole-sitter Dean Martin was able to hold off competitors from start to finish, the Detroit native taking a well-deserved victory at his home track in the #50 Rehagen Racing Ford Mustang. 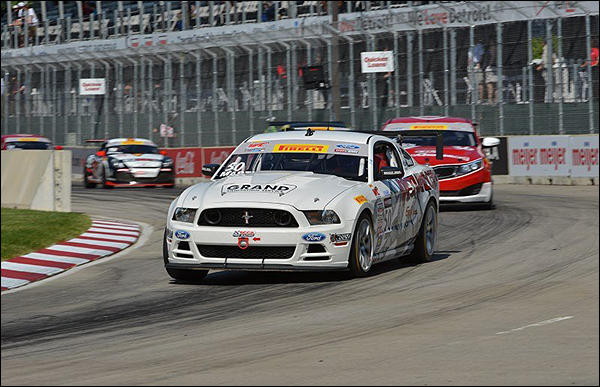 “This one’s a little better [than last year],” commented Martin. “After the controversy at Barber, with a brand new car here, it’s a great morale booster for us. The Ford Mustang needed it. It’s a great comeback for everyone at Rehagen Racing to get this new car ready.” 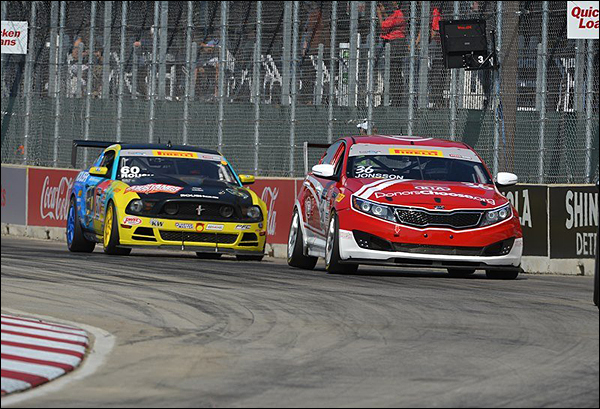 The starting grid for Race 2 on Sunday was determined by the fastest laps for each driver in Race 1, and pole recipients also received seven bonus points for their fastest laps in class. Thus, Johnny O’Connell once again started on pole after setting the fastest lap of Race 1, while teammate Andy Pilgrim started second and the #21 GMG Racing Audi R8 of Andrew Palmer started third. Mike Skeen, also driving an Audi R8, started in fourth. 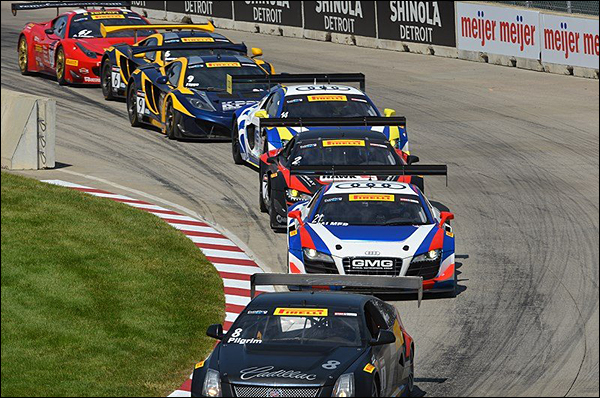 The aforementioned top four starters held their places from start to finish. Carrying his momentum from a victory in Race 1, Johnny O’Connell once again took his #3 Cadillac CTS-V R to the winner’s circle in Belle Isle. However, the win wasn’t quite as emphatic as on Saturday; slowed up by GTS traffic on occasion, O’Connell was caught by Pilgrim several times during the race, the latter of which never made an attempt to pass. The race, finishing under caution, saw Andrew Palmer lead Mike Skeen to line for third and fourth while Anthony Lazzaro made up positions from eighth to finish fifth.

“There are certain tracks that you know that you have to do well at. When we are on the street circuits we have an opportunity,” said an elated O’Connell after the race. “The hardest thing for any driver is winning the first time at any track, and once you win you wake up the next morning knowing that you can do it again.”

Marcelo Hahn clinched a victory in GT-A after making a critical mistake in Race 1. Starting in second, he made the pass on the #41 EFFORT Racing Porsche GT3R of Michael Mills for the class win. 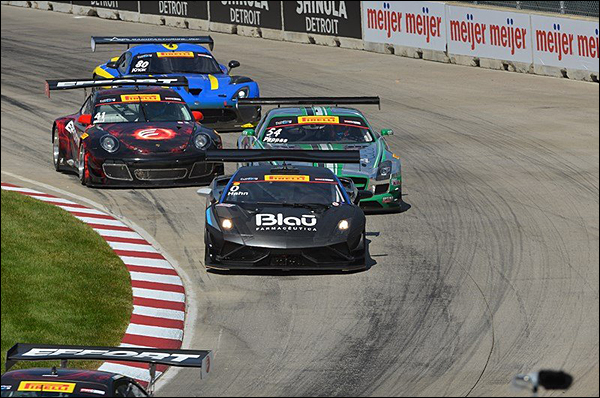 “I was in first place yesterday and made a mistake and my team spent all night repairing the car for today,” Hahn said. “In the beginning I was in second place and it was hard to pass Mills, but I got a chance and used it.”

O’Connell’s superb two-for-two result at Belle Isle means he’s the provisional GT points leader by a big gap, leading Lazzaro from 702 to 614. Andrew Palmer sits third with 579. In GT-A, Michael Mills leads with 325 points, while Tim Pappas and Henrik Hedman are tied for second with 307.

Dean Martin once again showed his dominance in the race for the GTS win, holding off all competition to take a flag-to-flag win over the #33 Capaldi Racing Ford Mustang of Tony Buffomante and the #38 Kia Optima of Mark Wilkins. 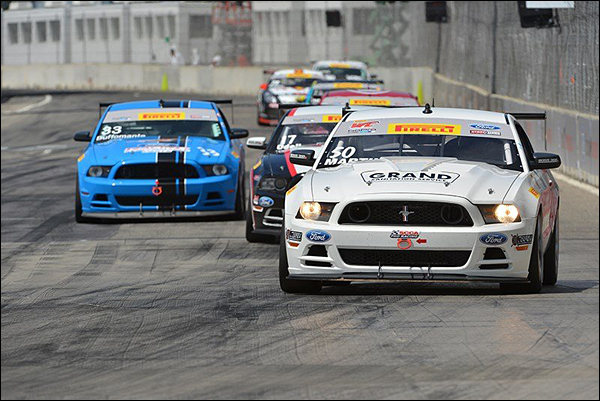 “We are committed to doing a full season in the series with our Mustang,” said race winner Martin. “The Mustangs really show their strength here in Detroit, our home territory. 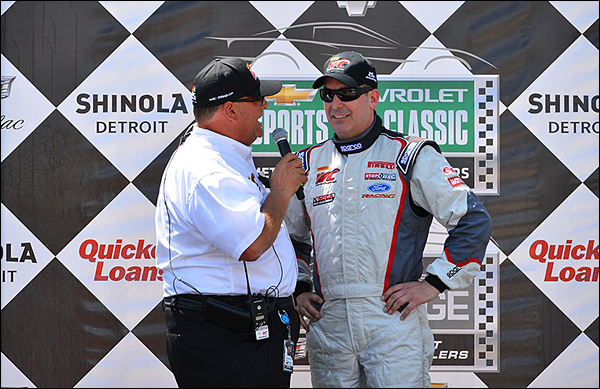 “It’s really great to bring home a win for Ford here. Hats off to our crew, brand new car that was originally built as a show car and we tore it down and took what was left from the race car from Barber.”

Originally running in second place was the young Alec Udell, driving the #17 Watson Racing Ford Mustang, until he made contact with GT driver James Sofronas at Turn 10, dropping him well out of contention for the victory.

On the same lap, Jack Baldwin made contact with Jack Roush Jr. at Turn 8, sending the hometown hero into the tire barrier and bringing out a full course caution that would unfortunately last till the checkered flag.

The Pirelli World Challenge will next travel a short distance across the Midwestern United States to Road America, one of the nation’s most famous racing circuits located in the scenic Kettle Moraine region of central Wisconsin. The action will kick off on Thursday, June 19 and finish up on Saturday, June 21.