Early trouble for the #92 Porsche, the car slowing at the second chicane with reported engine troubles, Marco Holzer bringing the car back slowly with a 19 minute lap, the team instantly garaging the car and going to work at the rear of the car, driveshaft failure the apparent issue.

Wolfgang Reip meanwhile was in trouble at the second chicane too, the #0 Nissan ZEOD RC stopped and being pushed to a place of safety. 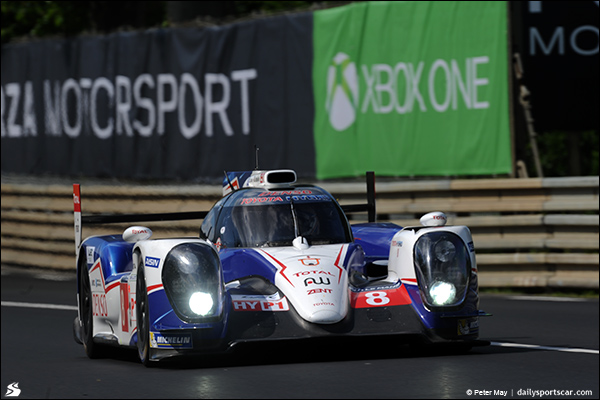 Franck Mailleux goes fastest in LMP2 with a 3:44.0 in the #34 Race Performance Oreca 03R Judd, that time though was beaten just before the half hour by Karun Chandhok in the #48 Murphy Prototypes Oreca Nissan, 3:43.6 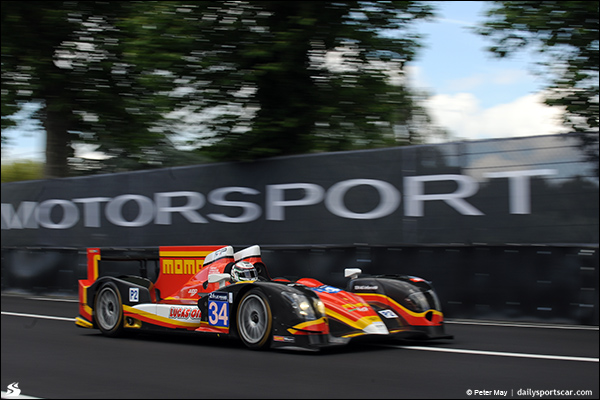 In the GTE Classes it was Nick Tandy in the #91 Porsche, rebuilt after its Test Day aerobatics with a 4:00.6 topping the times before Sam Bird in the #81 AF Corse Am Ferrari popped under 4 minutes, 3:59.497 as Pat Long (though shown on timing as Joe Foster) popped in the second fastest GTE time (4:00.3) in the Dempsey Proton Porsche 911 RSR, improving next time around to be second man under 4 minutes in the GTE standings. 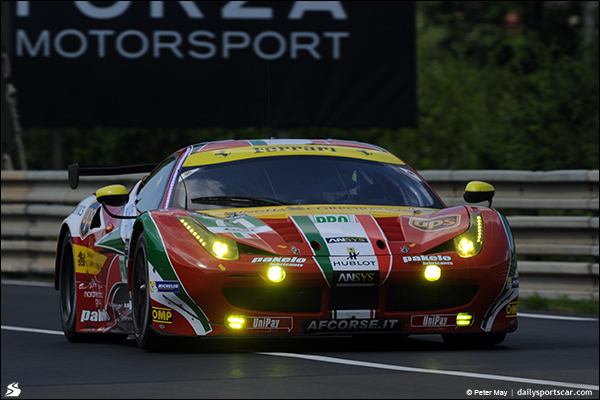 di Grassi continued his progress through the order by topping the times after 47 minutes, a 3:24.729.

A massive shunt for Loic Duval in the the #1 Audi in the Porsche Curves – huge damage to the rear of the car – Red Flags flying immediately with debris all over the track and damage to the fence and the concrete wall.

Loic is still in the car, the impact at the same place on track as Marc gene’s Test Day accident some years ago – Audi mechanics en route to the scene to assist with isolating the hybrid system and Eduardo Freitas also aboard a course car to inspect the scene.

The damage to the car and face is very extensive – Witnesses to the crash saw the Audi impact the debris fence airborne, backwards and roof first with damage to the stanchions and with the fence pulled right down.

All bodywork at the rear of the car is missing, and there’s bodywork damage too to the roof area.

After almost exactly an hour, with the clock still running, the session is restarted.

The early improvements come in GTE Pro with the #51 Ferrari going fastest, first into the 3:57s – 3:57.322 and the refettled #92 Porsche was soon in the mix too for a Ferrari 1,2, Porsche 3,4 – Olaf Manthey confirms that the issue for the #92 was a damaged driveshaft. 12 GTEs have thus far been timed under 4 minutes. 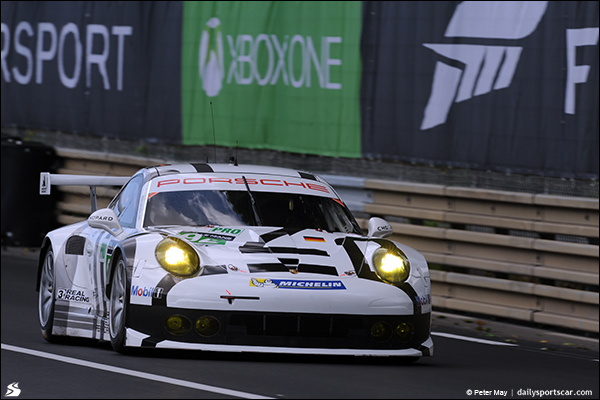 A posting on Audi Sport’s Twitter feed meanwhile confirms that “Duval is alert. He will be transported from the Medical Centre to the hospital for further examinations.”

A bulletin from the ACO meanwhile says the following:

At 17:05 today Wednesday 11 June, the No1 Audi left the track at very high speed at the Porsche Curves, at marshals post No.131. The incident occurred during the free practice session for the 82nd edition of the 24 Hours of Le Mans.

Conscious, the driver was taken onto the care of the ACO’s Medical Services, extracted from the car to an ambulance and then immediately transported to the Le Mans’s Centre Hospitalier where he will undergo further examination.

His condition is encouraging.

Allan McNish has gone to the hospital with Loic. The team examined all data before releasing the other two Audis to rejoin the session and have also had the opportunity to view circuit video of the incident.

The #50 Larbre Morgan, Ricky Taylor at the wheel crawls back to the pits after apparently suffering a left rear tyre failure on the Mulsanne, the whole tread area of the tyre left in the middle of the circuit before being collected by a marshall. 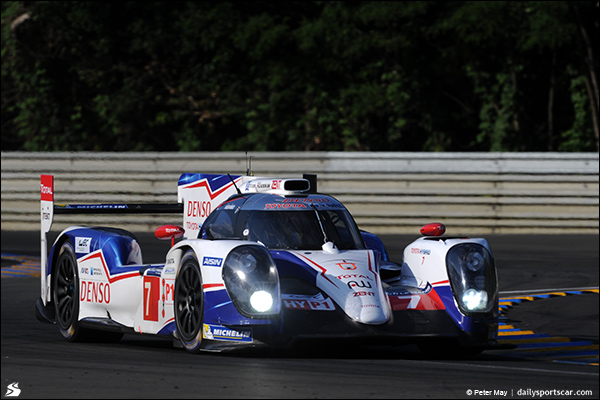 Michael Munemann has stopped at the Porsche Curves in the #41 Greaves Zytek Nissan, apparently after some contact with the wall.

Nicki Thiim posts the fastest time for an Aston Martin thus far, a 3:58.672 for the #95 GTE Am car, 4th fastest overall in GTE at present.

Not for long though as Thiim goes fastest overall in GTE 3:37.015, Darren Turner almost immediately up to second in GTE, and fastest in Pro, 3:57.086

49 minutes remaining and Pat Long goes second fastest in GTE Am in the Dempsey Proton #77 Porsche 3:58.4

Tommy Milner has ground to a halt in the #74 Vette drivers right just before the Porsche Curves whilst the #97 Aston Martin is reported to be losing fluid from the rear. 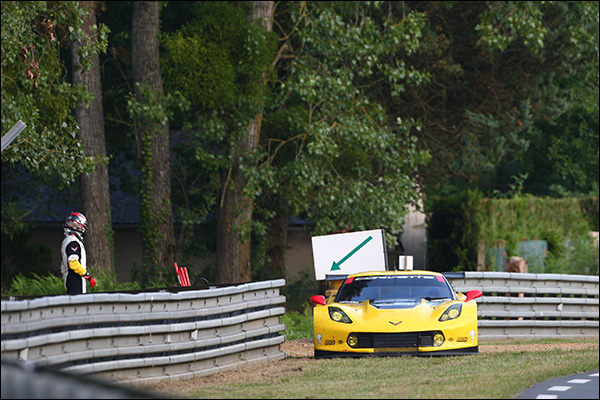 Jordan Taylor meanwhile improves in the #73 Corvette to a 3:58.1 4th fastest GTE.

Red Flag number 2 came out with 25 minutes remaining after Erik Maris had contact with the barrier at the first Mulsanne chicane, the car is being lifted onto a flatbed with a crane.

Markus Palttala and Erik maris are called to the Race Director. Both the #60 Ferrari and the #35 G-Drive Ligier Nissan are shown as stopped on circuit, no information on either.

The session goes back to green flag running with 15 minutes to go.

The red flags though are out again almost immediately as Frankie Montecalvo hits the barrier at the second chicane, debris on the track and the session will not be restarted.

Meanwhile Marshall Pruett at racer.com has reported that the #1 Audi will be rebuilt around a spare chassis, the damage from the Duval incident beyond repair.