Various snippets of news were of interest before the second session of qualifying got under way at eight on Thursday evening.

During the day we’d had confirmation that Marc Gené would step up to replace Loïc Duval in the #1 Audi, and his seat in the #38 Jota Zytek would be taken by Oliver Turvey. In addition, Craft Bamboo Racing announced that the structural damage to the #99 Aston Martin Vantage V8 had been too much for repairs to be completed ahead of this weekend’s 24 Hours, and the car had been withdrawn from the event. The good news was that Brazilian driver Fernando Rees had sustained just a bruised ankle in the accident, and was otherwise fine.

That saw the grid reduced to 54, with five of those yet to set times, including the #1 Audi, the #41 Greaves Zytek, the #67 IMSA Performance Porsche, the #76 sister car and the #90 8Star Motorsports Ferrari 458 Italia.

With another evening of near-perfect conditions in prospect, there was almost tangible eagerness among most of the teams to get their cars out on track and push for better times. It had been a hot day and track conditions were, if anything, better than they’d been on Wednesday, especially after lengthy sessions earlier in the day for Group C and the 62 entrants in the Porsche Cup support races. Just about every car joined the queue, waiting for the green light.

When the stream did head out onto the circuit there were several significant cars among them, including the #0 ZEOD RC, the #1 Audi and the #41 Greaves Zytek. The ZEOD pressed on, and with almost ten minutes of the session gone, recorded its first full lap of the circuit, Satoshi Motoyama posting a modest 3:59.953. It was good enough to see the garage 56 entry slot in 41st overall, and he then went on to complete a brief handful of additional laps, creeping up the order to stand 36th on best of 3:57.096 before returning to the pitlane . . . and coasting to a halt. 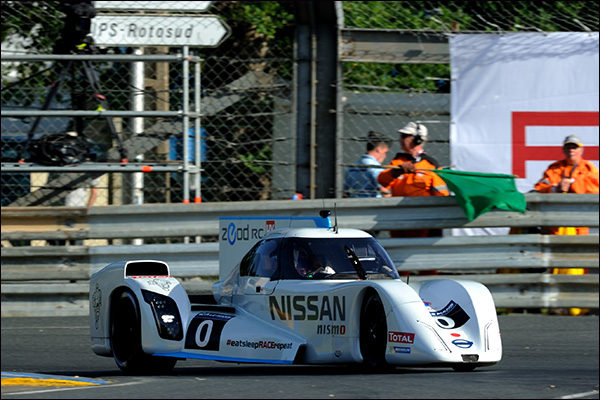 The return of the #1 Audi was less auspicious, at least to begin with. A series of out-in laps failed to see the car set a time, and with half an hour gone, the replacement chassis had still yet to trouble the order. Not so the #41, with James Winslow posting a 3:44.293 to slot in among the tail-enders in P2. 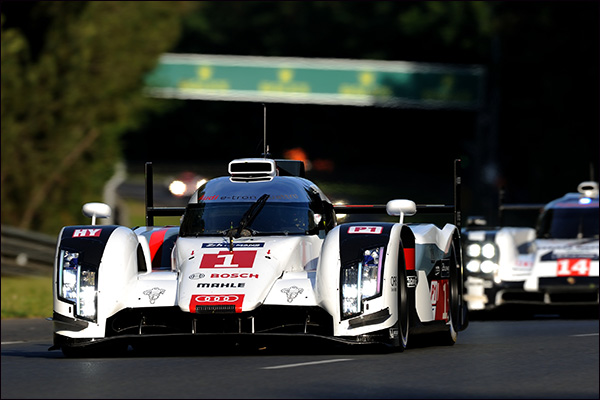 Overall, though, there were few cars setting improvements on their Wednesday laps, although Paul-Loup Chatin moved the #36 Signatech Alpine through to the top of the times in LMP2; his 3:38.768 being seven thousandths to the good of Pla’s best from the night before.

In GTE, however, the story was not so static, and a number of drivers were finding a few tenths here and there, including another quick lap from Nicki Thiim, slotting the #95 Aston Martin into third in GTE-Am. Other improvers in Am included the #66 JMW Ferrari, the #79 Prospeed Competition Porsche and the #98 Aston Martin. During the first forty minutes there was less movement in Pro, however, with only two cars clocking quicker times than they’d achieved on Wednesday – the #74 Corvette through to fourth, and the RAM Racing #52 up to sixth. 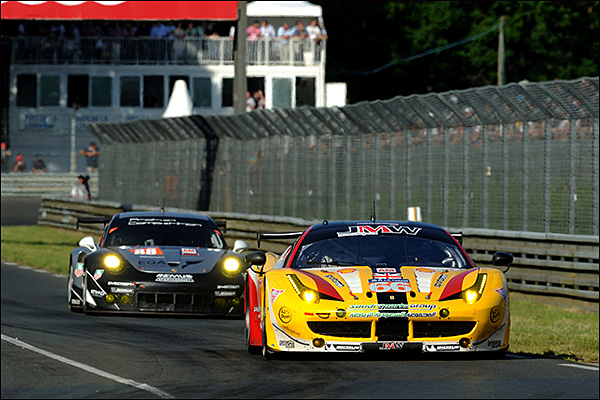 The first red flag of the evening came with forty-five minutes completed, when James Calado went off the track at MP121 in the #71 AF Corse Ferrari 458, near the middle of the Porsche Curves. James was sent off to the Medical Centre for a check-up, but news of the car was less forthcoming.

The session resumed with exactly fifty minutes to go, with two-thirds of the grid returning immediately to the track, including the ZEOD and the #1 Audi and the #76 Porsche – the IMSA Performance Porsche still yet to set a time. 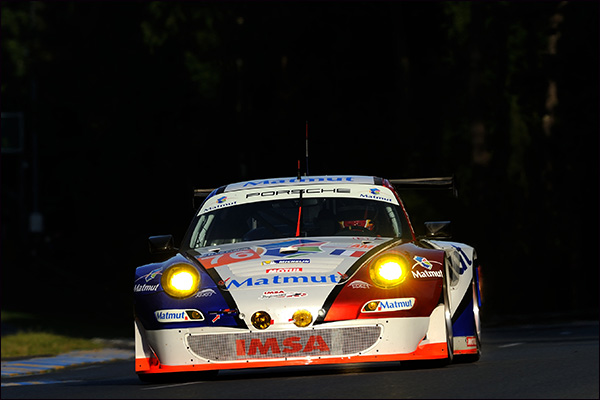 As has almost become traditional, those closing minutes of the first Thursday session, like the opening minutes of the second, offered some of the best conditions for quick times. In LMP1 there were some immediate improvements on the evening, but nothing that challenged the standing order from Wednesday – although Roman Dumas’s 3:23.322 was a better time for the #14, second for Porsche.

In LMP2 the changes were significant, with Nathanaël Berthon through to quickest in class with a 3:38.684 for the Murphy Prototypes squad, pipping the #36 into second. 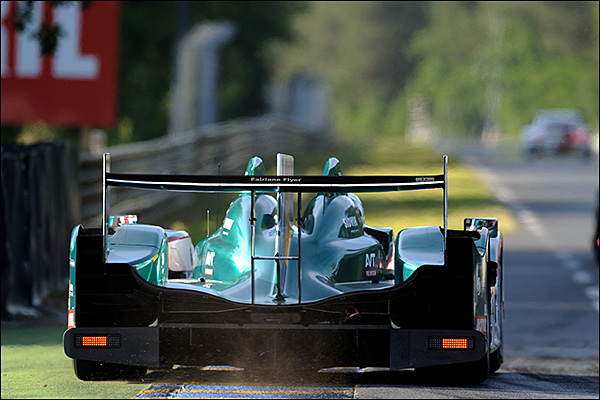 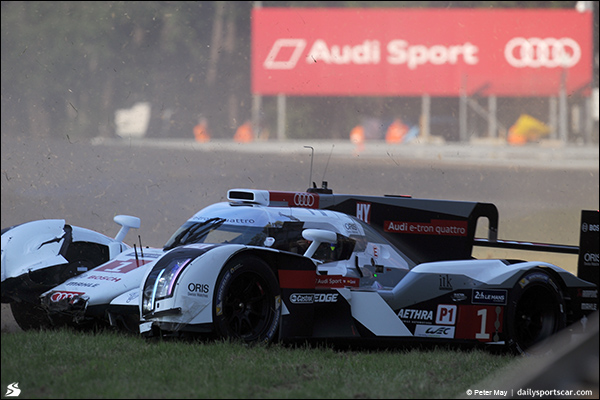 With 35 minutes still to run there was a nasty spin for Lucas Di Grassi in the #1 Audi on his out-lap, catching the front of the new chassis hard along the barriers at Indianapolis. He managing to get the damaged car moving again, and began a slow return to the pitlane. Elsewhere we had the #79 Prospeed Porsche rear-ending the tyre wall on the run up towards the Dunlop Chicane, sustaining significant damage.

That was being cleared away as the #1 Audi trundled through the Porsche Curves, smoke billowing from the front wheel arches as the damaged bodywork fouled on the tyres. As he neared the entrance to the pitlane, Di Grassi was being caught by a number of cars at speed. One of those was Leo Roussel in the #29 Pegasus Racing Morgan Nissan. As the blue car approached the rear of the slow-moving Audi, Di Grassi started heading to the right, as if to align on the entrance to the pitlane, but then inexplicably he twitched to the left. Roussel was unsettled, and forced over further to the left to avoid the weaving R-18, and clipped the grass. Out of control, the Morgan slewed to the right, across the front of the Audi, and slammed heavily into the concrete wall opposite. One wonders if Di Grassi will be sent a repair bill by Pegasus, although a fine of some proportion seems more likely.

The red flags flew once more, and with so many interruptions – for a second night in succession – the start time for the evening’s second qualifying period was brought forward to nine-thirty, and a final 15 minute flourish was scheduled for the first. It was enough for most cars to complete a couple of flyers and the first from Timo Bernhard was also a new quickest overall, posting a 3:22.908 to enhance the #20’s grip on provisional pole.

Within moments there were more shenanigans back at the Ford Chicane, a slow-moving works Porsche, the #92, was clipped forcibly across the bows by Raffaele Giammaria in the #60 Ferrari and both ended up in the gravel. The #98 Aston took avoiding action and joined them in the litter. The errant Porsche managed to limp back to the pits.

The waved yellows were timed just right for Nakajima in the #7 Toyota, who’d cleared the incident by the time they were flying, and he came through at the end of his lap with the incident cleared, and swept across the line with a 3:22.589 to lay a first claim to pole for Toyota. Olly Jarvis managed an improved time in the #3 Audi as well, and so too Buemi in the #8 Toyota, each before the chequered flag flew. Jarvis rounded off the session with a 3:23.271 to move up a place, but was immediately bettered by Roman Dumas in the #14 Porsche with a 3:22.708, who reclaimed second. 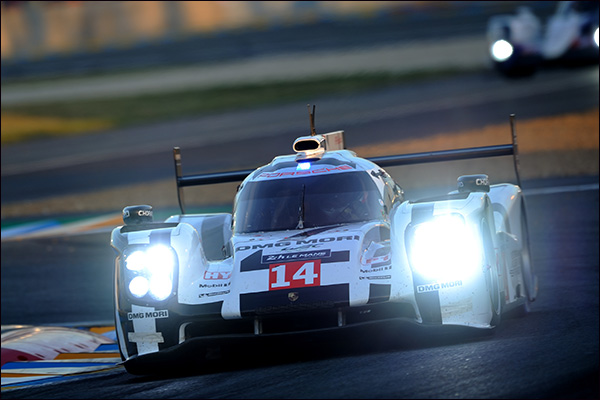 In LMP2, a final flying 3:38.094 from Tristan Gommendy in the #46 Thiriet by TDS Ligier snatched provisional pole from the #48 Murphy Oreca on the last lap. Those closing minutes held no such change in GT, with Gianmaria Bruni’s grip on GTE-Pro remaining secure from his Wednesday best, and the #72 SMP Ferrari similarly incumbent in GTE-Am. 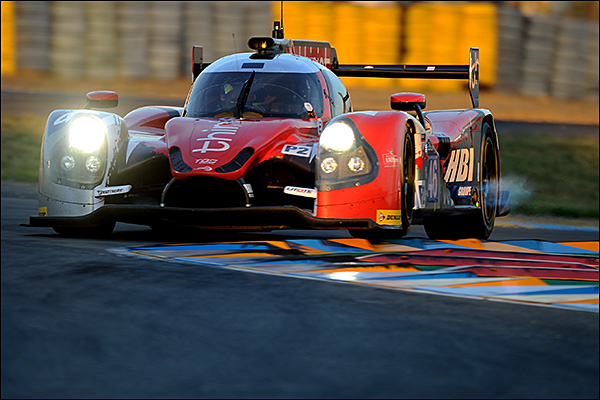 In the end those final minutes had just enough of thrill and tension to revive some flavour of what should have been an exciting two-hour session, had it not been so peppered by yet more accidents, red flags and needless incident. The lessons of Wednesday evening have clearly not sunk in.