The extended third and final qualifying session began bang on time at 21:30, with the sun not yet fully over the horizon. The hope was that this would continue in the same manner that the previous one had left off, but the fear was that more red flags would be flown before midnight arrived. With the first qualifying session on Wednesday evening having been so interrupted – and ultimately curtailed – by stoppages, the chances were that a large number of drivers would still have to complete their three mandatory night laps. 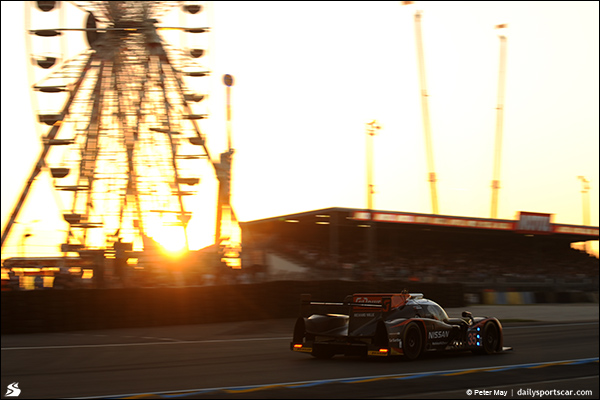 All the action in the opening stages of the session was in the LMP2 class, with Jann Mardenborough going second in the #35 G-Drive Ligier Nissan with a 3:38.184; but then being immediately displaced by Harry Tincknell who improved the #38 Jota Zytek Nissan by around seven seconds to move in to provisional pole. Mardenborough responded to go second with a 3:37.8932 – and we had only had 13 minutes of the session so far.

Sam Bird also made a significant improvement in the #81 AF Corse Ferrari to take provisional pole with a 3:54.665, and was second quickest GT overall. 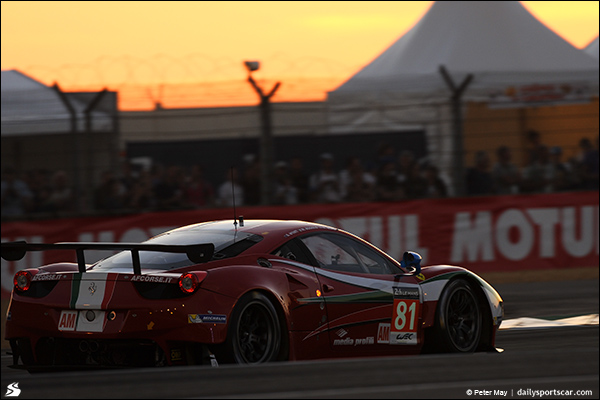 As things settled down after this early flourish, Paolo Ruberti brought the #90 8Star Motorsports Ferrari into the session after having sat out Q2.

With 20 minutes gone, the #91 Porsche 991 RSR of Patrick Pilet slowed suddenly along the start/finish straight and ground to a halt at the end of the pitlane. After an assessment, the car was instructed to be pushed into Parc Ferme and would play no further part in qualifying. The Frenchman was soon joined in the early bath club by Alvaro Parente, who lost the #52 RAM Racing LM GTE-Pro Ferrari under braking in the Ford chicane and hit the tyre barrier with enough speed to end its participation. The snatch squad was very quickly on the scene and the yellows were withdrawn just a couple of minutes later. 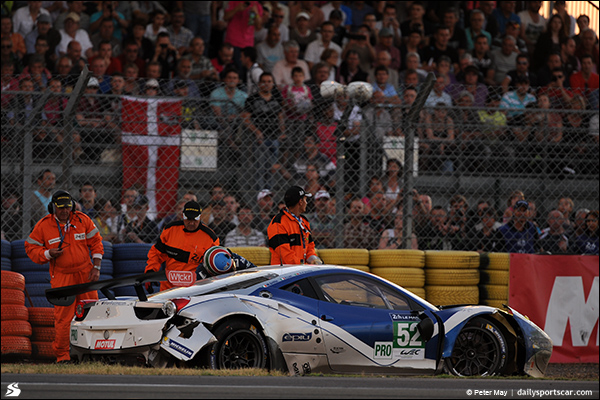 According to our calculations, the #97 Aston Martin and the #51 AF Ferrari were the only Pro cars to have got this far without problems.

As the session moved into its final two hours, Tristan Gommendy reclaimed provisional pole in LMP2 when he beat Tincknell’s time by a few hundredths in the #46 Thiriet Ligier HPD. Matthias Beche, meanwhile, had closed the gap to the factory cars to below four seconds in the #12 Rebellion R-One, but was still almost eight seconds off pole.

Pedro Lamy improved to second in GTE-Am in the #98 Aston Martin Vantage V8, but was still 1.3s off Bird’s time.

Things were still fluid in P2 after 40 minutes, with Nelson Panciatici taking fourth in the #36 Alpine Nissan, while both Nathaniel Berthon in the Murphy Oreca and Olivier Pla in the #26 G-Drive Morgan also improved their times in fifth and sixth. Ho Pin Tung, however, was having less success – entering the pits after slowing in the Porsche Curves and having taken more than six minutes to complete the final sector in the #33 Team Asia Ligier HPD.

A further improvement for Lamy reduced the advantage of the GTE-Am provisional pole-sitting Ferrari to just under a second, but Gianluca Roda found himself spinning into the Dunlop gravel unaided; fortunately, not deep enough that he couldn’t be quickly recovered.

Meanwhile, confirmation came through that James Calado had been taken to the local hospital for further checks, having received quite a clout to the head during his shunt. The ACO gave special dispensation for Calado to be replaced by Pierre Kaffer – who could do his night-laps in the #51 or #60 cars – and for the chassis to be replaced.

It was a similar situation over at ProSpeed, with the damaged #79 needing replacement and Bret Curtis in hospital for checks.

The first hour of Q3 ended with the #8 Toyota in the garage and with the front nose off; and with Stefan Mücke improving to second in Pro (still third GT overall) in the #97 Aston on a 3:54.891. Ten minutes later, Antonio Garcia retook the place by just over a tenth.

At the half-way point, more than half of the (surviving) field was in the pits and things had settled down considerably. Five minutes later, however, Lucas Ordóñez took advantage of the clearer track to set the Nissan ZEOD’s best lap so far; a 3:50.185 placing the Garage 56 entry 27th overall.

There was then quite a gap – about 25 minutes – before things started to get interesting again. Olivier Pla emerged from the G-Drive garage after more than half an hour and was clearly getting a hustle on. With 46 minutes to go, the rapid Frenchman went fourth in the #26 Morgan with a 3:38-dead and looked to be going equally rapidly on his next lap; alas, the #90 Ferrari of Frankie Montecalvo had just found the Porsche Curves gravel and the Slow Zone procedure was initiated for the first time since the Test Day, ruining Pla’s effort. The Ferrari was able to return to the pits under its own steam after being hoiked out of the kitty litter, but the Slow Zone would remain until the tyre wall was rebuilt and the circuit went fully green with 28 minutes to go.

That lasted ten minutes before, first, Simon Dolan had a spin at the Ford Chicane, and then Karun Chandhok had an off in the #48 Murphy Oreca at Indianapolis and ended its day against the tyre wall. The Indian driver was okay, but the ensuing Slow Zone would last for the rest of the session, meaning no further improvements. 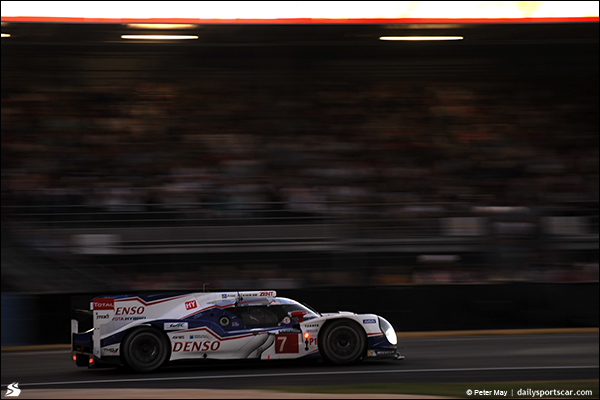 So the pole positions would go to the #7 Toyota TS040, the #46 Thiriet by TDS Ligier JS P2 Nissan, the #51 AF Corse Ferrari and the #81 AF Corse Ferrari; and all but the P2 car would receive an additional FIA WEC Championship point for their efforts. 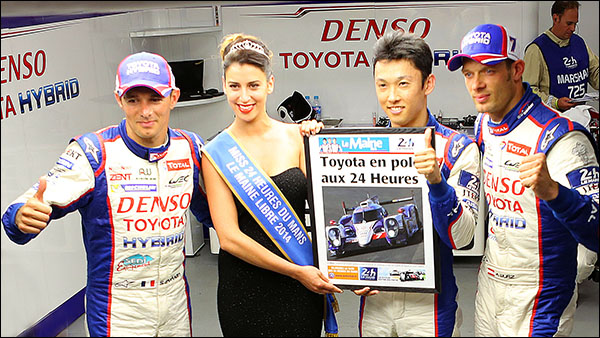 We’d find out on Friday how the numerous incidents would affect the final grid.