The pace didn’t let up as the race entered its second hour, with the #3 Audi of Marco Bonanomi getting third from the #2 sister car of André Lotterer along the Mulsanne Straight. Nicolas Lapierre was also joining in the fun in the #8 Toyota, giving us a three-way fight for second. Alexander Wurz led by 37 seconds, but a message on the screen showed that the #7 TS040 had been reported for an unsafe release, suggesting that it was now merely a case of deciding the size of the penalty. Lotterer retook second 12 minutes into the hour as the fight continued.

Alexander Imperatori continued his hugely impressive run at the head of LMP2 – the #47 KCMG Oreca Nissan leading the class by 20 seconds from the Ligier of Jann Mardenborough – while Matt McMurry ended his historic first stint in the #42 Caterham Zytek without incident. Unconfirmed reports, meanwhile, suggested that the #37 SMP Oreca was a retirement with a blown engine. 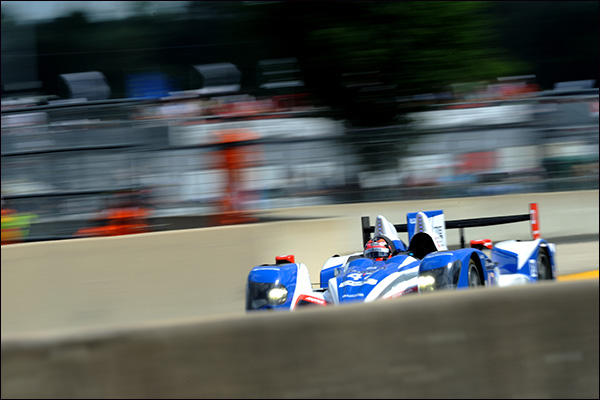 Gimmi Bruni’s advantage at the head of the GTE-Pro field was still just under two seconds from the two Corvettes, but these three were beginning to pull away from Darren Turner in fourth. Sam Bird still led GTE-Am, but now by 11 seconds from Nicki Thiim who had swapped places with the SMP Ferrari of Andrea Bertolini. 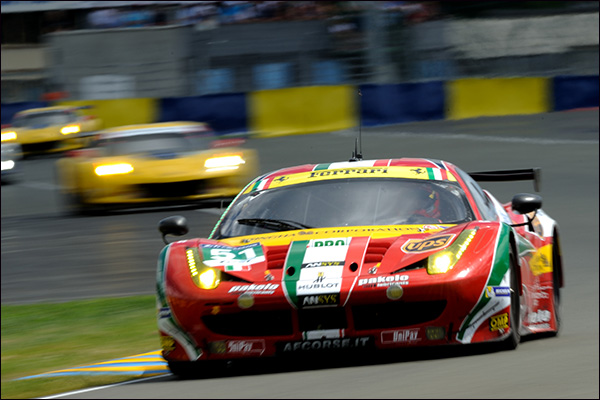 Nic Minassian confirmed to Stephen Errity that the #37 Oreca was indeed a retirement; “We didn’t have good single-lap pace but were happy with our race pace. Our problem is 100% engine failure – it exploded suddenly, which is annoying as it was a new engine fitted on Thursday. We had an alarm earlier in the race, which we thought was a sensor failure, so we reset the system – the engine failed soon after. I’m going to hang around to see if I can help out with the #27.”

The rain that had forecast arrived pretty much on time after 85 minutes of the race had elapsed, and within five minutes was coming down heavily across the full circuit. 7, 3 and 8 all stopped for tyres, but chaos was about to break out.

Several cars spun in the ever-worsening conditions, but then the LMP2 –leading Oreca – Richard Bradley now at the wheel – found itself without any grip as it approached the first chicane and hit the tyre wall hard. The conditions were now at their worst and further back down the track a huge accident was unfolding involving at least five cars. Although it was difficult to get a full picture, it seemed that one of the GT Porsches was scraping along the barrier when Nicolas Lapierre lost control of the #8 Toyota and hit the barrier next to the #3 Audi. Marco Bonanomi managed to avoid this incident but was then rear-ended at speed by the GTE-Am leading #81 Ferrari of Sam Bird. The Safety Car was scrambled to clear this all up and repair the damaged barriers, but we had lost the #3 Audi and #81 458, while the #8 managed to get back to the pits after a long delay. 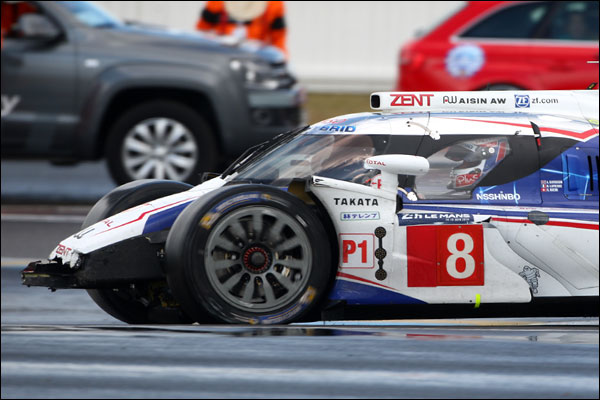 Bradley also drove his car back to the pits, but somehow managed to hold on to second place after a stop to repair the damage. Frank Mailleux now led the class in the #34 Race Performance Oreca Judd. Happily, all drivers appeared to have escaped unhurt.

A Porsche Manthey engineer: “Fred Makowiecki was at the wheel. He just lost the car in the wet with other cars around him. The damage was quite light, so we brought him in and sent him straight out again. There is no particular strategy – we can’t plan ahead at the moment, but whatever we did we did right as we’re now leading the class.”

Ralf Jüttner, Audi Sport: “The #3 retirement was because of a total lack of drive. The impact broke the gearbox and broke it away from the engine.” 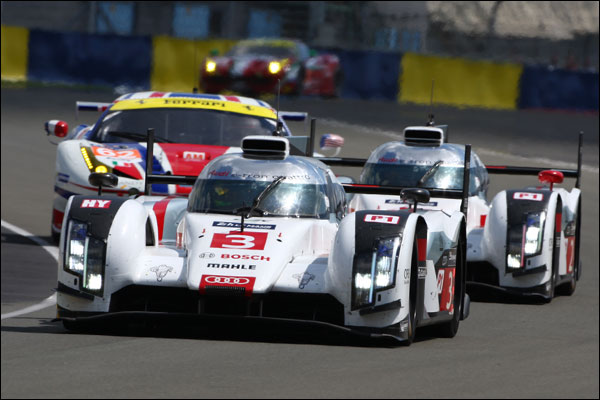 Simon Dolan, #38 Jota Sport Zytek Nissan: “The car was brought in quickly under the Safety Car to replace a number panel. Other than that it’s been a routine run so far – nothing to report.”

The rain had stopped, but the caution continued.