Porsche contined to lead as the fourth hour of Le Mans 2014 began, Bernhard just nine seconds to the good over Sarrazin’s #7 Toyota, but with only two stops completed to the Toyota’s three. Treluyer meanwhile had got the #2 Audi back on to the lead lap by the time Kristensen made the #1 car’s fourth stop to hand over to di Grassi.

In GTE Am, the #77 Porsche lost the class lead to Pedro Lamy’s Aston Martin after two slow laps for Pat Long, still on slick tyres on a fairly wet track. GTE Pro continued to be led by the works #91 Porsche, currently driven by Jorg Bergmeister, ahead of the #92 sister car with one fewer stop done and third-in-class Toni Vilander in the #51 Ferrari.

In P2, OAK Racing Team Asia’s Adderley Fong had an off at Indianapolis in the #33, requiring the intervention of a snatch vehicle to get going again. Once recovered, Fong pitted by stayed in the car.

P2 leader Mailleux brought the Race Performance Oreca in on Lap 42, the team electing to fit slicks as Paul-Loup Chatin temporarily moved into the class lead in the #36 Signtatech-Alpine.

Another car ended up in the gravel at Indianapolis: the #60 AF Corse Ferrari of Lorenzo Casse, which just missed a Toyota as it locked up and went straight on. 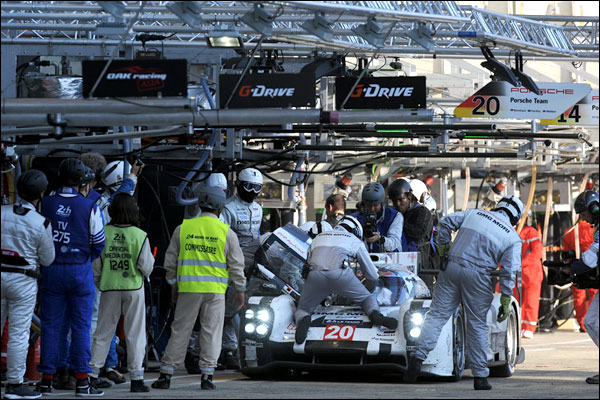 The lead passed back to Toyota on Lap 43 as Bernhard pitted the #20 Porsche, putting slicks on and handing to Brendon Hartley. The car came out in third, behind Treluyer’s #2 Audi, which was 52 seconds down on Sarrazin in the lead.

Elsewhere, the #41 Greaves Zytek was confirmed as a retirement at 6:22pm – the suspension damage from Munneman’s accident proving too severe to repair as the suspension mounting point had been pulled out of the tub.

Once the P2 pitstop cycle had completed, Race Performance was still in the lead – Michel Frey just ahead of Alex Brundle in the #35 G-Drive Ligier, with Gary Hirsch a lap down in third #43 NewBlood Morgan.

Having gritted it out on slick tyres, Pat Long was now lapping competitively and leading both the overall GT rankings and GTE Am for Dempsey Racung, but the big battle was for the GTE Pro lead, where Jorg Bergmeister was being harried hard by Tommy Milner’s Corvette. The young American snatched the lead with a clean move down the inside on the way into Indianapolis on Lap 48.

Sitting second and third in GTE Am half-way through the hour were the #98 Aston Martin of Christoffer Nygaard and #53 Ram Racing Ferrari of Archie Hamilton.

Johnny Mowlem, #53 RAM Racing Ferrari 458: “It’s nice to be right up there. Our race pace has been good; I could see Pat Long ahead of me and was keeping pace with him. The team told me to box but I stayed out – I don’t think any of us realised how heavy the rain was going to be. I was in third gear along the Mulsanne, and it’s the straights here that are the problem when it gets wet. You can feel your way through the corners, but on the straights it’s really bad – the car can just snap completely sideways on you with no warning!”

A pitstop for the #77 Porsche ended Long’s time in the overall GT lead as Patrick Dempsey climbed aboard to begin his first stint, promoting Nygaard to the front.

Into the last 15 minutes of the hour, Hartley moved into the lead as Sarrazin pitted, while fourth place in LMP2 changed hands in favour of Thiriet by TDS Racing – Ludovic Badey getting past Gary Hirsch’s Newblood Morgan on track with 50 laps done. 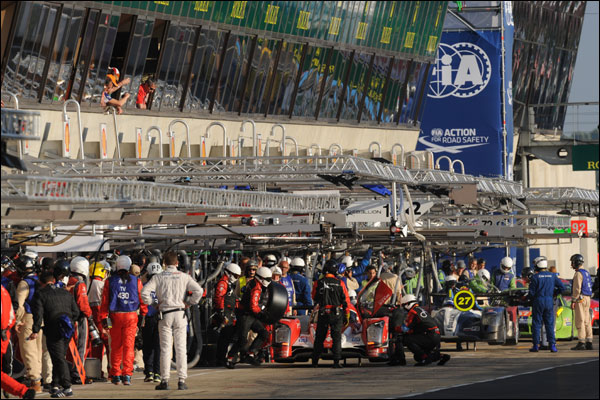 Brundle pitted the #35 G-Drive Ligier for fuel from second in class, having failed to find a way past Frey in the preceding laps. Sarrazin came out 20 seconds behind Hartley, but was immediately lapping faster and had the gap down to 12 seconds as the hour drew to a close. Treluyer and Di Grassi continued to circulate in third and fourth overall in the #2 and #1 Audis.