The times were reset, and the top 30 cars lined up on the start/finish straight for the shootout with cloudy skies and occasional light rain around the circuit. Dörr Motorsport would continue their dominance, after Frenchman Kevin Estre put up an absolutely blinding lap in the #66 McLaren of 8:10.921 – obliterating the previous record pole time of 8:17.212 set by the #4 Phoenix Audi last year.

As the cars started their first laps, it was a surprise to see the #24 Schulze Motorsport Nissan GT-R emerge from the garage to take part in the session after Jordan Tresson’s huge incident yesterday. The right-side panels were all replaced overnight, but the repair work done wasn’t enough to get it through the shootout as the GT-R pulled off the track before setting a flying lap.

Before the session, another Nissan was in trouble. The #30 Nissan GT Academy Team RJN car was handed a five-place grid penalty, after Micheal Krumm was caught speeding in a slow zone. Krumm put it 15th in the session, but will start as a result start the race 20th.

The #3 Phoenix Racing Audi was the first car to set a particular competitive time as the first batch of runners came through – Frank Stippler setting a 8:14.868, but he was soon bettered by Estre’s record breaking lap, the #25 Marc VDS BMW of Maxime Martin and then the sister #4 Phoenix Audi of Chris Mamerow. Mamerow’s lap of 8:14.412 was good enough for second at the time, pushing the VDS BMW to third and the #3 Audi to fourth.

“The car was understeering on the Grand Prix circuit, but once I got on he Nordschleife the car felt great,” said Estre. “I took quite a lot of risks in the fast corners, I was really on the edge. I’m really happy with the lap.”

On the second flying laps for the teams, there were not too many changes. Estre backed off knowing his time was good enough for pole, and the two Phoenix Audis wouldn’t improve either. Nevertheless there was some shuffling throughout the 29 runners left circulating. 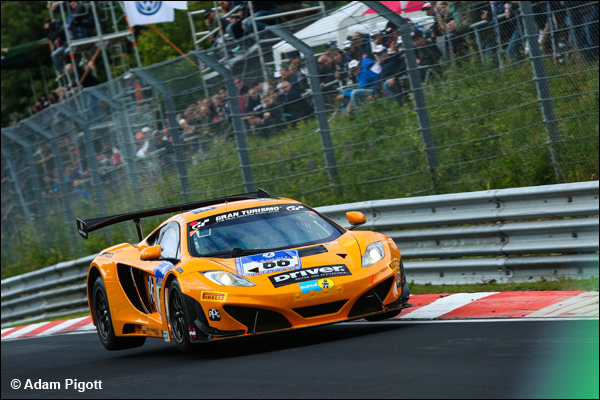 Maxime Martin wasn’t content with third on the grid and was able to better his first time, leapfrogging Mamerow to claim second for the Belgian squad – a 8:13.497 which was still two and a half second’s off Estre’s blinder.

“We are really happy, to be on the front row here is always good, but we have to be strong for the 24 hours to win here. The BMW is a great car here and we have a strong line-up so we will see,” Martin said after The Shootout. 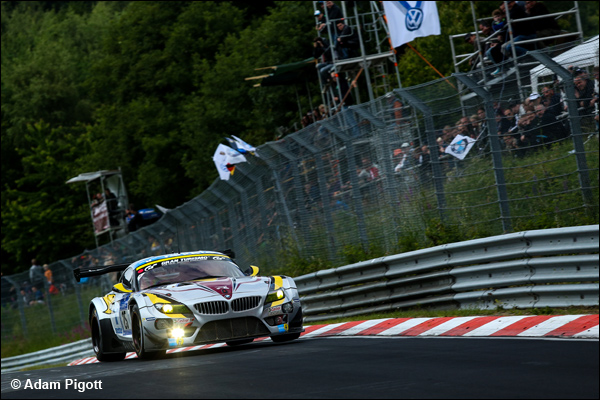 The #14 Black Falcon Mercedes also jumped up the screens to claim fourth, pushing the #3 Phoenix Audi of Stippler. A very impressive time of 8:14.294 by Adam Christodoulou, making the #14 the fastest SLS out there, the sister #1 car almost a second back in 7th was the nearest Mercedes to the Brit.

Aston Martin Racing had a quiet first flyer. Stefan Mücke was in the car for the shootout, and could only squeeze a lap good enough for 16th first time round. But the German veteran was able to secure a top 10 spot for the British marque on his second tour with a 8:15.834 putting it 9th. 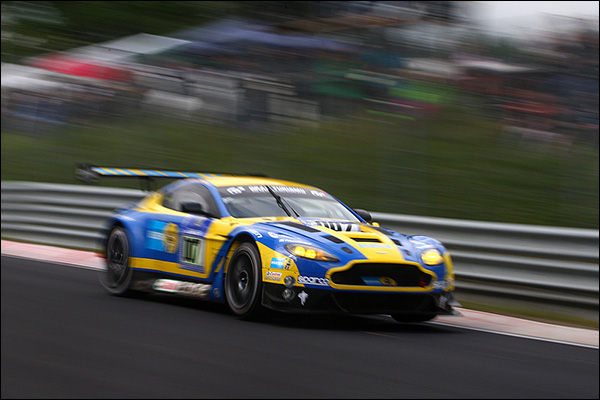 The quickest Porsche runner was the Falken Motorsports entry down in 20th, but this unusual feat was partly due to the Haribo Porsche not really featuring. Norbert Siedler was behind the wheel of the #8 911 GT3R and was only able to set an uninspiring lap of 8:23.091 on his first flyer. But to make matters worse, the engine blew on his second lap; they’ll need a spare if they are to take part in the race tomorrow.

Tomorrow’s race starts at 16:00 local time here in the Eifel Forest where the huge field of 160+ cars will take to the gruelling circuit to try and win the Nürburgring 24 Hours.