It left the P2 team fuming as Alex Brundle was powerless to resist the clear power and torque advantage of the #90 Spirit of Daytona Corvette DP of Richard Westbrook. 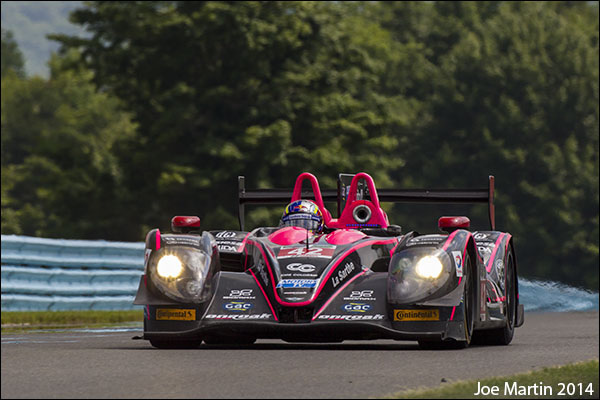 The race went back to FCY almost immediately as Scott Pruett and Renger van der Zande tangled but again Brundle had no answer to the DPs advantage as the race went green with 8 seconds remaining, the advantage under a second at the flag.

“Richard and my approach for the last couple of races was to keep the car safe and be in a position that would allow us to take a podium or possibly the win. It’s worked for us the last two races.”

“It’s a massive relief for us to get a victory,” Westbrook said. “It’s been a bit of a dry spell for us, especially on the back of a successful 2012. We’ll take that win for sure.” 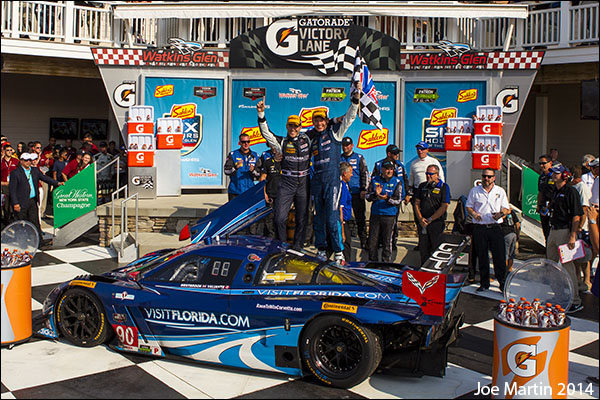 Brundle and his #42 OAK Racing Morgan/Nissan co-drivers Gustavo Yacaman and Ho-Pin Tung all led this one in their respective stints:

“It’s been a tremendous effort from my team and both teammates,” Brundle said. “We made a step forward in pace, understanding the car and understanding the tyre. I think we can go away happy but we did kind of snatch defeat from the jaws of victory a little bit.”

Brundle, who started the race from the pole position, grabbed the lead on Lap 170 after Valiante brought the #90 to pit road for tires, fuel and a driver change with 48 minutes remaining in the race. An accident between Alex Tagliani and Ian James brought out a full-course caution, giving Westbrook the opportunity to catch Brundle. 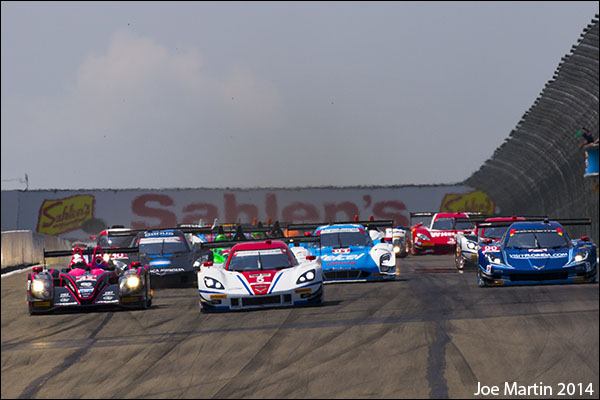 Brundle had one last chance to track down Westbrook when Scott Pruett, the #01 already delayed after a clash with the #73 Porsche left the Riley Ford with heavy rear end damage, was spun by Renger van der Zande with 10 minutes remaining but the DPs power advantage was obvious. 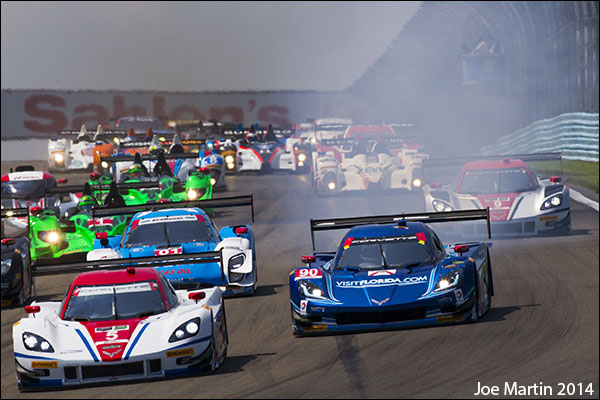 “I’m really proud of the team, the guys worked really hard on the car last night,” Yacaman said. “They stayed up until 1 a.m. making some updates to the car and getting it ready for the race.

“Every race we’ve started we’ve been consistent. We keep moving up the ladder on the podium. We really need that win, we’re looking for that win. We’ll keep working, working hard until we can get the win.”

Wayne Taylor Racing teammates Ricky Taylor and Jordan Taylor finished fifth, after Max Angelelli was dealt a stop and 60 second hold for missing the red light at pit exit earlier in the race, but were able to maintain their TUSCC Prototype lead in the standings.

It was a dire race for the ESM Racing crew with both cars hitting trouble, the #1 car being hit by a GT car causing damage that would drop the car out of contention and the #2 suffering electrical issues that would cause a delay from which the challenge would not recover. 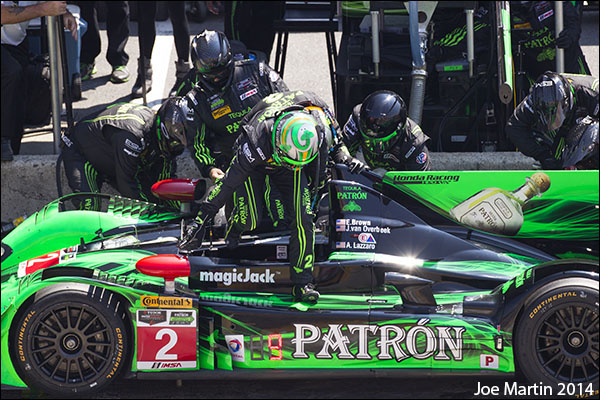 Despite taking pole position, the team wasn’t in front of the Prototype Challenge (PC) class until the 40-minute mark in the race. That was short-lived, however, lasting only three laps. From there, the team was in trouble, falling a lap down.

“I was in a pretty good dogfight with some GT Le Mans cars,” Bennett said. “I had some momentum and I popped out to make a pass in the bus stop (chicane). I was between corner worker stations and I realized I was going really fast and everyone else was going really slow. I was hoping no one noticed but they did. So we had a drive-through penalty for that. That got us a little bit behind.”

Braun and Gue were able to make up the difference, with Braun grabbing the lead for good midway through the fourth hour. The victory extends the PC points lead for the #54 CORE autosport ORECA FLM09. 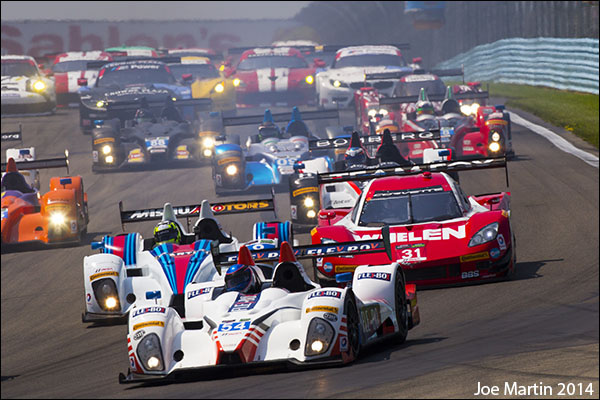 “The result we wanted here was getting the win,” Braun said. “It’s really cool to be able to win these and it helps us for our quest for the championship as well. We’re just trying to get better and improve and keep going on for the next one.”

They team has won all three Patrón Endurance Cup events and lead those standings as well.

“It’s quite an honor to have done well in those races that are a part of the Patron Endurance (Cup),” Bennett said. “It’s the most important endurance races in North America this year, and to kind of highlight them and put them on a pedestal of the championship themselves, it’s a testament to doing so well.”

Corvette Racing took the GTLM win at the Glen with Antonio Garcia holding off the #91 Dodge Viper SRT GTS-R of Marc Goossens on the last-lap restart.

That left Garcia and his team-mate in the #3 Corvette C7.R in victory lane for the third straight race.

The #3 Vette also led at the halfway mark to score maximum points en route to a Round 3 victory in the Tequila Patrón North American Endurance Cup. 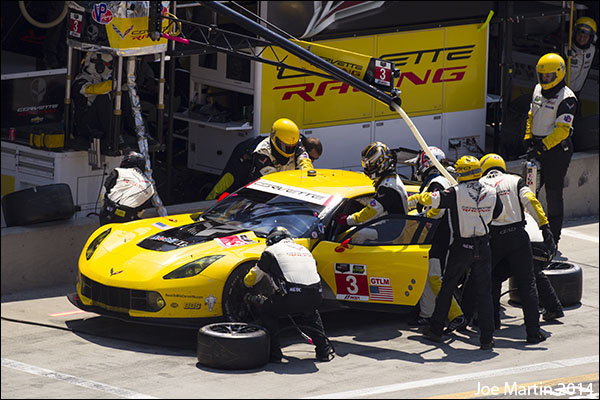 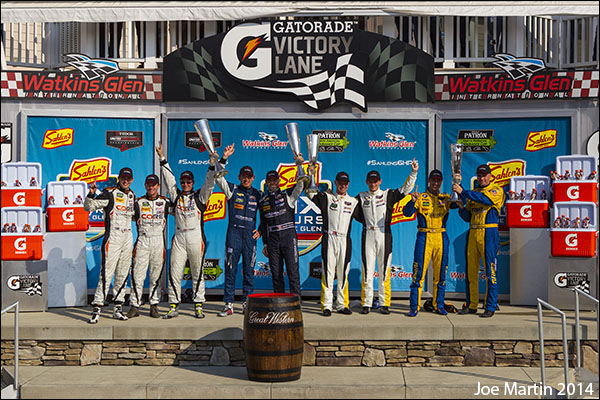 “I have to say, I am so pleased with how things have gone for the team this year, with the #3 car especially,” said Magnussen, who picked up his 40th win in North American professional sports car racing. “We’re developing a new car and we keep finding new things to do with it. I just saw that all the fastest race laps for all the GTLMs were all within three tenths (of a second). It is a very competitive category. You have to be on your best game for everything you do. There is no room for any mistakes.” 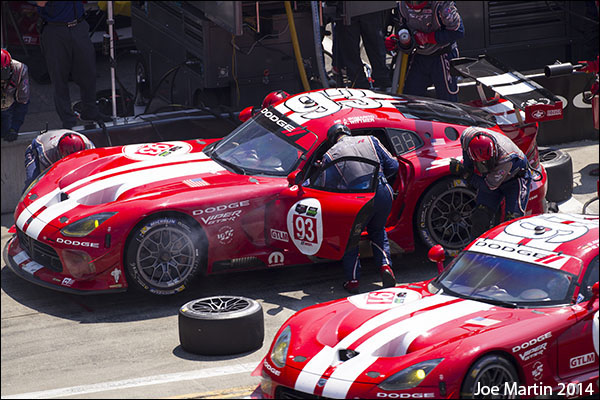 “It was up and down, up and down. We were a little bit unlucky at the end with the cautions,” said Dominik Farnbacher. “It allowed the leader to make it on fuel. It was really, really tight at the end. It was a little bit overwhelming. Marc (Goossens) did two double stints in the car, which was really tough on him. He did a great job. I’m really proud of my team – the mechanics, Bill (Riley) and all the guys for having an awesome strategy.”

The GTLM polesitter though had a race to forget, a 10th place class finish for the #55 BMW Z4 GTE of Andy Priaulx and Bill Auberlen all that could be savaged after multiple punctures and a stop and 75 second hold penalty for avoidable contact before half distance.

Dane Cameron and Markus Palttala drove to a dominant GTD victory. The duo led all but nine laps in Turner Motorsport’s #94 BMW Z4 for their second GT Daytona (GTD) class victory of the season.

The team also led at the halfway mark to score the maximum 10 points in their Round 3 win in the Tequila Patrón North American Endurance Cup.

A late caution and final lap restart allowed Townsend Bell to close the deficit in the runner-up #555 REVO/Robert Graham/Royal Purple/Motegi Ferrari 458 Italia, but there wasn’t enough time to catch Cameron who went on to win by 2.087 seconds.

“It was picture perfect today,” said Palttala, who started the car and quickly moved to the front. “I took the lead in the first corner of the very first lap and never gave it away. Everything went according to plan.”

“It’s pretty special to get the first win for both of us here at Watkins Glen,” added Cameron, picking up his fourth win in North American professional sports car competition. “I checked the [Sahlen’s] Six Hour box and one of the marquee events for us here in the TUDOR Championship. Literally, it could not have gone any better than it did today. The cars were excellent, the team was excellent. Perfect.”

With its second-place finish, the #555 AIM Autosport team, as well as Bell and co-driver Bill Sweedler unofficially extended their lead in the Patrón Endurance Cup to 14 points over the #44 Magnus Racing team (37-23). With wins in both segments Sunday Turner Motorsport now has 21 points despite not scoring any in the Rolex 24 At Daytona.

Bell and Sweedler also extended their lead in the TUDOR Championship season-long standings. Despite finishes of 14th at Mazda Raceway and seventh at Detroit Belle Isle in the two most recent races, the two have made up significant ground in the Patrón Endurance Cup events thus far, winning at Daytona and Watkins Glen and finishing second at Sebring. 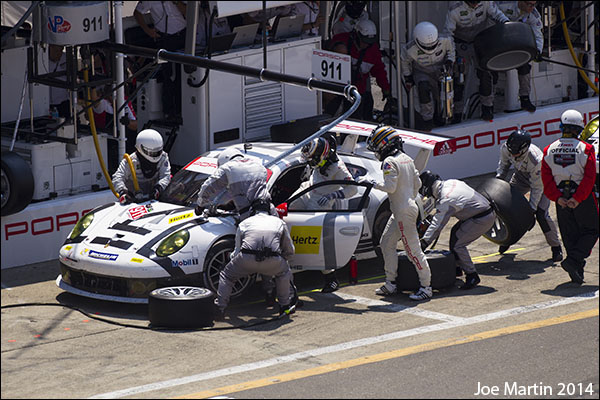 Fresh off a fifth-place in the 24 Hours of Le Mans, Dempsey Racing and drivers Patrick Dempsey and Joe Foster teamed with Andrew Davis to finish fourth in the #27 Porsche 911 GT America. Alessandro Balzan and Jeff Westphal finished fifth in the #63 Scuderia Corsa Ferrari 458 Italia, this despite a mid-race clash that saw the Ferrari spin out after contact with a GTD Porsche.