The fourth round of the 2014 FFSA GT Tour saw the teams and drivers compete at the circuit du Val de Vienne in central France for two more hour long races. Sofrev ASP and Saintéloc Racing took wins in close-thrilling contests.

The first race of the weekend saw Philippe Giauque and Morgan Moullin Traffort take victory in the #1 Sofrev ASP Ferrari 458, leading a dominant run by Ferrari teams. In the end, the top four in the race being taken up by 458s.

Raymond Narac led the field away from the grid in the #76 IMSA Performance Porsche from pole position, ahead of #4 Sport Garage Ferrari and #42 Saintéloc Audi with Gilles Vannelet and David Hallyday at the wheel respectivley.

Narac didn’t have the speed to pull away from the pack, and found himself under constant pressure from Vannelet who, on the 17th lap, managed to squeeze by. At almost the same time, Henry Hassid in the #51 Sébastian Loeb Racing R8 took third off of Hallyday. 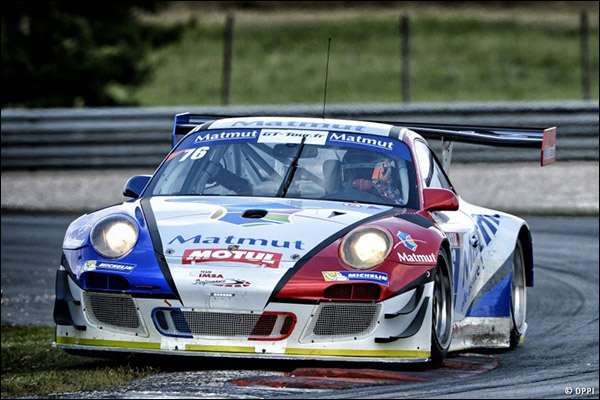 The pit stop cycle at the halfway mark saw a huge shift in the running order. The Sofrev Ferrari – then with Giaque at the wheel – managed to hold first, but behind him, the other Ferrari teams gained significant ground.

There was a lot of squabbling between the top three drivers as the race came to a close. Ayari tried to take the lead, but instead was passed by Santamato. Moullin Traffort remained under pressure, but kept his cool as order was restored in the final few laps with Ayari retaking second spot.

Moullin Traffort crossed the line just six tenths ahead of Ayari, making him and Philippe Giaque the first pair to win two races this season.

“I must say I am very lucky to ride with Morgan (Moullin-Traffort),” said Giaque after the race. “He still drives incredibly well and made all the moves for us to take the win. Congratulations to him for his work and for fending off Soheil (Ayari) brilliantly.”

Team Duqueine’s other Ferrari – the #350 took a comfortable win in the Coupe De France Category. 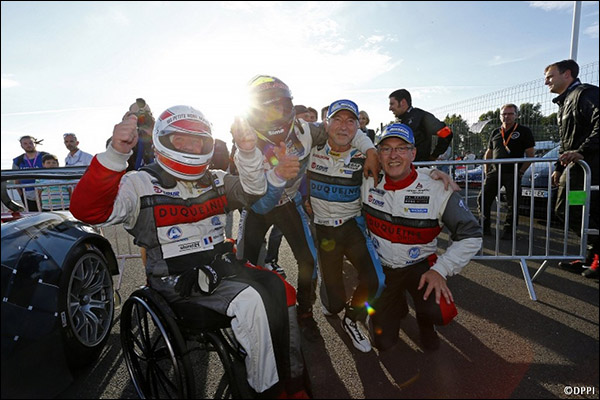 The second race of the weekend also saw the top two runners separated by just six tenths at the end, and provided the crowd with some thrilling action in the rain as David Hallyday and Grégory Guilvert took the win for Saintéloc Racing in the #42 Audi R8. 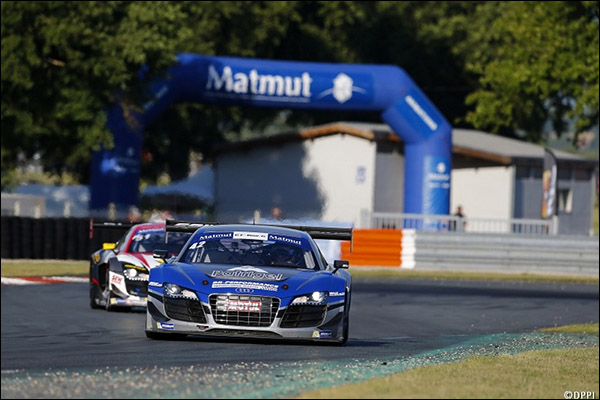 The race’s opening laps saw a great tussle between Raymond Narac, who once again had pole position, and race one winner Morgan Moullin Traffort. Narac eventually had to concede his position at the front after 10 minutes of racing. 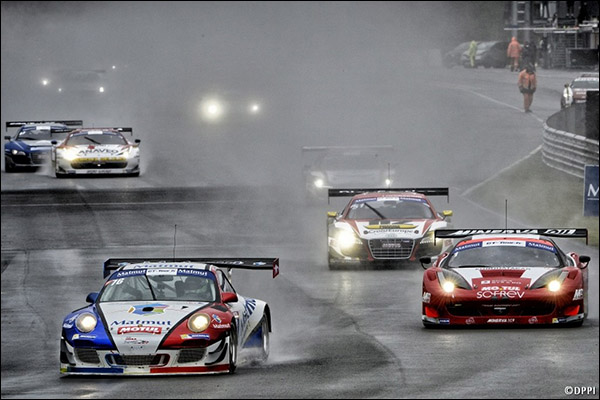 It was the same story as race 1 for the IMSA team, as their Porsche slowly tumbled down the order throughout, and eventually finished 7th after Nicolas Armindo was handed a penalty after the pit stops for avoidable contact.

Moullin Traffort was the last of the frontrunners to pit, but it unfortunately didn’t work in the team’s favour as the hard-charging Saintéloc Audi moved up the pack to second and would take the lead off the Sofrev ASP Ferrari on the final lap, just a few corners from the end. David Hallyday pulling off a masterful move to slip past the 458 in the tricky conditions, Moullin Traffort struggling to find any grip.

“Greg (Guilvert) had such a great stint that he put a lot of pressure on me. I had to do well! I spent my early lapps analysing the track in the rain. Gradually, I moved through the field and managed to take the win, I’m so happy for everyone, it was great fun,” Hallyday said after the race.

Another mover after the stops was the #10 Sofrev Ferrari of Eric Debard and Olivier Panis, who gradually climbed up the order throughout, and finished third overall, scoring a well earned podium spot after just missing out in race one.

The #350 Team Duqueine Ferrari made it two for two in the Coupe De France class. Phillippe Colancon and Team Owner Gilles Duqueine finishing just ahead of the Classic and Modern Racing BMW Z4.

Next up for the French GT field is a trip to Magny Cours on the 6th and 7th of September, to race on the former Franch Grand Prix course after a month off for the summer.