Beaumesnil introduced a presentation outlining the main points of the new class which will form the basis for the platform of the ACO’s ‘pyramid structure’ well in to the next decade. The class will be an open one with the ACO speaking closely with six constructors at present.

The significant points from a technical perspective were outlined as follows:

The ACO also unveiled an artist’s impression of the LMP3 penned by their agency (see below). 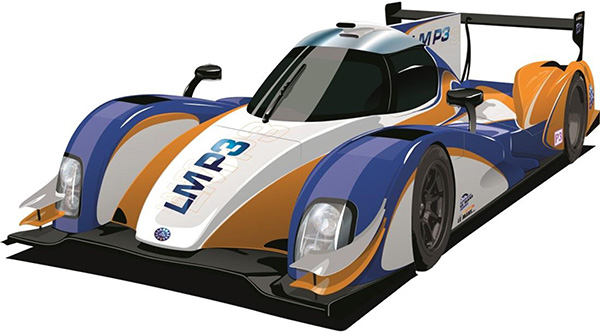 The weight of the LMP3 is set to be between 870-900kgs. Intentionally heavy, the new initiative is aimed to ensure less maintenance and a stronger car that can be run by just four personnel per weekend. Neveu went on to confirm that the ACO will look at ways to organise and control the re-fuelling management of the cars.

The LMP3 cars will be run on just one set of gear ratios during the season and have mandatory power steering. The engine (V8 normally aspirated) and gearbox package will be sold to teams by ORECA and the power target for them is set to be around the 420bhp mark. Beaumesnil is confident that the cars will not need any significant maintenance until they have achieved 10,000kms of running.

A spec tyre will be utilised for LMP3 and the ACO is currently in discussions with suppliers. The size of the tyres will be similar to those used in the Porsche Cup. The LMP3 will be fully homologated by the ACO. The regulations are imminent and expected to be completed within the next week. The identity of the actual powerplant is also scheduled to be revealed then.

Gerard Neveu told DSC this morning: “This is a comprehensive plan to ensure we have a solid structure for our races from 2015 onward. The LMP3 class will be a great opportunity for young and gentlemen drivers to break in to top International endurance racing. We are hoping to see the first car running in early 2015 and we have lots of interested parties who want to build cars and also many who want to run them. Yes, some are here in the paddock this weekend.”

Pierre Fillon, President of the Automobile Club de l’Ouest: “From the base to the summit we want to make it easy for drivers, teams and constructors to enter for endurance. For drivers we’re promoting a specific training course starting with endurance races for karts – with the Le Mans 24 Hours for Karts – up to the Le Mans 24 Hours for cars. Quite a few of the most recent winners of the event cut their teeth on the Le Mans circuits. For the teams what was lacking was a quick, safe low-cost car to help them learn the sport and move up the steps of the ladder one by one. This LM P3 is the base of our pyramid devoted to the different LMPs.”

Vincent Beaumesnil, Automobile Club de l’Ouest, Sports Manager: “We decided to create the LM P3 to continue the endurance ladder. This brand new prototype, which bears a familiar resemblance to the different LM Ps, will be very competitive, reliable and safe and will be sold at reasonable prices with low running costs. We reckon that the yearly budget for a season in the ELMS will be only about twenty per cent higher than a closed CN with a much better positioned product profile. We’ve thought everything through so that the restrictions for drivers and teams should be reduced to the minimum. The sporting regulations governing the LM P3s in the series they will be racing in will also be adapted to economic constraints without, however, infringing on the performance, the safety and the quality of the on-track spectacle.”

Mark Thomas, Asian Le Mans Series, Managing Director: “For the Asian Le Mans Series the launch of the LM P3 is an extremely positive step forward for the development of Le Mans prototype racing in Asia. As a developing region there is an obvious demand for an entry level and more economic prototype that can enable teams and drivers to the take the first step into endurance racing. We have already started in this direction in the 2014 Asian LMS with the addition of CN Prototypes into our grid. However, the LM P3 will provide the long term solution for us to introduce a proper ACO homologated car into the Series and we are convinced this is a platform that will be well received in Asia. We now believe we have the portfolio of cars that can both compliment the emerging Asian LMS and support the global Le Mans pyramid that will enable endurance motorsport to grow in the region.”