Pre-season talk and excitement of major leaps forward for the Asian Le Mans Series were all but blown out the window with the confirmation of the entry list for the 1st round at Inje. A worryingly tiny grid of 8 cars were due to contest the 1st round in Korea.

As someone who has also been reporting on the full grids and excellent racing of GT Asia and Super GT so far this year one thing is for certain, it isn’t the continent’s lack of interest in GT racing that has caused such a disappointing turn out.

8 cars was certainly a tough package to sell to any fan but apparent optimism from the organisers came in the form of pointing out that there should be competition in all three classes. Even this turned out not to be the case come qualifying as it was announced that the ATL Wolf Asia car had been withdrawn. This left Craft-Bamboo the only competitors in the brand new CN class in their Ligier JS 53 EVO.

So qualifying began with the field down to 7. In LMP2 the 2 entrants fought hard for pole with defending champions OAK ending up on top in the #1 Morgan-Judd pedalled by Ho-Pin Tung. Eurasia Motorsport’s Oreca Nissan came close though with a best lap by Richard Bradley leaving them just under 2 tenths off the OAK car.

The only interest that came from the CN class was the Craft-Bamboo Ligier’s time compared to the LMP2s. The Morgan-Judd had managed to circulate in 1:23.889 and the CN Ligier posted a 1:27.799. These times at least giving us some indication of what to expect in terms of difference in pace between the two classes.

In GT there were four cars entered. But to add insult to injury the #7 Team PYTHON Ferrari crashed early in qualifying and word from the team was that the car looked unlikely to make the race (in fact the car, brand new and delivered to the team on the Tuesday, was written off). Then there were 6. That left the fight for GT pole to the three cars all entered by the same team, Team AAI. AAI had turned up with one Mercedes SLS and 2 BMW Z4s. The #90 SLS took GT pole from the #91 BMW and finally the #92 BMW. All three were within half a second.

As race day came the 6 cars lined up in front of the reported 5,000 strong crowd. Right from the off Richard Bradley was on the money and took the lead on the opening lap. Bradley pulled out a very strong 58 second lead by the time he handed the car over. However Tacksung Kim was not able to match the pace of his co-driver and David Cheng set about chasing him down and eventually passed Kim on lap 60 to take the lead. It was to be a lead he kept until the finish with the Eurasia car eventually retiring. 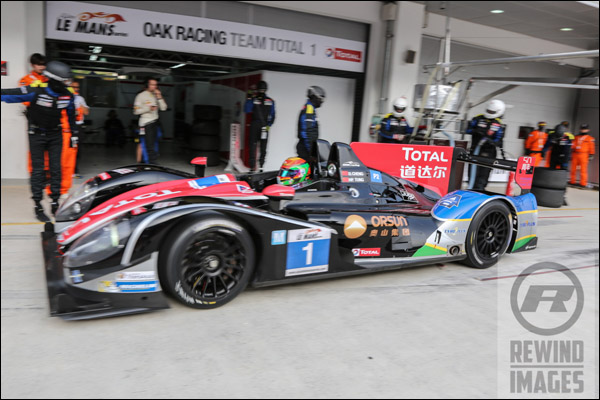 In CN the Ligier struggled. First it was overtaken early on by the GT field and then spent much of the 3 hours in and out of the pits but managed to get to the finish line even if it was 32 laps behind the winning LMP2 car.

GT was a lot closer. The #92 BMW took the GT lead early on but after some swift laps the #90 Mercedes took back the lead and kept it for much of the race. That was until a final charge from Marco Seefried in the #92 BMW saw him catch and pass the Mercedes, eventually winning the class by just 7 seconds.

It is difficult to sum up the opening round of the Asian Le Mans Series and seem constructive. The initial grid was poor in terms of numbers and shrank throughout the weekend leaving us with essentially only 4 competitive finishers. Talk of more cars for future rounds is all well and good but there were less in Inje than there were last year and that is likely to be the case in Fuji too.

Central to the worries of anyone hoping the Asian Le Mans series will succeed are the worrying comments and rule changes in response to the first round.

First came the announcement that 5,000 fans watched the opening round at the circuit. If there were, and our sport has a not too enviable reputation for exaggeration in this area, what must they think of sportscar racing after watching 6 cars circulate for 3 hours with only one meaningful battle.

Also worrying is the apparent denial of how unacceptable such a small grid was. The official press release for the race stated “With a fantastic grid of teams and cars the spirit of Le Mans racing, combined with rising Korean motorsports passion, was everywhere throughout the event, and clearly enjoyed by the 5000 spectators that attended the event. As the first race in the 2014 Asian Le Mans Series the 3 hours of Inje showed a huge potential in Le Mans racing in Korea.”

Now it is one thing to see the glass as half full but describing a 6 car grid as “fantastic” and claiming “huge potential” when the grid is smaller than last year’s race is just insulting.

One step that has been taken to try and salvage something from this frankly unacceptable start to the season is a change to the rules. Each team that enters will put forward their best 4 results from the 5 race calendar. Also, so long as a team enters the remaining 4 races of the season they will be eligible for the prize of a Le Mans entry. Essentially this new ruling all but nullifies the Inje race.

So with the next race at the historic Fuji Speedway things need to improve but frankly with a scheduling clash with Japan’s hugely popular SUPER GT championship’s race at Suzuka it could be a real challenge to generate further interest, whether that be from fans or teams. Here’s hoping.

The report above is an unconventional DSC race report, but it’s difficult to disagree with James.

The Championship organisers have fielded explanations about the logistical difficulties with Inje, and that this has contributed to the poor grid size – That leaves the question – Why go there? and, in particular, why launch your season there?

We are aware of some late withdrawals from the list but the reality is that the ultimate total fell well short of the prospective grid touted even as late as Le Mans this year by principal players around the Series.

DSC remains supportive of the drive for an Asian presence for ACO rules racing but the abject denial of issues in the public facing communications from the Series raises hackles and questions.

Certainly we are mightily relieved that we did not commit to our scarce race budgets by travelling to South Korea for this one!