Road America seems to be a favourite for every driver in North America, not only because of where it’s set in scenic Wisconsin, but because of the nature and layout of the track itself. It’s longish (just over 4 miles), it’s got a great mix of medium and fast corners, and some really challenging corners which make you feel properly satisfied when you get them right! 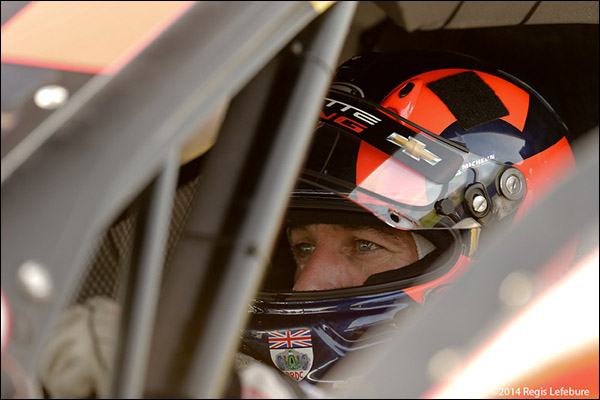 Since the latest Balance of Performance issued just before Indy we seem to have been a bit on the back foot compared to the rest of the GTLM class in the United Sportscar Championship, but our goal is the same as always, to score the maximum number of points for both the manufacturer and drivers’ championships. At Road America Tommy and I finished 7th just behind our Corvette Racing team mates which was enough to keep us in 6th place in the Drivers’ table, and just a few points away from 4th. Jan and Antonio’s points kept us at the head of the Manufacturers’ points standings which, at this stage of the season, is the main focus.

It was my turn to qualify and we managed 6th – struggling a bit because of the harder Continental Tire rubber which had been laid down on the track in the 2.5 hour race which ran just before our qualifying sessions. That made the track much more slippery than in practice but it was another fairly tight session (after the top four who were streaks ahead) and we started ahead of our sister car for the first time since Sebring which was a nice reward for the guys on the No.4 car for all the hard work they’ve put in over recent races. We seem to have now got on top of the balance issue we’ve been chasing over the last couple of months, but roll on 2015! 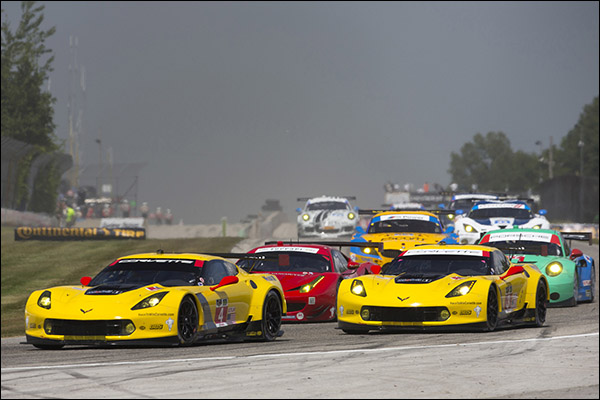 It was a pretty brutal race, punctuated by no fewer than six full course caution periods which has to be a record for one of our races here at Road America. Both Tommy – who took the start – and Antonio were jostled around on the opening laps and the team made a call to come in early for two tyres and a top up of fuel which was a good one. Both the doors plus the rear and front bumpers all had contact and Tommy said that, in some places, he was trying to make room for himself around people who didn’t want to give any room. That’s how the racing is in the TUSC, especially when trying to get around some of the PC cars.

Unfortunately our good strategy call was undone when we picked up a stop and go plus 60 second penalty for exiting the pit lane when the red light was still on. Our pits were very near pit out and, to be honest, it was the length of the queue behind the safety car which caught us out. You don’t expect to come in to the pits, refuel and change tyres, and still find the pack passing on the pit straight (which is why the red light was on) because of the size of the field. We must have gone out only one second before the light changed as the Risi Ferrari and our #3 car were just behind us and they were okay. 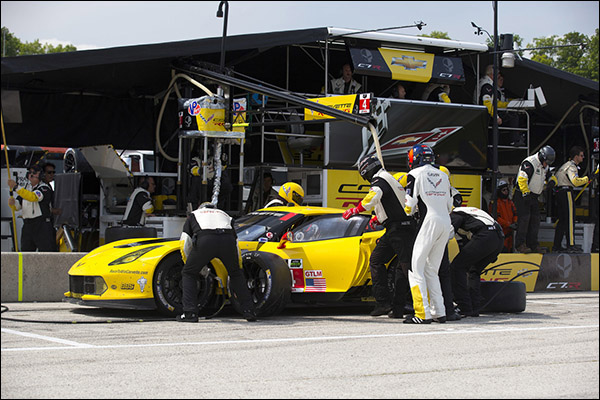 My stint started well and I was able to run pretty good lap times and stay with the cars directly in front of me, with the team doing a fantastic job getting us up to fifth. I was running behind one of the Porsches and he was blocking me into T5 so I couldn’t get a good run out of that turn into the next. I tried to defend into T6 but Mark Goossens tapped me once to open the door and then used me as a brake to get through – losing me two places.

I went to see the Race Director afterwards and had a bit of a contre-temps with him as this is exactly the same sort of move that we got penalised so heavily for at Watkins Glen; the Viper got away with nothing which seems somewhat inconsistent. We looked at the video footage together, but I was told they decided it was a “rough racing incident”.

After that we were always playing catch up and 6th and 7th were the best we could hope for with everyone finishing the race and with so many safety cars. We don’t now have enough pace to make good headway against our competitors and some of them have us covered in every department as they have so much power. As it is at the moment, we can only luck onto the podium but we’re looking forward to VIR which is the scene of a great win for me and Tommy in 2012 and my 100th ALMS race. Our race will be just GTLM and GTD so we’ll be fighting for an overall victory…let’s hope there are fewer safety cars and more on track battles!