With huge apologies to our readers and to Gabriele Tosi, here is his much delayed race report from Round 3 of the Italian GT Championship which took place at Mugello in July. The next round takes place at Paul Ricard this weekend, and we promise to bring you that report in a much more timely manner.

The usual scorching sun was absent from the start of the first race of the third round of the Italian GT Championship at the marvellous track of Mugello, deep into the Tuscany hills, and was replaced by a typically ‘British’ sky, with seemingly a strong chance of a heavy shower before the end of the race, adding more variables to the mix. 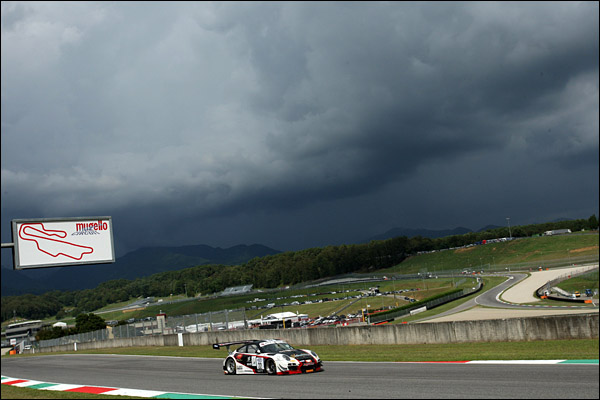 The already difficult race for the Porsche guys would be even harder due to the time penalties needing to be served during the driver changes, with Beretta-Carboni having 20 seconds and Donativi-Gagliardini having 15.

The start was a much cleaner one than had been the case so far this season, with Amici going pedal to the metal – the top speed advantage of his black Lambo taking him through the first long right-hand corner in P1. 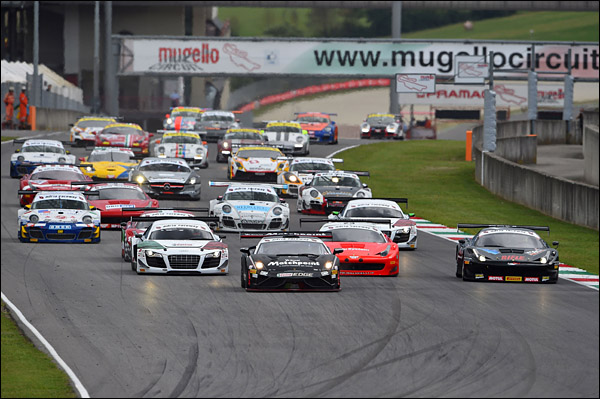 Ferrara was second, overtaking Schoeffler (who lost the spot also to Frassineti), while fifth was Giammaria, followed by Carboni, Capello, Lancieri, Donativi, Lucchini and Mora in the first of the big V8s. The first lap ended with no major contact between the 25 cars on track.

Soon the field divided into three parts, with Amici, Ferrara and Frassineti pulling away from Schoeffler by a second per lap; the young German being pressed hard by Giammaria, Carboni and Capello. 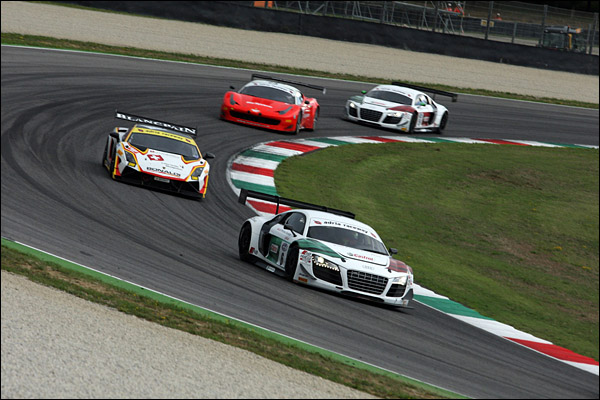 The third part of the “long snake” was headed by Lancieri.

On Lap 3, Giammaria made a very good outside move into Turn 1 and took fourth from Schoeffler. Thereafter, he began to close up on the top three.

The good pace in qualifying for the Audi proved to be a much slower one in the race with Schoeffler clearly struggling even to hang on to fifth, and having the slowest top speed of the field obviously wasn’t helping the German-made V10.

The TV pictures captured a Ferrari stuck in the saddle of the fast Esses after the two faster curve of the track, and it turned out to be the Lucchini 458 after contact with the Mercedes SLS of Mora – race over for the Italian Ferrari. At the same time Carboni flew by the struggling Schoeffler Audi along the main straight, and Capello followed through soon afterwards.

Giammaria finally caught the top three and outbraked Frassineti for third place, while upfront Amici had been caught too by Ferrara and overtaken by the black Ferrari. 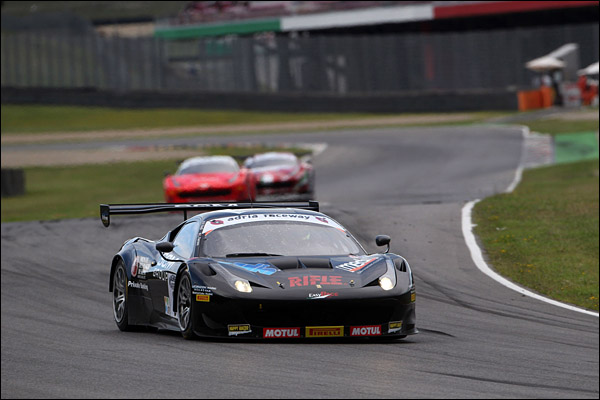 The pit window was by now open and the slower starting drivers had begun handing over their duties to the faster ones.

Before the pit window closed again, bad luck struck the Lamborghini – flapping undertray becoming the cause of yet another retirement for the undisputed fastest car on track, with Amici’s teammate Barri managing only two laps. It was now a 1-2-3 for Ferrari at the head of the field, but would it stay that way?

The predicted heavy shower didn’t materialise and the race would stay dry to the end. Magli-(Ferrara) was leading from Casè-(Giammaria) and Necchi-(Frassineti), then came the two Audis of Mapelli-(Schoeffler) and Zonzini-(Capello). Sixth was Benucci-(Lancieri), followed by the three hard-charging Porsches of Gagliardini-(Donativi), Beretta-(Carboni) and Renauer-(Bordeaux). Meanwhile, the Mercedes of Sa Silva decided first to have a trip into the sand, and later a big off ending a bad weekend so far for the Stuttgart marque.

Magli still led, but Casè was now much closer to him, Necchi had fallen away, while Benucci had lost more than 30 seconds in a bunch of laps with the three faster Porsches all able to catch and overtake the Ferrari.

Mapelli and Zonzini found some “boost” on their Audis and both easily overtook Necchi, but Zonzini’s R8 suffered a big spin after developing a brake issue and his great recovery race came to an end.

The final five minutes saw Magli closing every gap to keep the first place. Casè was close, and now Mapelli was joining the party…and the final lap began with Casè finally able to pass Magli – but only for a corner as the black Ferrari bounced back. At the next corner, though, Casè finally again overtook Magli and stayed there to the flag.

However, the timing screens were showing Mapelli as the winner, with Casè second and Magli third – the two Ferraris having been penalised for too-short pitstops. So after the chequered flag it was a surprise Audi victory on Ferrari soil, but a strong 2-3 for the 458s. 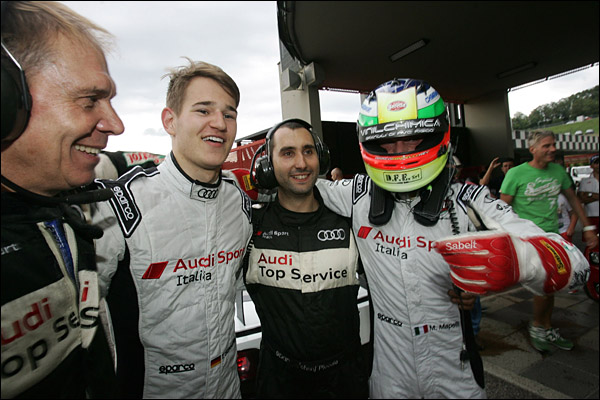 Necchi finished fourth, after being able to contain the pursuing Porsches, with Beretta fifth for Autorlando and Gagliardini sixth for EbiMotors. Seventh was Renauer in another Porsche, then Benucci and the almost forgotten Corvette of D’Amico. Rounding out the top ten was the second Autorlando Porsche of Romani.

The Cup class delivered another classic battle, particularly amongst the Pros. In the end it was a 1-2 for the Lamborghinis, but both Iacone and Zanardini – the pro drivers – had their hands full of the Porsche of Baccani-Venerosi, who finish third from Quinzio-Schiattarella and Bodega-Maestri. 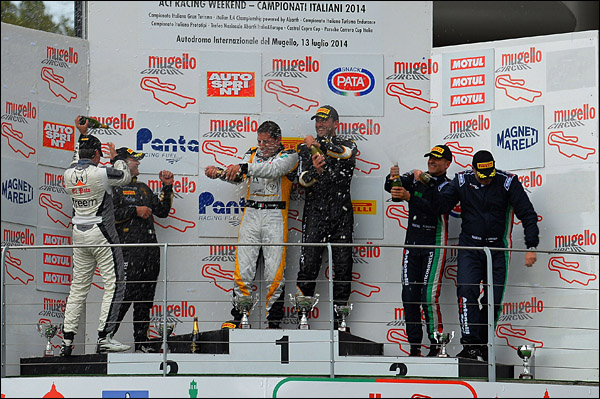 All 25 cars would take the green flag for Race 2 on Sunday, with the time penalties this time affecting the winners from Saturday – Mapelli-Schoeffler with 15 seconds, 10 for Casè-Giammaria and 5 each for Carboni-Beretta and Ferrara-Magli.

As it turned out, there would be only one driver in the #8 Easy Race Ferrari which finished third in Race 1, as Marco Magli fell ill overnight, leaving Luigi Ferrara to race solo for the second race. This would mean a one-minute time penalty would be applied to the car’s results, which would be difficult even for a quick Pro like Ferrara to overcome. 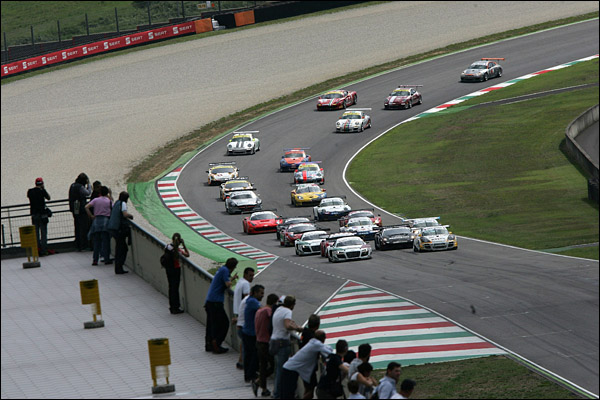 The start was almost a perfect one, maybe the best in all the eleven years of the series. With an almost five-wide entry into the first corner, some trouble was expected; but amazingly everyone stayed on track, with Mapelli able to keep the lead, despite a hard charge by Renauer Pier Guidi was third, while Ferrara lost some places in the first Esses to Zonzini, Casè and Barri. The two Porsches of Gagliardini and Beretta were next, followed by the slower gentlemen-driven Ferraris of Necchi and Benucci.

As had been the case in Saturday’s race, the field soon divided into three groups – the first four managing to escape about half a second faster per lap from the following six, where the man on the move was Ferrara. Then came the “second division” with the Mercedes, the Corvette and the slower Ferrari.

Nothing changed at the front, with Mapelli still leading from Renauer, Pier Guidi, Zonzini and Casè, while Ferrara finally outbraked Barri for sixth place. Just two laps later, the young gun caught and passed Casè for another improvement.

The black weekend of the black beauty went from black to pitch black, with Barri retiring the Lamborghini once again after more undertray problems. Can these guys get a break at all?

The standings, as predicted, were turned quite upside down after the driver changes, with Lucchini-(Pier Guidi) leading the race with a healthy margin on Bordeaux-(Renauer), Schoeffler-(Mapelli), Ferrara, Donativi-(Gagliardini), Carboni-(Beretta) and Giammaria-(Casè). Dindo Capello’s race in the #5 Audi was already over following contact with a Cup class Porsche, which appeared not to see the faster car approaching and closed the door.

In the battle for the podium places, Ferrara attacked and passed Schoeffler and Bordeaux some moments later. Could he now reach Lucchini and drive away for some distance? Just behind, Giammaria caught up to the two Porsches of Carboni and Donativi, and both were unable to contain the red Ferrari.

The final minutes were quite a show, with Ferrara clocking laps two-to-three seconds faster than Lucchini, and an apparently safe margin of almost 20 seconds for the #77 Ferrari soon become zero when the black #8 458 smoked past the red one along the main straight. 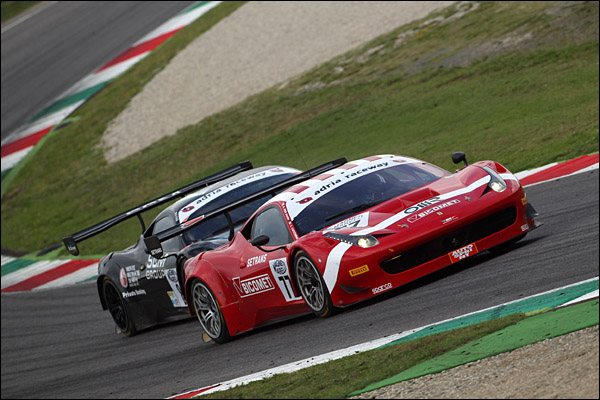 This may only have been for pride, but with the big gaps in the lower positions behind Ferrara he could yet score a decent result despite the 60-second penalty.

Apparently unseen by the TV cameras until the final two laps, Giammaria quickly closed the gap to Schoeffler and Renauer and, not satisfied with this, attacked and paseds both cars on the last lap. An impressive recovery.

In the end Ferrara crossed the line first but was classified only ninth when the penalty was applied, so the real winner was Lucchini. Second was Giammaria, with a recovery race reminiscent of Mad Max Papis in the good old IMSA days, for a Ferrari 1-2. Third was René Bordeaux in the Herbert Moto Porsche. 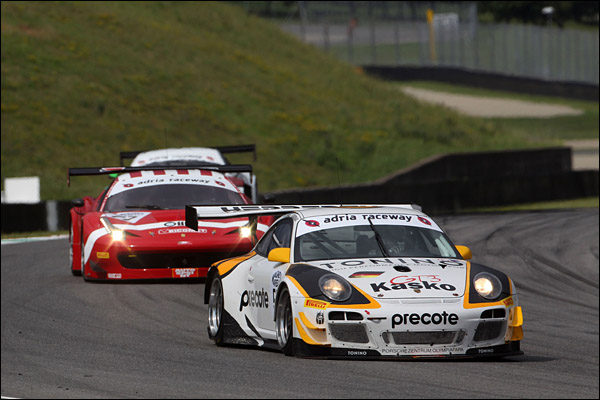 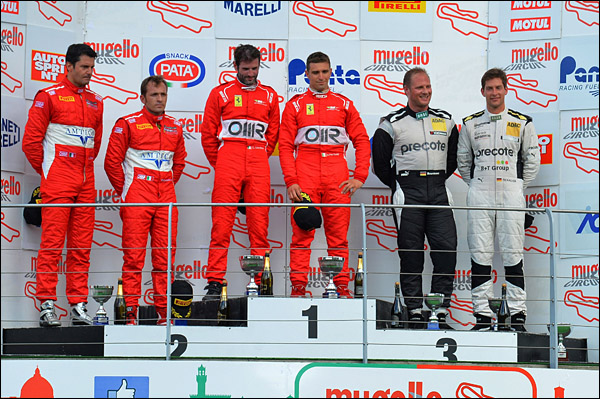 The Cup class was no less entertaining than the big boys, with the Pro drivers Rangoni and Schiattarella in their Porsches battling in the first part of the race with Zanardini in the Gallardo. 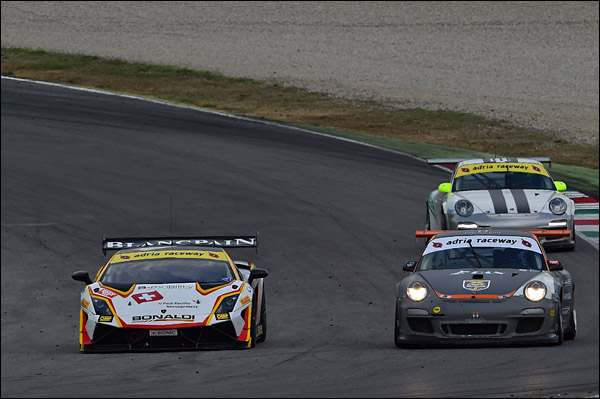 With no time penalty to serve, Luca Rangoni won the class with Massimo Galbiati by his side, but the two Gallardos finished on the podium this time with Zanardini-“El Pato” second and Iacone-Tempesta third. No luck this time the for lone 458 of Mancinelli-Goldstein, which finished sixth in class.

The weekend was full of dramas but with two very good and clean races. The surprise winner in Race 1 couldn’t match the Ferrari’s pace on Sunday, but still the Italian marque would have hoped for a better score on its home track. Audi said farewell to Mugello with good and bad results, while the poor guys of Imperiale Racing wanted only to pack their luggage and get away as fast as possible from a very nasty weekend that promised so much, but which in the end was a completely disaster. Porsche, already aware that Mugello was the worst possible track of the calendar, scored some reasonable results, but maybe they should have done better than a pair of fifth places? But every points count, especially in a title race like this year’s.

Mapelli-Schoeffler are the new leader with 59 points, Giammaria-Casè has 50 – one better than Donativi-Gagliardini – while Beretta-Carboni has 46…but the next eight drivers are within a victory away from the top, so it’s anybody leading this time.