Our most recent round of the Tudor United Sportscar Championship was another tough weekend which looked as though it was going to end up much better than it did, not just for me and Tommy in our #4 entry but for the whole team. To be honest, at the end of the weekend everyone was just pleased it was over and that Antonio had not lost too many points to the Vipers in the championship battle.

The low point of the whole weekend was Jan’s crash in practice which put a big dampener on everything. When you look at it again, it couldn’t have been more of a freak thing really – how and where it happened. Richard Lietz in the #911 Porsche went off track on some fluid dropped by another car and came to rest against the tyre barriers and then Jan went off on the same fluid and slid helplessly right into the Porsche’s door. Both cars were badly damaged, but worse was that Richard suffered a broken arm and Jan was briefly knocked out and got a concussion…we don’t even want to think about how much worse it would have been if the angles of impact had been different. 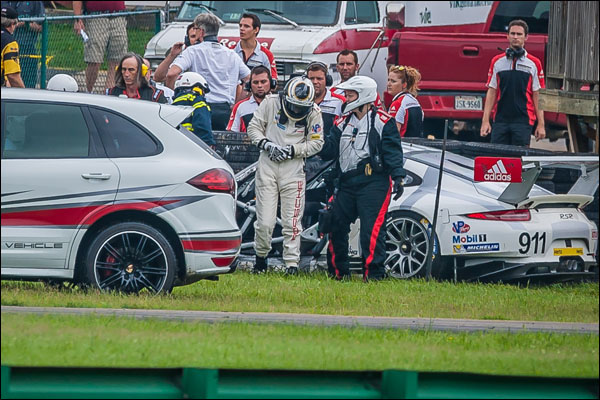 Even though the Prototypes weren’t at this race, we were lucky to have Jordan Taylor available to step in for Jan as he’d been racing in the Continental Tire Sportscar Challenge. He did a great job in difficult circumstances – talk about being thrown in at the deep end – and he joins with the rest of us in sending best wishes to Richard for a speedy recovery. 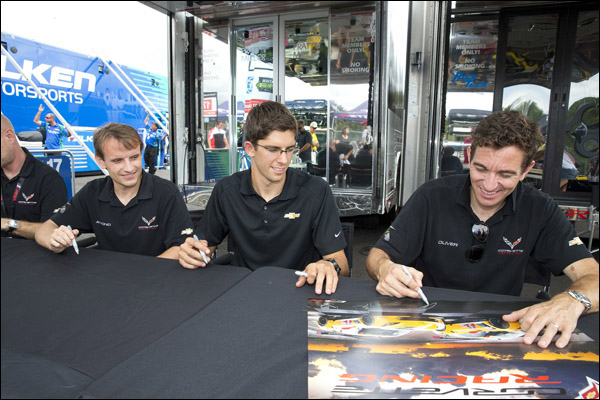 The race should have been a good one for us because we’d had success there in the past and it was a GTLM/GTD only event so we were fighting for an overall win which gave everyone a bit of an added incentive. Practice went pretty well but we lacked pace in qualifying as we were a bit out on set up. We were looking much stronger come warm up and the race and I managed to move from 9th at the start to 5th by the time I handed over to Tommy.

As Tommy went out of the pits, eight GTDs went by the start-finish line in a huge queue and that meant we lost a couple of places but we were still in a good position for a potential podium. Tommy was then battling with the eventual race-winning Ferrari just prior to the halfway point when he was hit hard from behind by Pat Long in the sister Porsche, pushing us into the barriers. The damage to replace left front toe link and other repairs cost us four laps, and the incident effectively took both cars out of contention. After that we just had to drive around to finish an unremarkable 9th.

There seemed to be some sort of invisible magnet between Corvette and Porsche all weekend, the Jan/Richard Lietz accident being the most visible. I had a slight contretemps with Michael Christensen – Pat’s team mate – on the first lap which ended up with us touching slightly and this was followed by Tommy’s clash.

Aside from our woes, it was a very exciting end to the race and Giancarlo Fisichella showed his F1 and Grand Prix-winning class with a last lap pass for victory. It was a good finish for the track and for the race in general and nice to see two cars battling at the front which haven’t been up there for the majority of the season. It looked like BMW was going to get the win but Risi played the strategy well and judged it just right so congratulations to them.

It was a great shame that Jan wasn’t fit to race but he fully understands that safety is paramount and that he needed to be fully well enough to get in the car. His team mates, who know him as well as anyone in the racing world, could see straight away after the accident that he had been knocked out and was not 100%. By not participating at VIR, it has put his championship chances to an end which is hard for him to accept and, now, if the #3 car wins the title it will be Antonio alone who is Drivers’ Champion. 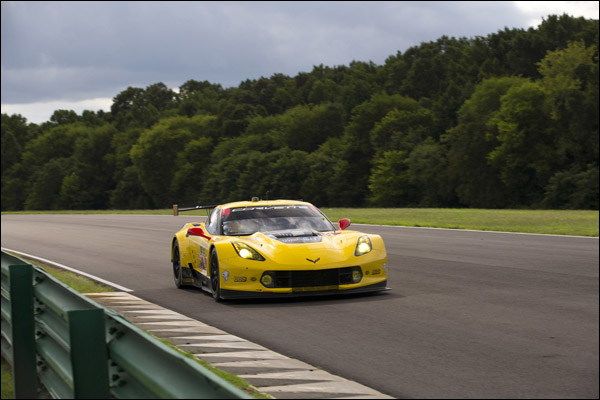 What it did prove to me was that we can’t ever take safety for granted and have to keep looking at ways of improving it. Even with today’s high specification GTLM cars from respected manufacturers such as Chevrolet, Porsche and Ferrari, this accident showed that drivers can still get hurt. For sure our Corvette crash box in the door saved Jan from further injury…maybe Richard would not have broken his arm if the Porsche had something similar and a good number of people have come to look at it since. If it can prevent any more injuries like Richard’s, then it can only be a good thing.