Alex Brundle went quickest this morning in Tudor Championship Practice 2 at a very humid Circuit of the Americas. In the car’s North American debut, the debuting Honda engined Ligier JS P2 did well to dominate its Daytona Prototype competitors on a drying track, with the #42 OAK Racing car beating its nearest rival in the #5 Action Express Racing Corvette DP by an astonishing 1.739 seconds. 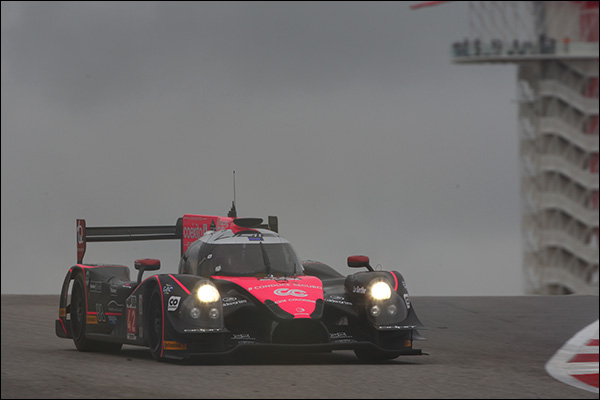 In the PC class, it was Renger van der Zande that pulled out a flier on his final lap, setting the quickest time in the #8 Starworks Motorsport ORECA FLM09 with a 2:02.770. The Dutchman beat out Practice 1’s quickest driver, Gunnar Jeannette, by a mere .113 seconds.

Porsche North America once again took the GTLM class by storm (no pun intended!) and saw the one-off #910 entry, with Frédéric Makowiecki setting a blistering 2:05.116, leading the #911 by .216 seconds. A lone Ferrari interloper in the #62 Risi Competizione F458 Italia broke up a potential Porsche lockout.

Of note, the #90 Spirit of Daytona Corvette DP suffered minor front end damage during the session, after a bodged move from a PC Oreca, but made it back out to complete the session and finish fifth in class.