The 5.5-kilometer Circuit of the Americas played host to the penultimate round of the Tudor Championship, the first of two races in the aptly-named “Lone Star Le Mans” showcase on Saturday. Fifty-two cars were met with a pleasing respite from the stormy conditions plaguing Austin, Texas for the past two days, and with Alex Brundle on pole at Ligier’s North American debut, the race transpired to be a very interesting one.

A botched start immediately put the race under caution for one lap, but a second attempt saw the power of two Daytona Prototypes usurp Gustavo Yacaman’s HPD-powered Ligier JS P2 for only a short time. Yacaman almost immediately pushed a fast-starting Ricky Taylor wide on the entry to the very steep turn 1 after being bundled about a little by a pair of DPs, later giving Taylor’s #10 Corvette DP a tire puncture. 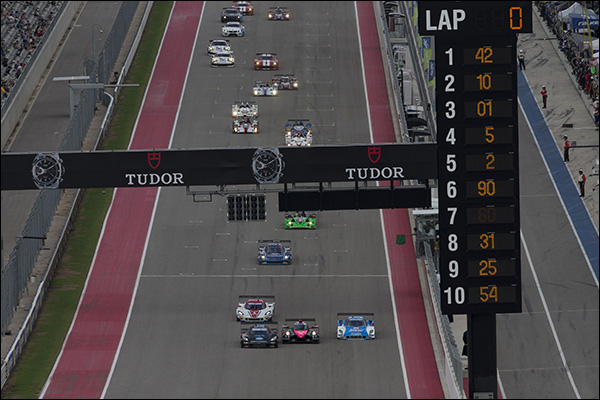 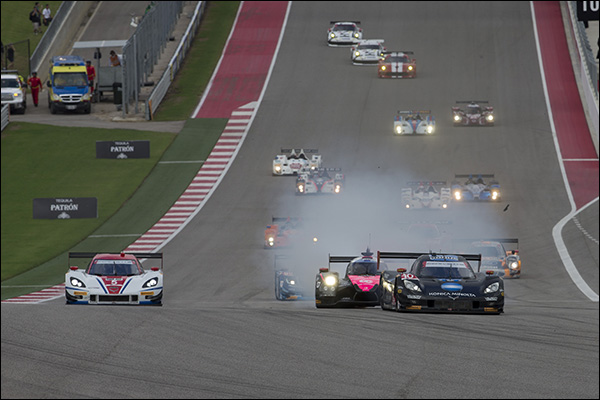 Despite the dramatic start, the first of two races in Saturday’s “Lone Star Le Mans” showcase got into a comfortable rhythm, and luckily for early leader Yacaman, no penalties were handed out for the early debacle. Michael Christensen, the rising Danish star and Tudor Championship rookie, quickly took his #912 Porsche North America 911 RSR to the front of the GTLM pack.

The Colombian would maintain a comfortable lead of over 18 seconds until his first pit stop on lap 21. His Daytona Prototype challengers would follow suit on succeeding laps with the #01 Chip Ganassi Racing Ford EcoBoost/Riley of Memo Rojas diving into the pits at the assumption of a second, longer caution. The pole-sitting GTD car, the #007 TRG-AMR Vantage of James Davison, was forced to change a cool box under the caution, dropping him down to 14th in class.

At the restart, Yacaman lead the #90 Spirit of Daytona Corvette DP of Michael Valiante and the #5 Action Express Racing Corvette DP of João Barbosa. However, the order was soon to change dramatically as Valiante promptly locked up his breaks on the entry to turn 1 and spun the leading #42 OAK Racing Ligier at the corner exit. Valiante soon after received a drive-through penalty for the incident and rejoined the race 21 seconds back in fifth place. Yacaman would be promoted to fourth after Valiante’s drive-through, spurring the resumption of the infamous “Yac Attack” that allowed handfuls of seconds to be made up every lap. 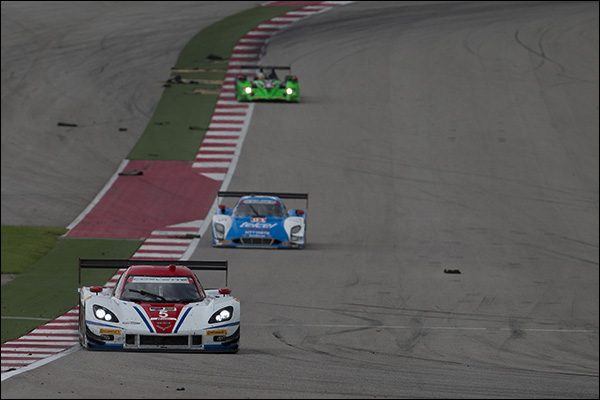 Then the rain came, as did heavy traffic. Race leader Barbosa dealt with both adversities very well and managed to balloon his lead up to over eight seconds at a time; second-placed Memo Rojas was busy defending from Gustavo Yacaman, who would pit on lap 40 and hand over the car to Alex Brundle. Meanwhile, the #54 CORE Autosport Oreca FLM09 of Colin Braun would be forced to surrender the battle for the PC lead after turning the #25 8Star Motorsports Oreca of Sean Rayhall.

The next round of pit stops transpiring just before lap 50 saw Alex Brundle gain the upper hand on Barbosa and come out in the lead of the race after all had cycled through. Additionally, the #23 Team Seattle/AJR Porsche 911 GT America, which had lead GTD for most of the race, got into trouble with the #52 PR1/Mathiasen Motorsports Oreca of Gunnar Jeannette. Ian James pitted his Porsche with water pouring out of the radiator and was dealt a penalty.

With the #300 Turner Motorsport BMW Z4 in the lead, Dane Cameron was unofficially launched into first place in the GTD standings while fiercely battling with the #33 Riley Motorsports Dodge Viper SRT of Jeroen Bleekemolen. The flying Dutchman would dive down the inside of Cameron in turn 12 and take the lead of the race with less than thirty minutes remaining. 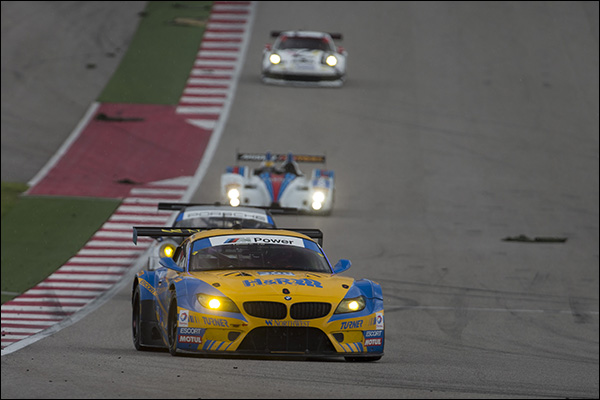 Strategy became paramount with the race approaching the two-hour mark. Alex Brundle pitted his Ligier for tires while Barbosa only came in for fuel, promoting Barbosa to second place behind Scott Pruett, who gambled on fuel. Brundle’s new tires allowed him to set fastest lap of the race, a 1:59.337, as he reeled in Barbosa.

The race would end on a very sour note for Nick Tandy. After leading the majority of the race, he pitted his #911 Porsche North America 911 RSR with a broken rear axle. This solidified a Viper 1-2 with the #93 of Jonathan Bomarito leading his teammate, the #91 of Marc Goossens. 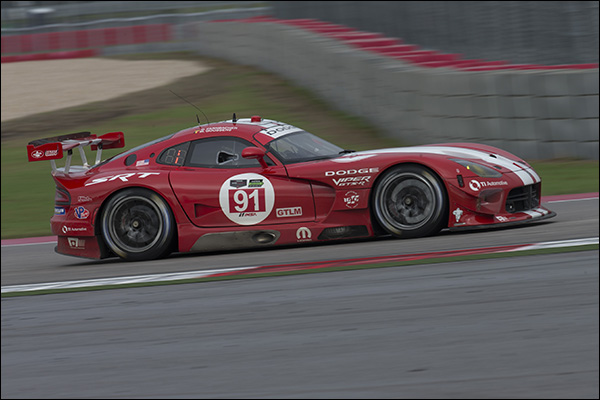 Alex Brundle managed to use traffic to his advantage with less than ten minutes remaining and sprung by Barbosa, who stumbled over the two GTLM BMW’s and lost three precious seconds. It was all up to Brundle to close the gap on the leader, and despite his best efforts, Scott Pruett’s fuel gamble paid off and resulted in exaltation for the entire Chip Ganassi Racing crew as they took their third win of the season.

The #01 Ford EcoBoost/Riley ran out of fuel on their in-lap but there seemed a very large difference indeed between the mileage that the Ligier, or indeed the Vette DP could squeeze out of a tank, or the Riley Ford, the #01 coming home having taken two stops to the other cars three.

Alex Brundle, after greeting Scott Pruett with a handshake and the words “I’ve always wanted to meet you.” told DSC of his frustration after the contact from the #90 DP, “That cost us the win no question, we still have the same frustration of struggling to get by the DPs. I lost so much time trying to get by both the #5 and the #01 despite the fact that the laptimes showed that we had the faster car. The new car has more front end but the turbo engine means we lose a little out of the slower stuff.”

Chip Ganassi, when asked how the Riley had managed to run for almost half an hour longer on fuel than either the Ligier or the #5 Action Express Corvette DP said: “Actually I told Scott that he deserved a talking to for keeping the additional 200 yards of fuel in the tank! We ran it close that’s for sure.” 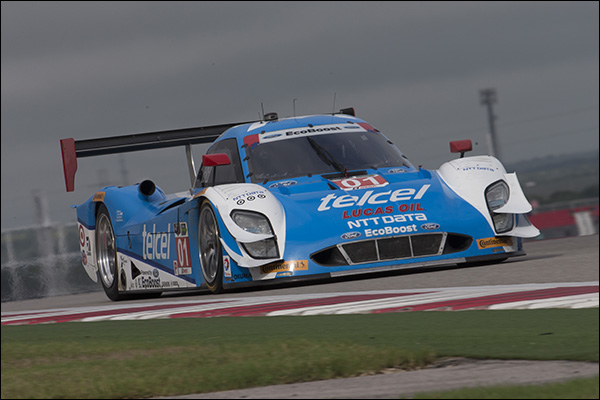 In PC, the #25 8Star Motorsports Oreca FLM09 of Sean Rayhall and Luis Diaz took the win despite an incident with Colin Braun, who finished second. The #8 Starworks Motorsport car of Mirco Schultis and Renger van der Zande took third.

The CORE Autosport crew of Braun and team owner and driver Jon Bennett has successfully wrapped up the PC class title, a testament to their four class victories accumulated over the 2014 season and three podium finishes.

“It’s quite an honour to be able to compete at this level and we’re proud of all of the hard work that happens at home and here at the track,” said Bennett. “To get rewarded with all we’ve accomplished this season makes it all worthwhile. Colin is just a remarkable talent in the racecar, and we’re so fortunate to have him help our cause.”

Porsche dominated most of the GTLM race, but the consistency of the two Dodge Viper SRT’s was good enough for an emphatic 1-2 with the #93 of Jonathan Bomarito leading the #91 of Marc Goossens to the line. The #912 Porsche North America 911 RSR with Patrick Long and Michael Christensen rounded out the podium spots in third.

“It was just keeping the nose clean, really, just being patient and not putting the car in any position that we’d get hurt and lose time in pit lane,” said co-winner Kuno Wittmer, who vaults into the lead of the GTLM championship with Jonathan Bomarito. “Once I got out of the car, I handed over to Jonathan, and you couldn’t ask for a better teammate to not put a wheel wrong.”

Jeroen Bleekemolen emerged victorious from his sterling battle with the Turner Motorsport BMW and took the win ahead of the #44 Magnus Racing Porsche 911 GT America of John Potter and Andy Lally. Dane Cameron brought his Turner Motorsport BMW Z4 home in third, which unofficially puts him in the lead of the GTD points standings. 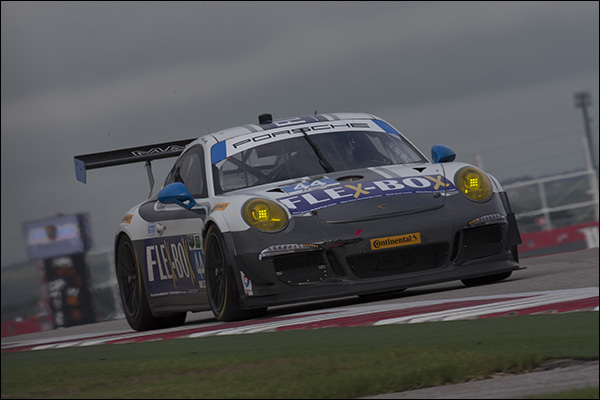 There was disappointment though for the #23 AJR Porsche, an early class leader but suffering misfortune and misadventure, Ian James losing a radiator after hitting the back of Gunnar Jeannette’s PC Oreca.

As the Tudor Championship rolls into Road Atlanta, on the outskirts of Atlanta, Georgia, in just two weeks time, there are still several championships to be decided. The final round and championship weekend will begin with Practice 1 on Thursday, October 2 at 10:10 a.m. The 10-hour Petit Le Mans race will begin on Saturday, October 4 at 11:15 a.m. and will continue into the night.