Jacques Nicolet enjoyed the preamble to the TUSCC and FIA WEC race action last week with a double pole position or his Onroak Automotive designed and build Ligier JS/P2 coupes, the Honda engined car in TUSCC with Alex Brundle (below), and the Nissan engined car with Olivier Pla for G-Drive in the WEC. 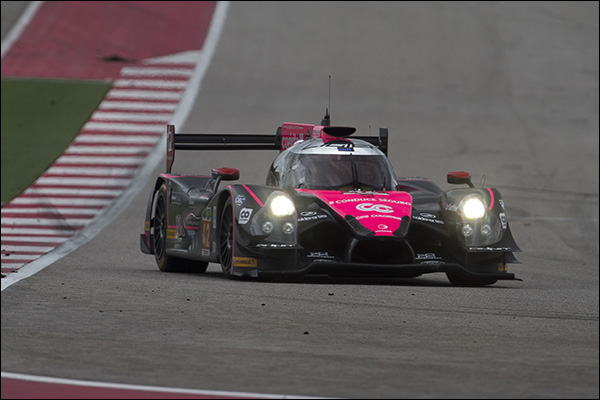 There’s still plenty to look forward to from Onroak in the coming months, though it may very well be the case that we don’t see an LMP3 chassis emerge. “The cost cap makes it very difficult to make it work commercially for us.”

Commercially at least the major attention is going to be in LMP2, three cars are currently running:

A fourth car is now set to appear for 2015 after Krohn Racing confirmed a Judd-engined Ligier for their yet to be finalised 2015 programme.

Beyond that there is plenty of further interest according to Nicolet, always straightforward in response to questions.

“The plan is to sell as many cars as we can first in North America, their 2015 calendar starts first and we can deliver certainly two or three more cars before Daytona if we receive orders by Petit Le Mans. After that we would fulfil any orders from Europe in time for the season there too.”

The plan for an all gentleman squad in a P2 car run by Oak Racing in a selective programme of races around the world is still on the agenda too.

So is the potential for an LMP1-L car for 2015, though there are still barriers to deal with.  “We are ready to push the button for the LMP1-L car, the car is ready (to be built) and we want to enter but we want to do this with a partner, a manufacturer and that is still open.

“For me I love the sport as you know but the real passion is LMP1, I think though we need to ask the ACO to make some changes, particularly in the name – LMP1-L is not a good way to describe the privateer class, it is difficult to explain to people. Just call it LMP1, that would be better.”