Along with team mates Tsugio Matsuda and Matt Howson, Richard Bradley scored a memorable and well-deserved LMP2 victory at the fourth round of  the FIA World Endurance Championship in Austin last weekend.

The Thai-based Brit and the KCMG team banished the memory of  a tough Le Mans 24 Hours, in June, to put themselves right back in the LMP2 title hunt heading in to the Fuji 6 Hours next month. 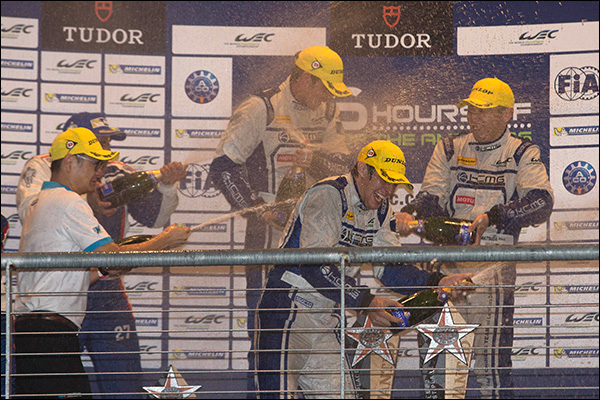 Sam Smith caught up with Bradley as he enjoyed a well-earned break in Los Angeles after the epic COTA weekend. 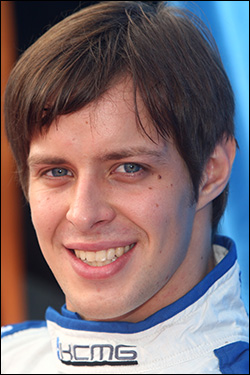 Amazingly this was my first time in the US. As soon as I arrived at COTA I went for a track walk with our team and figured the place out. What a track and facility! It was immediately apparent that it was going to be a real challenge.

The circuit took a lot of learning and getting used to, even when just doing the track walk. I kept having to go through it in my head but it was all part of the thorough learning process I like to put myself through prior to any race.

As we did the walk around, we realised it could favour us, especially as we had the new aerodynamic updates to our KCMG Oreca-Nissan.

We used the first Free Practice session to get us all up to speed. I’ve been quite lucky in that I have raced a fair bit since Le Mans. For instance, I did the Asian Le Mans race at Fuji last month. But Matt hasn’t driven since Le Mans so it was important to blow some cobwebs away.

We didn’t do any set-up work in this session and just ensured we all got to learn and understand the track. It went well for me and my team mates Matt (Howson) and Tsugio (Matsuda) and there were no dramas.

The second session was run in the dark. I absolutely love driving in the night and it is definitely one of my strong points. As a team we concentrated on just getting all our qualifying laps in for the night running and we achieved this without any dramas, despite the thunderstorm. We actually ended up with the fastest time, which I set. It was quite tough with the floodlights which actually make it more difficult than pure darkness because the light reflects off the paint on the track and also other cars, which can be quite disorientating. 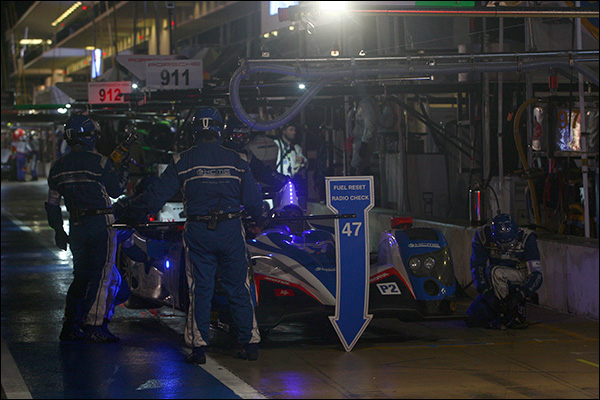 FP3 was an interesting one as it was a little wet at the beginning. Matsuda drove first and then I got in and we worked more on the set-up as we knew it would be both of us in the car for qualifying. 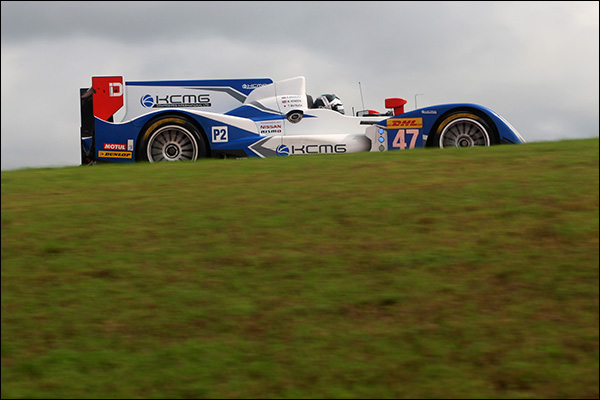 Qualifying is really exciting in LMP2. There is a tyre war with Michelin v Dunlop so there are different compounds for us to evaluate and to select. The big thing we must think about though is that the Dunlops we qualify on, we have to start the race with, so there is a lot of strategic thinking going on with our engineer Greg (Wheeler). We always have one eye on the race. 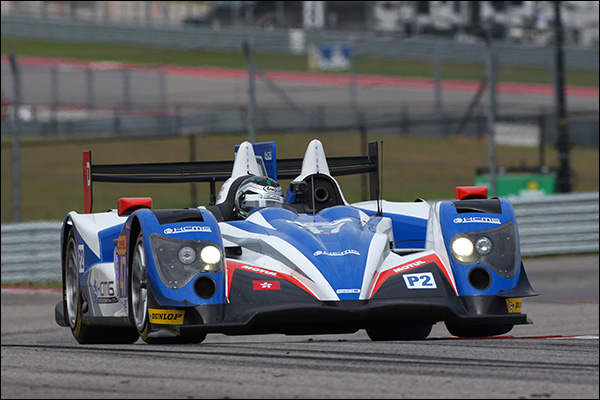 We qualified in second place and were comfortable with that, because we saw that G-Drive (who set pole) had used two sets of rubber. This gave us a lot of reassurance going in to the race. 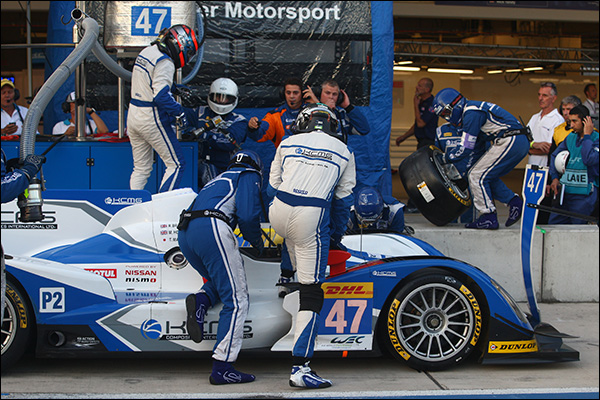 Race day was fairly relaxed. We enjoyed the autograph session and met so many great fans which was great.

The high humidity continued which suited me as I live in Bangkok and have spent a lot of my life in the Far East, where you get this level of humidity. You get used to it and I felt comfortable all weekend racing in it. 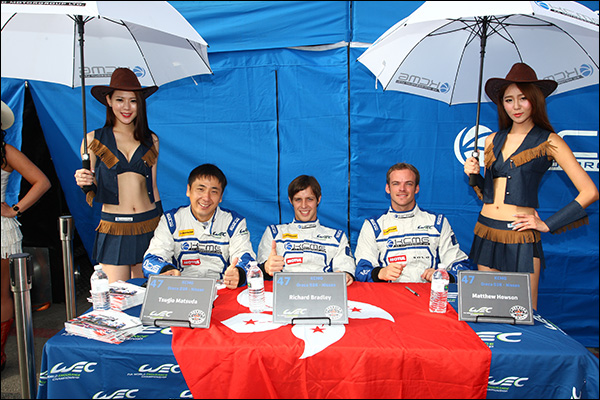 We had a strategy meeting and then there was some downtime, so I watched the TUSC race while stocking up on all the right carbohydrates, light protein and of course lots of fluid.

It was only the second FIA WEC race start for me so I was really excited. I was on a bit of a mission at the start and grabbed the lead immediately. Olivier (Pla) had a bad start and seemed to hesitate and I took Minassian and Dalziel and pulled away. 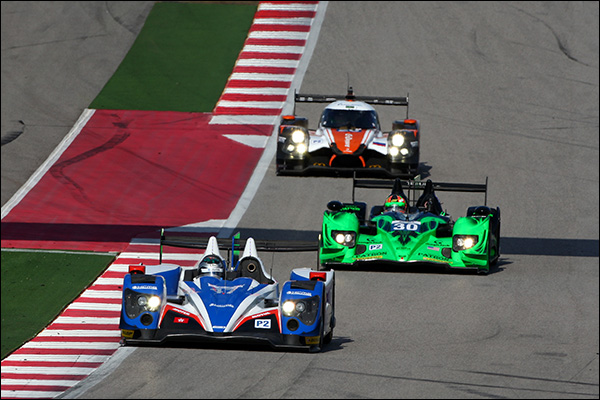 We knew that the race was not going to be won in the first few stints, so my job was to keep the car in the best position possible while looking after the tyres. The inevitable degradation in the high temperatures happened toward the end of my stints and the ESM HPD slipped by, which I didn’t mind too much.

What I did mind however was coming across Christophe Bouchut in the Lotus LMP1-L. I’m not sure what this guy was doing but he was several laps down and cost us a lot of time playing games with me and others. It was ridiculous and he just wouldn’t let me by. I was stuck behind for 10 laps. We were much quicker per lap but he had so much more power on the straights and decided to interfere with our race which was out of order.

After about ninety minutes the rain came and as we all saw it was so torrential. I am used to this happening in Sepang and other tracks so was very careful to make it back in one piece. 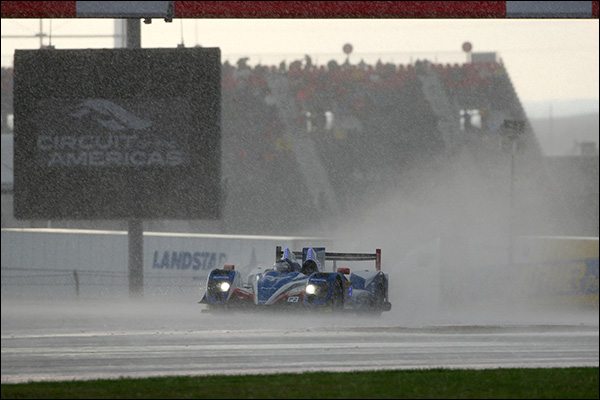 I handed over to Matt and then the red flag came out. All of a sudden SMP were 1-2. I think at that point everyone was mystified how that had happened! Like ESM we effectively lost a lap, despite keeping the car on the track and doing the sensible thing and coming in for tyres. 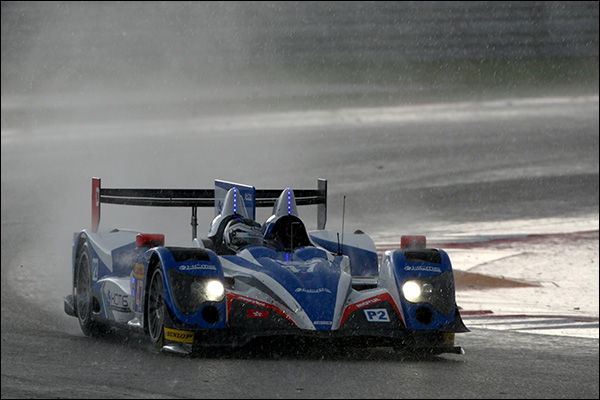 Once I got out of the cockpit I put all my energy in getting as much information about track conditions to Matt and then Tsugio when they did their stints. They both did stellar jobs in some very tough conditions.

It was all looking good but then we saw on the monitors that Tsugio had went off and was stuck near a barriers after challenging Mediani in the SMP car for the lead. All our hearts skipped a beat but Tsugio showed his experience by getting out of the situation and then driving superbly.

We managed to win the race by 44-seconds, which was very satisfying. I think that Minassian in the SMP car was suffering from a problem (no clutch) which relieved any big pressure for Tsugio, but still we had the measure of them and it was critical that we won this race so we could keep in touch in the Championship. 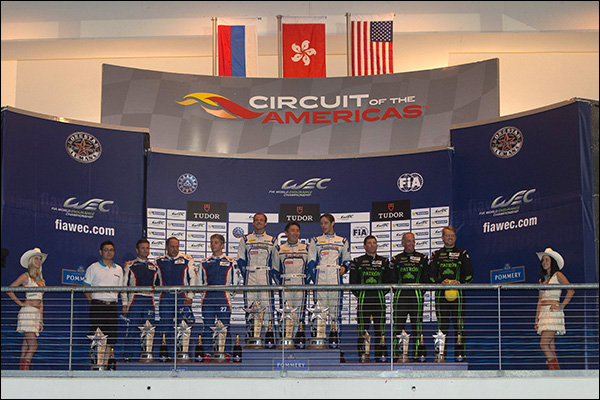 The feeling afterwards was fantastic. The whole team really deserved this monumental result and did such a great job all weekend.

Matt and I decided to head to Los Angeles afterwards to celebrate a little. Now though, we are fully focused on Fuji. It is a massive race for us, and on a track that I and the team know well. We have great rhythm and confidence going to Japan, which will be very special and we can’t wait to see all our fans there.