Here’s another of our lost gems from 2000 as Juha Kiveka debates the potential as a Le Mans winning package of both Diesel (6 years before Audi achieved exactly that), and the then new LMP675 regs – Fascinating stuff

This article or visible thinking, was initiated by a brief mention of diesel engines by the toughest guy in the LM village, that is, Paul Frère in the 2000 Le Mans Annual. Two separate subjects:

There is an efficiency benefit in a diesel.

What about an LMP675 win in Le Mans, is it possible.

Actually, no extra class for diesels is needed in Le Mans. The normal categories will do fine. How come?

The restrictor is such a clever device. It really levels all kinds of engines. The throttling restrictor defines pretty well the air mass flow into the engine. The stoichiometric ratio – that is chemically correct ratio – is 14.6 kg air per 1 kg of fuel. Therefore the restrictor also limits the fuel mass flow. Therefore we have a certain maximum fuel flow in a class.

Fuel contains a certain amount of energy per mass – approximately 43 000 kJ/kg. This value is called the specific heat value. It is approximately the same for petrol and diesel fuel. When the fuel is flowing from the tank to be burned in the engine we actually have an energy flow – that is called power in physics.

Internal combustion engines can convert only a relatively small part of this “fuel power” to useful shaft power. This interesting ratio – shaft power to fuel power – is called the thermal efficiency. The rest is wasted – eventually as heat – in every possible way. In fast revolving atmo. race engines typically up to 50% is liberated via the hot exhaust gases.

Basically thermal efficiency decreases if revs are increased or stroke/bore-ratio is shortened. Thermal efficiency is also dependent on the loading. If you consider a passenger car traveling at 80 km/h. The power required to overcome the drag and the rolling resistance on level surface is only 7.5 kW i.e. 10 hp. With 7 liters per 100 km the consumed fuel power is some 42 kW. Suppose the mechanical efficiency of the transmission and final drive is … say 85%. The thermal efficiency of the engine is then only about 20%.

To cut a long story short. The restrictor defines fuel flow. Petrol and diesel fuels are very alike in their energy content. The efficiencies of different internal combustion engines in LM racing use are close. Therefore a diesel engine could be competitive in a LM-class. The restrictor takes care of the equalizing.

As you see from the efficiencies, the diesel actually could produce a bit more power with the theoretical air flow. On the other hand, a diesel needs to have extra air to prevent black smoke. Furthermore, the W.O.T (wide open throttle) torque curve is very broad. Then again, the engine is heavier as the maximum power revs would be only around 5 000…6 000 per minute, whereas spark ignited engines can have it up to 10 000 rpm or so. So the load per cycle of a diesel engine is 10 000 / 6 000 = ..appr. 150% of that of a petrol engine of similar power. Therefore the components in a diesel need to be beefed up a lot = heavy engine. In a diesel, revs cannot be upped very easily as the constant pressure burning in the combustion chamber simply takes its time.

Also, as the diesel provides its power with low crank rpm, the gearboxes need to be re-dimensioned. That would mean extra work for Xtrac and Hewland – although it is pretty certain they would not mind.

One very tempting diesel engine for Le Mans would be the BMW V8 engine turbocharged. That would obviously mean the LM900 class. A diesel tuner could extract 550…610 hp from it – may be even more. In a diesel the maximum power is almost only limited by the maximum pressure in the combustion chamber. Alternatively one could probably do 14 laps stints in LM with still competitive lowish power output. This year the winning Audi did 12 laps a stint. 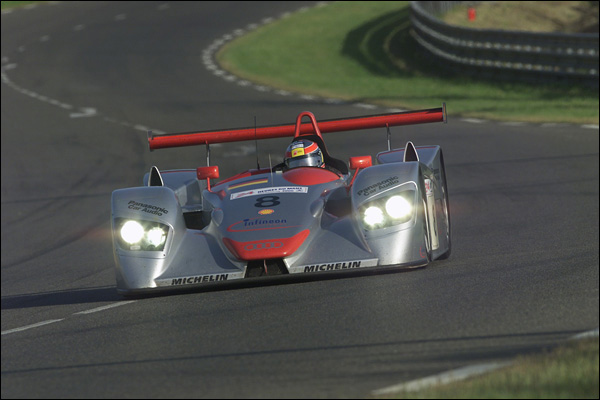 There must be some problems related to racing diesels:

Tuned performance diesels create smoke in a very nasty way especially when transiting from part load to full load. Most likely soot filters should be used and that’s more weight.
Another set of extinguishers is needed for the fire brigade
Diesel fuel leaked onto the track is problematic. It vapors very slowly – could take days. It makes the track very slippery as well. It can also get filtered into the earth – and environmentalists do not like that (neither do our children)
It could make spark ignited race engines look stupid
There is always a resistance to change things

The baby protos, that is, talking about the restrictors

There seems to be a belief that an LM675 could be competitive overall. This belief is based on the relatively similarly sized restrictor as in LM900.

To get the 550 odd hp from 3.4 litre engine means over 160 hp/litre … it simply will not last for 24 hours. What about the VW/MG 2 litre rally type engine? 275 hp/litre … there is no way to make it endure the 24 hours. Martin Birrane must look into his figures again.

You can take about 125…135 hp per atmo. litre to be sure to last till the chequered flag. From a turbo engine you really cannot take very much more unless you beef up parts massively. The turbocharged LM900s have about 170 hp/l and the Judd has some 140 hp/l – for a while. The 2 liter WRC rally engines have life spans of only about 1500 km between major overhauls – You need to do 5000 – 6000 km during the Le Mans week.

A way to be competitive in LM675? Take the 3.4 litre and about 125 hp/litre equals 425 hp – sounds like Multimatic doesn’t it? It won its class and yet even it spent ages in the pits. The more powerfull ROCs were impressive even with their 90 kg overweight – again for a while. It will be interesting to see what the 675 Judd solution is going to be like.

The conservative power output translates to poor top speed or alternatively to very poor downforce as you can always trade between drag and downforce. The fastest 675 did over 300 km/h this year on the Mulsanne.

However, it is … imaginable that especially an LM675 2 litre turbo could do the pole time. After all, it is some 225 kg lighter than a LM900. Just boost up for a lap and destroy the engine right after crossing the beacon. In the race you could be in front for a short while, making headlines for the evening news, before the inevitable smoke cloud. By morning everybody has forgotten the plot. Still one would probably have to be very light on downforce and look stupid in the Porsche curves.

It is down to reliability

At Le Mans, the cars that are reliable do the best. In the last couple of years the car that spent the least time in the pits won.