The championship went down to the wire and it was the final race of the year that decided the 2014 Australian GT Championship presented by Pirelli.

The GT Championship was down to two people – Richard Muscat in the Erebus Mercedes SLS GT3 and Tony Quinn in the VIP Petfoods Aston Martin Vantage GT3. Muscat, a rookie in the series was certainly a favourite on paper, racing for the 2013 Bathurst 12 Hour winners and coming from a stellar Porsche GT3 Cup Challenge season.

Meanwhile Tony Quinn has had had a breakout year, becoming a true title contender for the first time.

The duo saw off the advances of all the other comers – Maranello Motorsport couldn’t keep up because of their pro-am driver lineup, two-times defending champ Klark Quinn has had his fair share of bad luck in the McLaren; and M-Motorsport could never turn their qualifying pace into consistent race pace.

So it was down to two.

The final round at New Zealand’s Highlands Park would be the opening act to a 101 lap race and would feature some new machinery. The Flying B Racing Team landed in the Championship with their Bentley Continental GT3. The squad who were running a Ferrari 458 for John Bowe and saw Peter Edwards switch alliances. 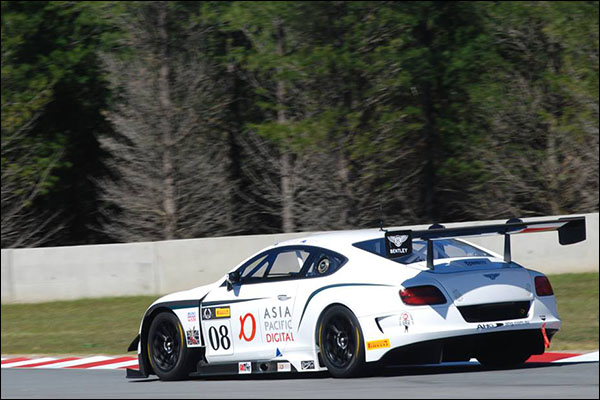 M-Motorsport brings a second car with Craig Lowndes and Inky Tulloch behind the wheel of the first Camaro GT3 to enter the Championship and JJA Racing upgraded their Lamborghini to the LP560 in the Trophy Class. 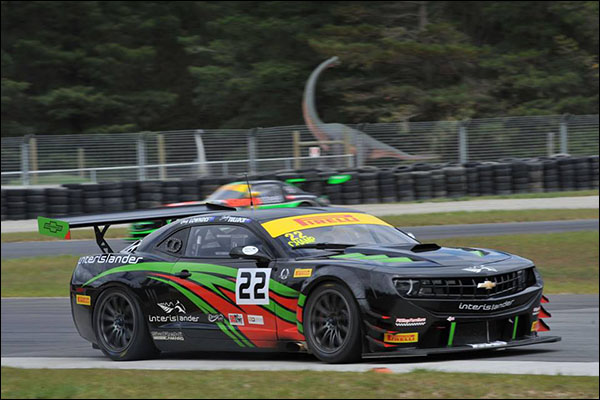 There were also star drivers on the grid for this final round. V8 Supercar drivers were in attendance with Lowndes driving the Camaro, Shane Van Gisbergen racing with Klark Quinn and importantly Garth Tander would be racing with Tony Quinn.

The opening practice sessions went without too much issue. James Winslow (Audi) topped the first session and Muscat topped the second. 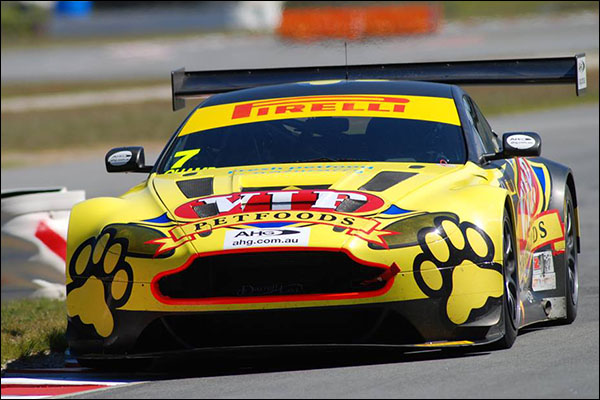 So the Championship contenders were on the front row and the drivers were talking big.

“I will be fighting to the death! Like Darth Vader!” claimed Tony Quinn.

While Muscat said his cars “was on rails” and looked forward to the Title battle.

Steven Richards, Jono Lester (Ferrari) and Bowe filled the top five – and the runners in the 1:33s. Van Gisbergen did qualify sixth with a 1:34.043 but an oil pump saw him and Klark Quinn start at the back. It was a miracle that they were able to start at all with parts being couriered overnight from Melbourne so the car could start.

The effort was a massive undertaking with even McLaren GT getting involved to get the parts of the car to New Zealand for the race.

The two races for the weekend would be 40 minute affairs.

The first would start well but end badly as Keith Kasulke would bury his Ascari hard in the wall after an ABS failure. While Keith was taken away for observation, he was reported to be ok. It was also the first race back after an engine fire damaged the car a few rounds ago.

The extended safety car meant that the racing was effectively run over eight laps.

Muscat took the win with Bowe in second and Tony Quinn/Tander in third. Jim Manilios took a career best fourth in his Ferrari.

After race one, Muscat held the edge.

“We got the jump off the line and I pulled out a good gap, around 18 seconds, before we had to pit. When I re-joined there was about 14 minutes to go in the race, and then the safety car came out,” Muscat said 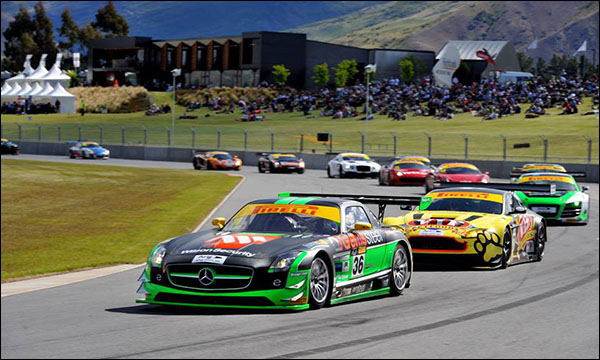 “So the race finished under safety car conditions, but I did come out of the pits first which obviously gave us the win. I would have preferred to race to the end, but at the end of the day if somebody gets hurt the race should not restart, so full credit to the Australian GT category and the officials.”

The second race would see Garth Tander get the jump. Muscat would give chase, knowing he doesn’t need to beat the Tander/Quinn car to win the Championship.

The first 10 minutes saw a brief safety car to recover the Ross Lilly/Paul Kelly Lamborghini. Otherwise it was a clean race when the pit window opened.

Of note was a charge through the field for Lowndes who started 19th and was 5th by the time he pitted and Tander set a lap record – a 1:32.357 before his pitstop and driver change.

On lap 12, Tander pits and Muscat assumes the lead. Muscat pits soon after and he would soon take up the fight to his Championship rival.

Muscat took the lead just before a safety car came out as Jono Lester suffers a mechanical issue with his Ferrari.

The race and the Championship would come down to a four minute shootout. Muscat would hold his nerve as the green flag came out to win the race and Championship from Quinn, John Bowe and the repaired van Gisbergen/Klark Quinn McLaren.

“He made a cunning move,” Tony Quinn said of Muscat’s late race pass for the win. “It was always in my book to pass there but he deserves the win. He is a great driver and a great ambassador for motorsport.”

Muscat went into the fight with his eyes open, not defending too hard against those not in the championship battle but taking the advantage when it was offered. 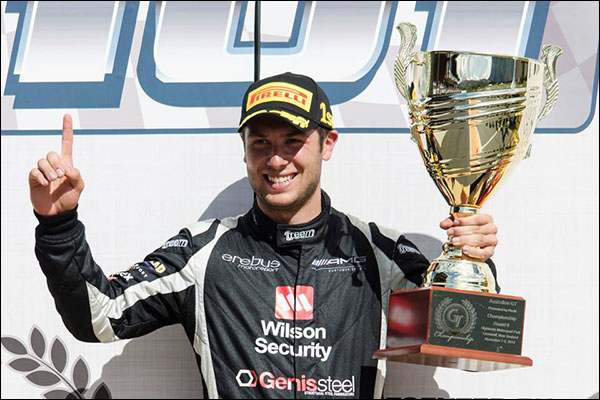 “After the pit stops we came out about five seconds behind the Aston Martin, and it was a good battle,” Muscat said.

“Tony defended well but I managed to get by him coming off the bridge under brakes which was quite cool.”

“It’s been a fantastic year of racing!”

“I’m really happy to have sealed the Championship but I couldn’t have done it without my fantastic Erebus family and the awesome SLS, and all my sponsors.”

After losing the title so close to the end a couple of years ago, it was important for Erebus to take the title this year.

“Betty’s belief in her GT team and her SLS ‘babies’, Athena and Hecate, are what drives a grumpy old man like me to continue to be passionate about Motorsport and Erebus.”

“There are many people who played key roles throughout this year: Damo and Drew, our only full-time GT staff, and all our dedicated part-time crew should all take a bow.”

“Richard Muscat who showed what a true Champion he is – he keeps pushing the envelope with what he can do in a race car.”

Not only was the outright Championship on offer, the Trophy class saw a tough battle. Rod Salmon in his Audi was battling with marque rivals Dean Koutsoumidis/James Winslow. Despite a drive through penalty Salmon with co-driver Nathan Antunes was able to hold on and take the Title.

Ben Foessel was able to defend his Trophy Class Championship. Racing with father George, the duo held out the title rivals Matt Kingsley and Brendan Cook.

Mark Griffith won the GT Sport Championship in his Ginetta G55 GT4 beating out Tony Martin in a similar car.

The 2015 season will get underway on the Adelaide street circuit in March.