Aston Martin Racing will be going into the final race of the season with pole position in both GTE classes once again. The #97 of Stéfan Mücke and Darren Turner went quickest in Pro, and the #98 took the honours in Am after times set by Pedro Lamy and Christopher Nygaard.

Aston Martin were first out of the pit-lane, first to set a time, and first on the timing screens for the whole session. Another dominant outing for the British marque.

Two stellar 1:29 laps by Mücke set up the #97 for pole. Turner couldn’t quite match his teammate when he climbed aboard, but he was quick enough to finish ahead of the other runners and hand the team yet another perfect starting position. Their average was a 1:30.111 after four laps.

“Stéfan did a great job once again,” Turner said after getting out the car. “I struggled to start, but on the second lap the tyres calmed down and helped up get a good lap average. Stéfan is starting tomorrow so I can relax for the first stint.” 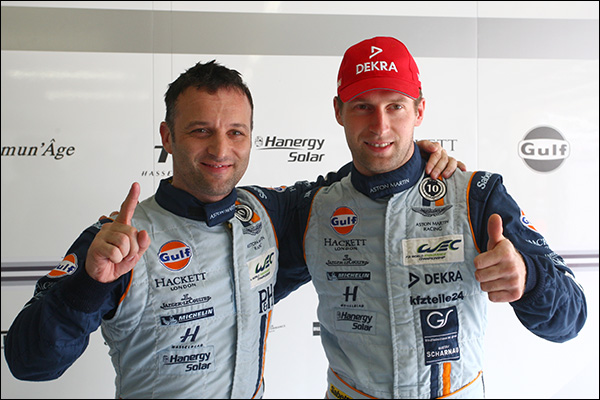 Second in GTE Pro was the #92 Porsche of Fred Makowiecki and and Patrick Pilet, just one tenth off the pole time while the #99 Aston of Fernando Rees who was rapid on his home circuit when he went out and Darrell O’Young ended up third.

The session was red flagged with just over two and a half minutes remaining in the session due to the Prospeed Porsche getting stranded out on track, this ruined quite a few laps for the runners, and set up a mad dash at the end. Only the AF Corse Ferraris would rejoin the season when it went green again however, and didn’t manage to improve their times in what was a disappointing outing for the Italian squad.

AF Corse’s #71 Of Davide Rigon and James Colado was the quickest of the gaggle of 458s in the session, but only managed 5th in the Pro class after being just four tenths slower than the #97 Vantage after four laps. Looks like it will be another astonishingly close-fought battle in GTE for the whole race.

The #98 took the top spot in the Am class, another great outing for Nygaard and Lamy who managed an average time of 1:30.493. AF Corse filled the rest of the top three in the class, the #81 ended up second, with the #61 earning third spot on the Am grid.