Risi Competizione endured a rollercoaster of outcomes and emotions during the inaugural Tudor United SportsCar Championship season, and after initially considering a shortened campaign in 2015, team manager Dave Sims tells Marshall Pruett, the team will return for a full season with its Ferrari F458 in the GT Le Mans category.

“We’re working now on our plans for the Roar test next month; I put in our entry with IMSA for the year, and Giuseppe Risi’s off to Italy shortly to confirm all the aspects of the program,” he said. “We’ll do the full season, and we’re just confirming drivers at the moment.” 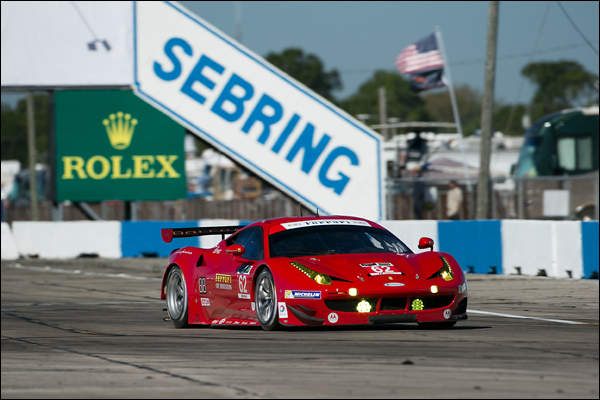 Risi campaigned the #62 Ferrari last season with ex-Formula 1 driver Giancarlo Fisichella for the full championship and Pierre Kaffer at various events after Matteo Malucelli had been dropped following incidents at both Daytona and Sebring. It appears the Italian-German combination will return with another driver to be nominated. “Giancarlo and Pierre worked quite well together, so it looks like we’ll have them back and Mr. Risi’s working on the identity of the third driver,” Sims noted. “That driver’s TBA until he returns from Italy.”

Sims previously mentioned Risi’s desire to return to the 24 Hours of Le Mans, and says it remains high on the team’s list of priorities as the new season approaches.

“We had an e-mail from IMSA saying they were going to give three invitations to their teams and that we were one of them, which obviously didn’t happen; they only gave two,” Sims explained. “We were disappointed, but Giuseppe still wants to do it, so we’ll just have to put a normal entry in and see how that goes with our friends from the ACO.”