The Porsche Curves section of the Circuit de 24 Heures was built in 1972 in an attempt by the ACO not only to create a permanent track for the 24 Hours of Le Mans, but also in order to bypass the ultra-fast and dangerous Maison Blanche section.

As many DSC readers will know the Porsche Curves are a series of four corners beginning with a bumpy right-hand curve followed by a narrow double-left (also called the Virage du Pont / Bridge Corner). It ends with the right-hand corner, where Marc Gené’s Peugeot 908 and Loic Duval’s Audi R18 violently collided with the track’s protective walls, in 2008 and 2014, respectively.

The Porsche Curves are considered by most drivers to be one of the best and most challenging sections of the 24 Hours of Le Mans racetrack, partly due to the fast entry/exit speeds they allow. Some like to call them ‘men’s corners’.

On 4 December, DSC revealed that the Syndicat Mixte des 24h du Mans (the public organisation in charge of managing large investments for the track) had budgeted close to 600,000 euros to revamp this section in 2015 while still preserving the original design. The Syndicat has now disclosed the following details surrounding the project:

810 m2 / 30% of the existing gravel trap will be replaced by a Paul Ricard-style abrasive bitumen coating. This will give drivers an additional sanction-free run-off area on the outside of the curve. The back of the gravel trap will also be equipped with tyre walls and FIA protective fences covering a distance of 200 metres. 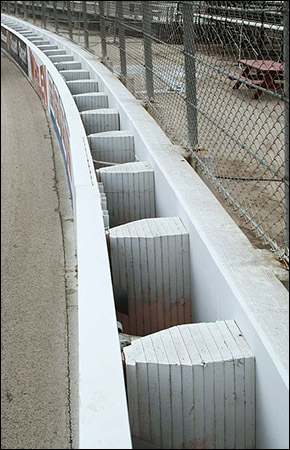 Throughout this double-left corner section, the Syndicat will also introduce SAFER (Steel and Foam Energy Reduction) barriers over a distance of 220 meters. It is the first time this technology will be used in La Sarthe.

These barriers are commonly used in the United States, in particular on Indycar and NASCAR tracks. They are made of a high-strength tubular steel skin that distributes the impact load to energy-absorbing foam cartridges.

Over the past ten years, this technology has demonstrated the capacity to reduce the severity of an impact and provide the drivers with additional protection in case of a crash.

The curbs of the corner’s entry/interior will be extended by approximately 20 meters (Vallelunga ‘5 cm’ type).

Work on the Porsche Curves is set to begin in February 2015 and is expected to be completed by mid-May 2015.