It’s a first overall Dubai 24 Hours win for all four drivers in the #2 Black Falcon Car, Al-Faisal, Buurman, Webb and Haupt and the third win at this race for the team, Bleekemolen, Schneider and Al-Qubaisi triumphing alongside the late Sean Edwards in 2013 and the first win coming in 2012.

“I think we’ve got the record number of laps completed in this race and the car was pretty faultless all the way through,” Webb told us afterwards. “The team did an incredible job and for me to win it outright by that many laps in my second year is a real feat, I’m really really happy. The traffic was the challenge more than anything this year with 95 cars entered on such a small track. It’s a shame about the sister car, but we were lucky to be quicker than them pretty much most of the weekend, which is great for us an Abdulaziz as a local driver. Awesome job by the team and I’m looking forward to some sleep now!”

Al-Faisal said: “That’s been a very long time coming, a fantastic way to start the year and a very nice early wedding present! By far the biggest race win of my career.” 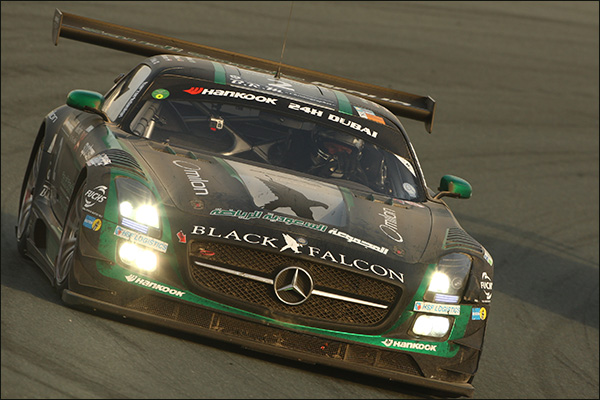 Last year’s race winners Stadler Motorsport were undone by serious suspension damage that put the #1 Porsche out of the race, while another hopeful for a strong result, the #3 Black Falcon Mercedes was also put out of contention by contact with another car, leaving its chassis too badly damaged to repair on-site and denying Bleekemolen, Schneider and Al-Qubaisi the chance to add to their 2013 silverware.

The polesitting #12 Fac Auto Tech Porsche’s charge also came to an end relatively early in the race, stopping out on track just before 6pm on Friday. Triple Eight was the sole BMW representative at Dubai this year, and although the Z4 wasn’t quite on the pace of the phalanx of 12 Mercedes SLS, it was a differential problem that ultimately frustrated the British team’s ambitions, limiting Osborne, Mowle, Hollings and Duyver to a 19th-place finish.

The GT Russian Team Mercedes had shown strongly for longer, looking a good bet for a podium position at times, but a seized rear brake problem cost them too much time and the car’s drivers Asmer, Korjus, Vasiliev and Al-Azhari having to be satisfied finishing inside the top 20 in 15th overall.

A cooling issue for the #67 GDL Racing Mercedes and more terminal problems for the #33 SPS Mercedes put both of these top-five contenders out of contention later in the race. On the other hand, a bit more luck and reliability could have seen the #69 Gulf Racing Lamborghini on the A6-Am podium. As it was, Goethe, Fatien, Cambell-Walter and Hall came fourth in their class and an impressive eighth overall.

Just ahead of them was another car with the potential to run higher up the order, the Scuderia Praha Ferrari of Kox, Pisarik, Jirik and Malucelli that started from the back of the grid due to missing qualifying. A demon opening stint from Kox got the car back into contention, before they had to almost do it all over again when the car was damaged being collected by a spinner, resulting in a decent sixth overall, just off the A6-Pro podium.

The #99 Attempto Racing Porsche turned out to be a real surprise package, putting old-fashioned consistency and reliability to good use to climb gradually up the top 20 and end up seventh overall and third in A6-Am at the flag for Aka, Liehm, Kleinbach, Wlazik and Barazetti.

Fifth overall and second in A6-Am was close to a perfect result for the debuting Nissan GT Academy stars Paletou, Hamann, Bin Khanen and Sanchez, plus their mentor, the 2013 German winner Florian Strauss. No major incidents and disciplined keeping to the reference lap time meant the result came to them, a thoroughly satisfactory outcome for Bob Neville and co. to start 2015 with.

KPM will be rueing a wheel-hub problem that robbed Paul White and his Aston works co-drivers Jonny Adam and Stefan Mucke of an almost certain overall podium finish in their #28 V12 Vantage. Mucke did manage to record the race’s fastest lap as consolation on the way to fourth overall and third in A6-Pro.

“Yeah, we were a bit unlucky,” reflected Adam afterwards. “We lost I’d say about four laps, which would’ve left us close with Ram towards the end. We had good pace, it was a good run and Paul drove really well. It’s good because it shows the car is quick in this championship, we know it’s good in Blancpain and British GT. The traffic is good, it keeps you sharp, as a pro driver, at this time of year you want a race like this where you overtaking all the time and going from dark to daylight.”

“Elated but of course frustrated,” was Paul White’s verdict. “We were a proper Pro-Am mix in a full Pro class, but if anyone was going to knock us off an overall podium I could hardly complain that it was the Ram boys [including Paul’s 2014 team-mate Tom Onslow-Cole].”

Local outfit Dragon Racing delivered a masterclass in how to operate within the A6-Am class’s 2:04 reference time to take the class win and still score a strong overall race result. The team’s gentleman driver Mohammed Jawa put in some impressive stints in his own right, and combined with controlled aggression and smart use of ‘joker laps’ faster than the nominated time from the more experienced Jordan Grogor, Matt Griffin and Rob Barff was enough to bring the red #88 machine home on the overall podium.

A delighted Griffin summed it up: “A brilliant run really. I’m happy to win Pro-Am but for me to finish third overall is really important. And the other thing is this is genuinely a local team, the workshop and cars are here in Dubai. It’s amazing, I’m really happy.”

GT Academy mentor Rob Barff was just happy to have beaten his young charges in the #23 Nissan! “We set our stall out early by just doing 2:04.1s for two hours at the start of the race. We ‘released the Kraken’ when we needed to towards the end but we stuck to our gameplan and it kinda worked. We’re now left number-crunching and wonder if we could’ve averaged a faster lap over 500-and-something laps, where would that have left us, but it’s all just ifs and buts really.”

Ram Racing marked its rebirth with a superb second overall after a near-flawless run in their brand-new #30 Mercedes SLS AMG GT3. Team newcomers Tom Onslow-Cole and Adam Christodolou, along with Mercedes man Thomas Jager, shouldered the lion’s share of the driving alongside team patron Cheerag Arya – an annoying but not performance-limiting transponder failure being the only real issue with the car over the 24 hours.

“Almost there, but it’s been a great comeback for the team,” Christodolou told us afterwards. “Our goal was to come to the race and get on the podium. We’ve shown we’ve got the pace, the start didn’t exactly go as planned, but there’s always going to be a bit of bad luck in a 24-hour race and we had ours at the start so we just had to keep chipping away during the race. If someone had told me I was going to finish second in a brand-new car and team this weekend I’d have taken that – it’s great!”

There’s little to say about the victorious Black Falcon car’s performance beyond the fact that it barely put a foot wrong all race. Pit stops, driver changes and refuelling were repeated with metronomic efficiency for the full 24 hours, and when this was paired to the prodigious pace of Ollie Webb and Yelmer Buurman in particular, the four-lap margin of victory was the result. Neither Haupt nor Al-Faisal’s contribution should be diminished, however, with the latter particularly impressive in this race’s notorious heavy traffic. The only unanswered question is just how hard Bleekemolen, Schneider, Simonsen and Al-Qubaisi would have pushed their sister car had they remained in the race for longer.

The other class winners

A great start to the Dubai 24 Hours partnership with Hankook, lots of praise for the product from the drivers, and not a single puncture that we can recall unrelated to accident damage.

And we can’t sign off without recognising the tremendous achievement of the Mission Possible crew, four physically disabled drivers coming home 49th overall and fifth in the CUP1 class in their adapted BMW M235i Cup car after the full 24 hours of racing, definitely the start of something big.