The unveiling of the new for 2016 Ford GT at the Detroit Motor Show, aka the North America International Auto Show, is the first round from a starting gun salvo that will see the blue oval return to frontline GT racing next year as a factory team. 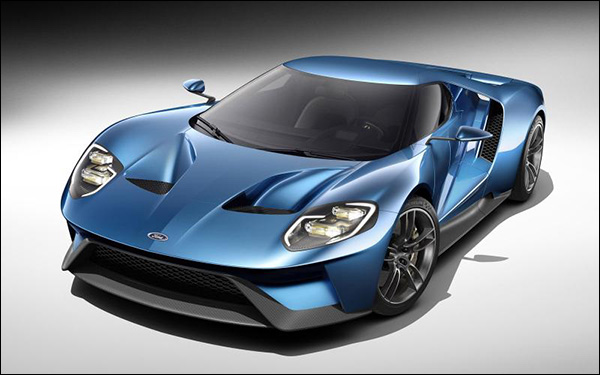 The announcement of the expected LM GTE programme will come rather closer to the middle of this year but expect to see the new Ford GTs racing at Le Mans in 2016 in a highly appropriate tribute to their illustrious forebears, 50 years on from the first of what would become four wins for the GT40 in various forms.

It will also see the Ford factory represented at Le Mans for the first time since the ill-starred C100s entered on the factory’s behalf by Zakspeed in 1982. 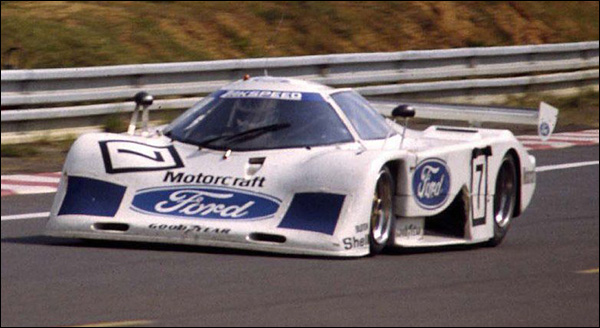 It will be the first Ford entered since the surprise podium finish for the Doran built Ford GT of Robertson Racing in 2011. 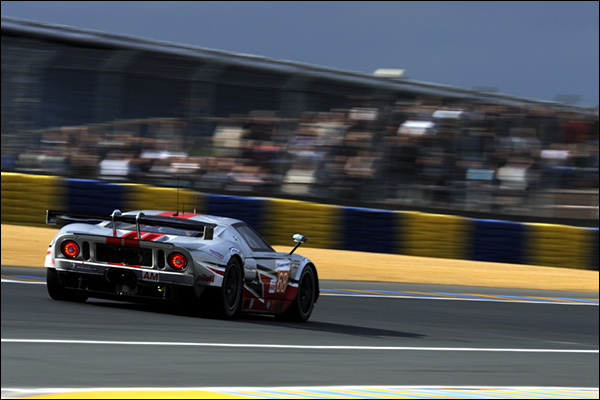 Ford are justifiably proud of the heritage of the original GT40, a car whose story is destined to be told and retold in the coming 12-18 months.

The 21st century though saw a resurgence of interest in the car, with Ford’s last hypercar project, the Ford GT of 2005/6 sparking a number of racing versions, notably the GT1 and GT3 versions built by Martin Bartek’s Matech Concepts. 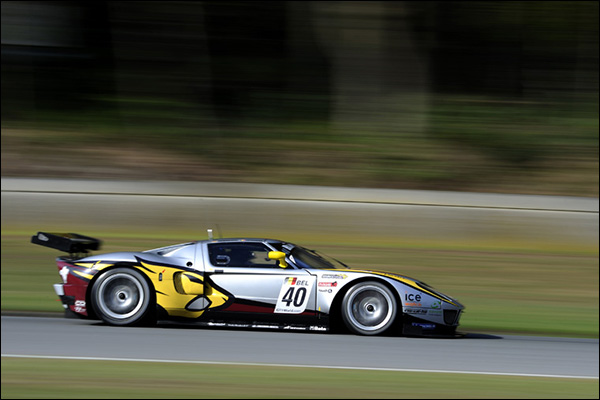 Those cars took race wins in both the FIA GT1 (above) and FIA GT3 Championships (below), (the Matech team taking the 2008 FIA GT3 title). 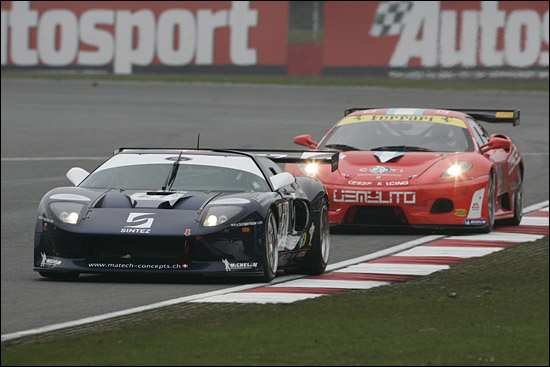 Some of the GT3 cars race on, with recent appearances in Asia for one of the Matech built cars, other having made their way to Brazil for the now defunct national GT3 series there.

Matech and Marc VDS raced the GT1 cars at Le Mans too, though neither team posted a finish. 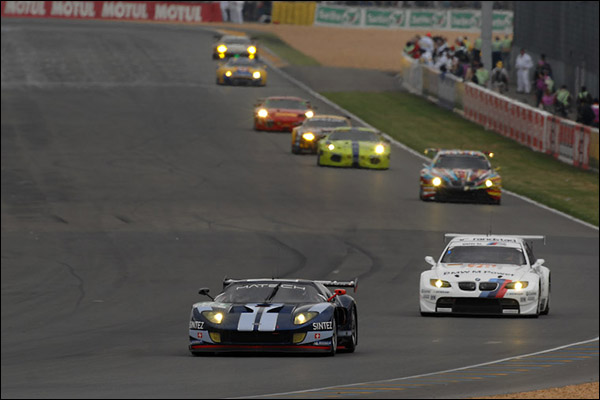 Two were campaigned by the Robertson Racing team (in the ALMS, and, to that fabulous Le Mans result), Black Swan Racing ran a Falken Tires backed car in the ALMS in 2008 (below). 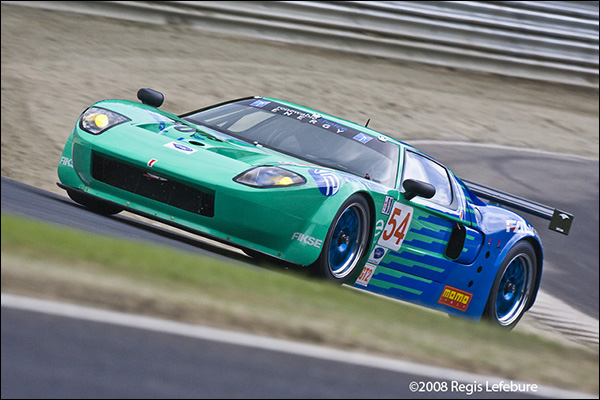 The ex Black Swan car was briefly (the car written off in a practice shunt on its debut at the 2010 Petit Le Mans) campaigned by ACS Express Racing.

The ex Matech GT3 project was bought by Lambda Performance with cars appearing in the ADAC GT Masters, and taking a race win (below) but plans for a GTE version came to nought. 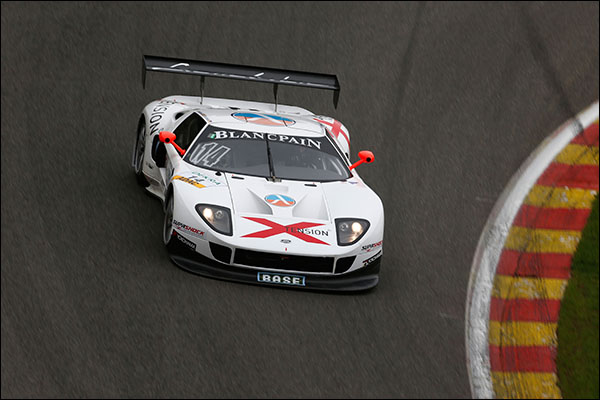 The Nordschliefe has seen Ford GTs racing recently too with first Raeder Motorsport with a Matech built car and then another ex Marc VDS (Matech built) car, campaigned to good effect by Juergen Alzen Motorsport in the VLN and at the Nurburgring 24 Hours (the Alzen car is below). 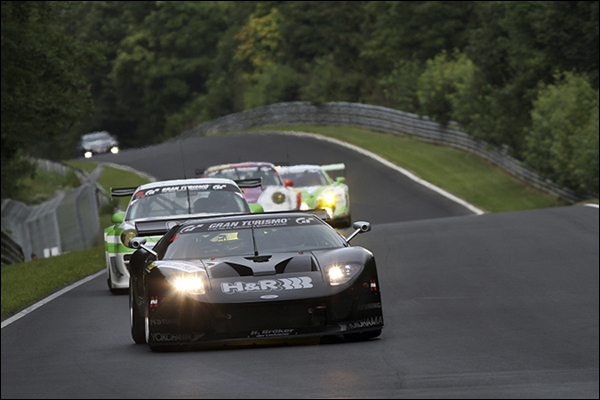 The Raeder effort managed to set a memorable pole position at the Nurburgring 24 hours in 2009 and went on to have a fantastic battle for the lead of the race in the opening hour. 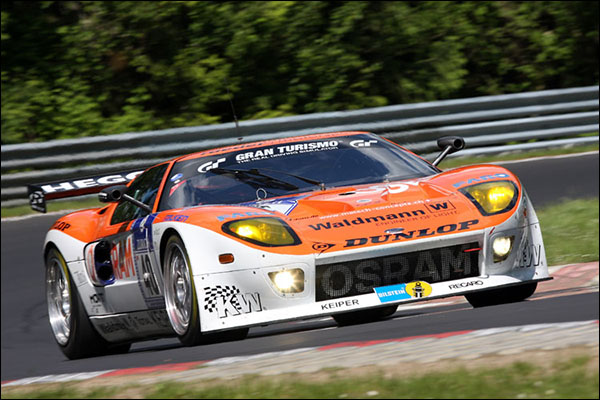