Riley Ave AR-2 and catching up with Mike Croake

Back in July 2014 the ACO revealed outline regulations for the proposed introduction of a new prototype category to be designated LMP3. Envisioned as a starter or entry-level gateway into sportscar racing (viewed by some as an evolution of LMPC, or Formula Le Mans as it was known in Europe), essentially for young or gentlemen drivers, LMP3 would be based around regulations that demanded a cost-capped carbon-fibre shark-finned coupé that resembled LMP2, but snuck in just a few centimetres shorter.

At the heart would be a stock Nissan V8 engine, producing around 400 bhp, to be supplied via Oreca. Additional rules and regulations, such as refuelling strategies and the number of personnel allowed to work on the car during race weekends, would ensure that expenses would be kept under control, and teams and drivers could arrive at accurate budget assessments for running costs. The cars would be eligible to compete in the 2015 European Le Mans Series and, at a later stage, the Asian Le Mans Series.

The initial reaction from within the industry was largely positive, and a surprising number of potential manufacturers put their hands in the air to express interest in supplying eligible chassis. At one stage that list included the likes of Onroak Automotive (Ligier), Tatuus, Juno, Norma LAS Motorsport (ADESS AG/ Sébastien Loeb Racing/SORA) and Riley Technologies, but as the months passed that number dwindled somewhat. 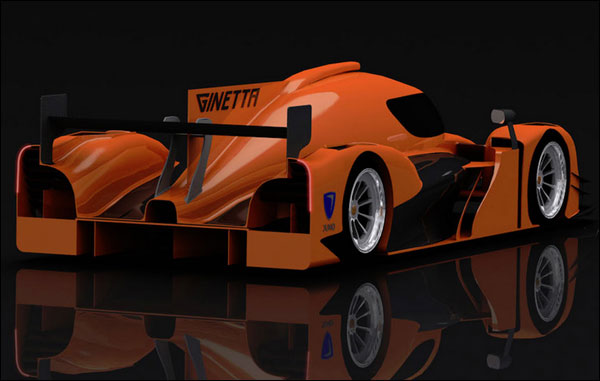 The first to break cover, however, came from a largely unexpected quarter, with Ginetta’s Lawrence Tomlinson revealing his intention in August to acquire Juno and become the first to commit to an LMP3 chassis (above). Then, in the weeks before Christmas, LAS Motorsport revealed design sketches (below) not only for an LMP3 candidate, but also a “Challenge” variant aimed at track-day enthusiasts. 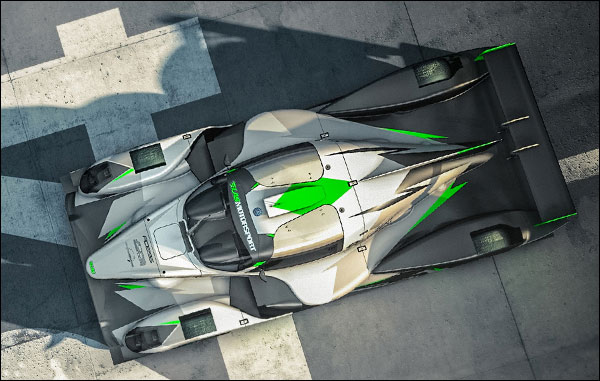 The first Ginetta Juno is expected to roll out of the workshops in the coming weeks, with the first tub being unveiled last Thursday on the University of Bolton stand at the NEC. LAS meanwhile are currently courting potential customers, Sebastien Loeb racing does not plan to run a ‘factory’ car at present, giving the British-built car a big lead in the marketplace (below). 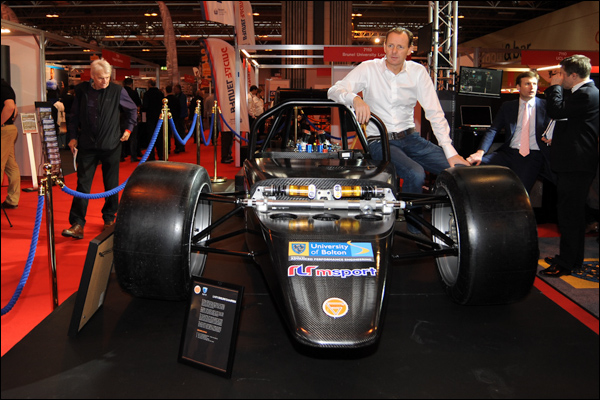 At least six customers for the Juno are already confirmed, including the Centre for Advanced Performance Engineering (CAPE, with RLR Msport), SVK by Speed Factory Racing (2 cars), Lanan Racing, Greaves Motorsport (below), Rollcentre Racing and, of course, Team LNT with drivers Sir Chris Hoy and Charlie Robertson alongside a ‘factory’ car for Lawrence Tomlinson and Mike Simpson. 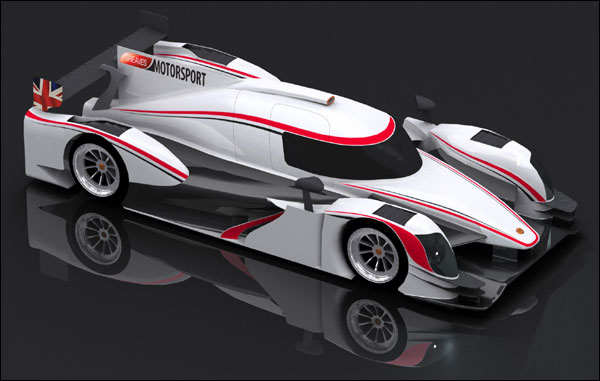 Arriving slightly later to the party, and only announced a week ago, is the contribution from Riley Technologies in the States. In collaboration with Ave Motorsports, Riley confirmed on January 6th the intention to build an LMP3 contender to be designated the AR-2 (Ave Riley-2). Both companies are based in the Charlotte area of North Carolina, and both have a long history of joint association and shared reputations for creating reliable, well constructed racecars.

We caught up with Mike Croake, Director of Product Support for Riley Technologies, on the Aurora Bearings stand at the NEC.

“We’re very excited about the LMP3 project,” said Croake. “With the ACO behind the concept, there’s the making of a strong international series, and the profile will have a huge appeal for gentlemen drivers. Having the category cost capped is very important; since it means drivers and teams can be confident that there won’t be any cost creep in a racing program, and they can budget accurately for their season. That degree of certainty has to be good for us as manufacturers.” 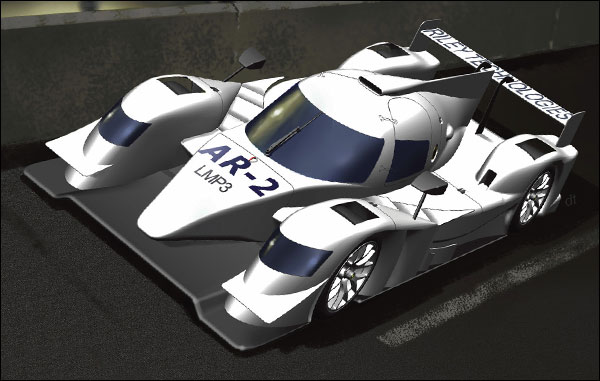 The AR-2 is in the early stages of development at the moment, and is probably several months behind rival projects from Ginetta-Juno and LAS. However, Croake is confident that Riley and Ave can catch up, thanks to their background and experience. “Some companies might put a project like this into the hands of a junior level design team, but not here at Riley. We’ve set this challenge to our A-Team and we’re treating the LMP3 program very seriously indeed.” Bob Riley himself is heading up the design alongside Garrett Brady, who will be masterminding the mechanical design and bodyshell. Construction will be undertaken at Ave Motorsports’ workshops.

Riley Technologies and Ave Motorsports have been working together for many years, since their first joint venture into the Oldsmobile Pro Series. “Our links with Tony (Ave) go back a lot further than people realise. Tony also bought one of our last generation TransAm designs … and sold 17 of them.” In fact, the TransAm AR-1 has won four of the last five championships. “He’s based only 20 miles down the road from us, and that allows for a very close relationship. This is a great opportunity for him to advance his production unit from the TransAm cars. It will also move Ave Motorsports into the international market – which can’t be bad for a boy from Northern Wisconsin!”

“We have the bodywork laid out already, and the next challenge is to address the suspension. It will be an evolution of the familiar Riley geometry, which is race proven and effective, and has been developed over many years, from Trans-Am through Daytona Prototype and on into this latest project. Generations of top drivers have consistently said that the Riley set-up and geometry creates one of the best-handling cars they’ve ever driven, and we’re confident that the new AR-2 will inherit those same characteristics,” says Croake. “The design parameters will be based upon our Daytona Prototype level for strength and durability, and our results from the Daytona 24 Hours suggest this will be excellent for endurance racing.”

With so much still to be done the timescale is somewhat longer than that scheduled for the other two LMP3 contenders, but the intention is to have the first car on track by the end of the third quarter or early into the fourth of this year. “We’re also working on establishing a distributor and support network, and customer service will, of course, be very important to us. The benefits will come from our experience in supplying and supporting 20 plus Grand Am cars. We intend to make running an AR-2 as easy as possible for our customers!”

“Another extremely important aspect of the LMP3 class, apart from the engine, drivetrain and electronics, is to ensure an open marketplace,” says Croake. “As a constructor, it’s the way we can prove our products. If the customer is faced by two, three or four choices we’re confident that we can offer a product that will make the decision so much easier.”

At the moment LMP3 will be focused on the European Le Mans Series (and subsequently the Asian Le Mans Series), but the eurocentric aspect of the class doesn’t faze Croake. He insists that a company with the resources and experience of Riley Technologies can service customers on both sides of the Atlantic. “Of course, we hope there will be a professional series in the States, but we also believe there will still be a demand for the AR-2 in the US regardless of this, from gentleman drivers wanting to use the cars for track days.” It seems all three manufacturers see private sales of their respective LMP3 contenders as being an important aspect of justifying the cost of design and development.

Those cars intended for competition will all have to meet the strict cost-capped price of 195,000€. The fact that this is stipulated in Euros, rather like the oil price is quoted in Dollars, could be an unwelcome obstacle for manufacturers outside the Eurozone. “Of course, that’s great for teams over here in the UK, since it means [with the declining value of the Euro] that the cars are getting cheaper by the day, but we’ve anticipated this. We don’t believe it’s going to be an issue for us, and we certainly won’t be compromising the quality of the car, regardless of how far the exchange rate falls.”

Croake admits that the initial response to the announcement of the AR-2 has been very encouraging. “We only announced the project a couple of days ago, (January 6th) and already we’ve had people coming to talk to us with serious proposals.” Looking ahead, he doesn’t shy away from the possibility that an LMP2 car might be on the horizon. “It’s certainly in our timeline, but maybe two full racing seasons away yet. Perhaps we’ll be thinking about that for 2017.”