20 years on from the historic overall win at the Le Mans 24 Hours by the McLaren F1 GTR there are a number of opportunities planned to remember the last time a firmly road car based effort took the overall crown.

The McLaren 650S Le Mans will be offered as a coupé only, and will borrow a number of styling enhancements from the iconic race-winner, most notably the roof-mounted ‘snorkel’ air intake. This fully-integrated ‘snorkel’ channels airflow to the familiar 3.8-litre twin turbo V8 engine, “while also providing enhanced aural drama within the cabin”, while the front wings feature subtle louvres to reduce pressure over the front wheels, increasing downforce.

The unique ‘Le Mans Edition’ lightweight wheels, 19-inch at the front, 20-inch at the rear, are styled around the design of the motorsport rims fitted to the 1995 racers. The rims wear the McLaren-developed Pirelli P Zero™ Corsa tyres and are mounted in front of carbon ceramic brakes as standard, with McLaren Orange callipers.

Peter Stevens: “The design of the McLaren F1 rewrote the rulebook. It was intended to offer the ultimate, no compromise road driving experience. The fact that it was transformed into a racer, and a race winner, was true testament to the strength and integrity of the original design, which is something I am very proud of.

“With a mix of subtle design traits, the 650S Le Mans adds a modern twist by blending the iconic lines of the McLaren F1, and heritage features such as the wing louvres and the roof-mounted air intake, with groundbreaking technologies. It is a fantastic homage to that original design, and to the incredible race result achieved by the team in 1995 at one of the most difficult, and most challenging races in the world.”

The much anticipated ‘GTR’ version of McLaren’s P1 hypercar meanwhile is set to debut at the Geneva Motorshow in March after a hugely extensive test programme. 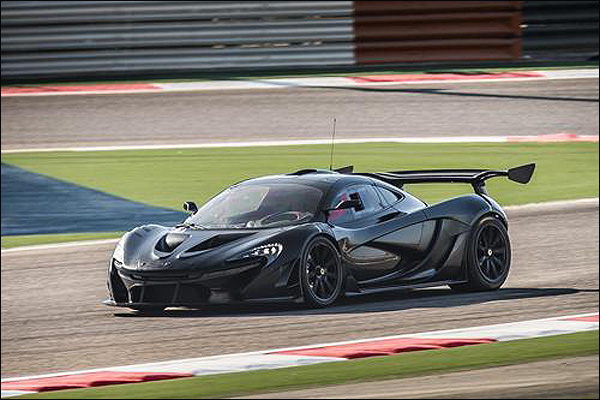 The P1 GTR is a track only version of the P1 and will boast a power-to-weight ratio increase in excess of 10 percent over the road-going model, to more than 700 PS per tonne.