Back to the UK, on a BA flight packed with racers, and lots to think about (and write about) after a very interesting week stateside.

Before boarding though there was time for a quick beer and a chat with one of the most eclectic and interesting airport lounge trios I’ve ever encountered: Henry Pearman, serial Group C collector (and now dealer!), racer and builder of the simply stunning Eagle E Type (amongst other things!), Alex Brundle, emerged disappointed from Daytona after engine woes ended the Krohn Ligier effort but looking forward to what might become a busy 2015, and Jochen Mass (plus his absolutely charming wife) Grand Marshal for the event and, of course, racing legend.

Confirmation came DSC’s way post race that there had been no contact between the #007 TRG-AMR Aston Martin and Marc Lieb’s factory Porsche leading up to the moment that saw Earl Bamber run off track and then hit his team-mates car. 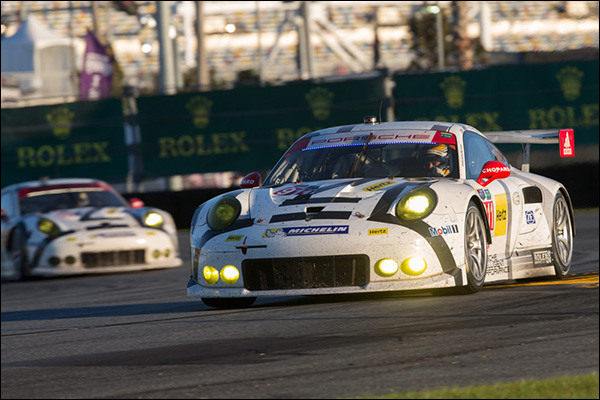 As I boarded the flight home I was handed a copy of ‘i’ the tabloid version of the Independent daily newspaper. Astoundingly the issue had a short story in the sports section about the Rolex 24 Hours, in fact it was about Andy Lally’s unfortunate clash with an opossum (this is in a daily newspaper from the UK remember!). Equally astoundingly the reporter clearly thought that a Porsche 911 has the trunk in the rear of the car, the copy before the edit that followed a tsunami of scornful comment describing the unfortunate animal as having passed through the cockpit before being found in the trunk!

Porsche btw continued their unrivalled run of Rolex 24 Hours podium successes, there has never been a year, including those when the race ran to shorter distances, that a Porsche hasn’t finished on at least one podium.

The two GTD podium finishes for the Weathertech and Wright/ Dempsey 911s then don’t add to the astonishing total of 76 Porsche class wins (40 for 911s) but do consider a world record run of podium success. 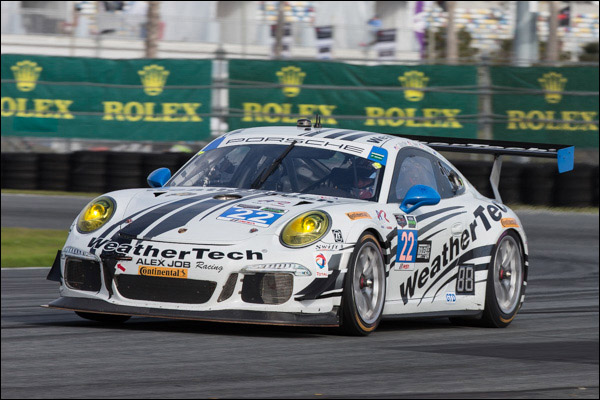 The post race press conferences had a distinctly ‘tabloid’ feel, AP’s Jenna Fryer trying just a little too hard perhaps to develop a theme that Scott Dixon was the star in the winning car, and a couple of other questioners doing more to stretch the patience of the race winners rather than their intellects. Kudos though to the Ganassi winning quartet for their clear and amusing responses to some questions that might best be described as leading!

David Heinemeier Hansson has been busy since the weekend pushing the point that there is a better, safer way to conduct pitstops. He’s even posted a (very well worded) Change.org petition to urge IMSA to adopt 2 major changes. Engine off during the stop, and for Tyres and fuelling not to happen at the same time (to ensure that driver changes and belts are given more time to get right).

This year’s Rolex 24 Hours at Daytona had plenty of drama on track and off, but as an event it was BY FAR a better event than the first round of TUSCC doled out in its inaugural year. Have lessons been learned? We’ll see soon enough as the IMSA crew and their customers embark on this their tricky second album!