In late January, when most professional racing drivers were still enjoying their time off before prepping for the new season in the springtime, Continental Tire SportsCar Challenge competitors were busy pounding around the 5.72-kilometer ‘roval’ at Daytona International Speedway in the first race of the new year.

Although typically overshadowed by the Rolex 24 at Daytona, the BMW Performance 200, which set the mood for a ten-race championship, once again provided great racing, whetting racing fans’ appetites before the twice-around-the-clock odyssey the following day. A large grid of 56 entries is something to get excited about, after all.

Held on a Friday, everything about the opening round in Daytona was unconventional. Just that sort of uniqueness made for a memorable weekend on the high banks of Daytona.

The first practice session of the new CTSC season on Wednesday saw Billy Johnson lead GS, pedaling his #15 Multimatic Motorsports Ford Mustang Boss 302R to a 1:57.559 ahead of the #6 Stevenson Motorsports Camaro Z/28.R in second and the sole Jim Click Racing Mustang in third. In ST, the #18 Rennsport One Porsche Cayman of Jon Miller lead the charge with a 2:05.909, beating out another Cayman in Murillo Racing’s #56 entry, with the #84 BimmerWorld Racing BMW 328i wrapping up the top three.

Times improved in the second session later in the day. Practice 2 saw Lawson Aschenbach, 2014 champion of the Pirelli World Challenge GTS class, drive the #9 Stevenson Motorsports Camaro to a 1:56.943, with the Johnson and Maxwell duo exactly improving to a 1:56.983. Andy Lally was able to reach a 1:57.161 in his #08 Rebel Rock Racing Porsche 911, which he shared with Windermere, Florida native Cameron Lawrence. The top two in ST remained static in Practice 2, this time with Adam Isman taking honors with a 2:05.460. Murillo Racing once again came second while the #23 Burton Racing BMW 328i of Terry Borcheller and Mike LaMarra claimed third.

Attrition marred the two Wednesday sessions; up to ten cars were prematurely parked, and still more didn’t set a time. The most dramatic incident involved the #28 Tim Bell Racing Nissan 370Z, when the car caught fire in the pit lane. Driver and owner Tim Bell was unharmed, but the incident ensured that the car would not be back on track until race day.

Times dropped even further down during Practice 3, Thursday’s only practice session that lead up to two separate qualifying sessions for ST and GS, respectively. Reigning GS champion Trent Hindman paced the field in his #46 Fall-Line Motorsports BMW M3, setting an impressive 1:56.850. Stevenson Motorsports and Multimatic Motorsports once again took spots in the top three, with the the #6 Camaro of Davis and Liddell taking second and the #15 Mustang of Johnson and Maxwell finishing third. Meanwhile, Greg Liefooghe lead ST, putting his #83 Next Level European Porsche Cayman on top with a 2:05.685. The Cayman was trailed by the #84 BimmerWorld entry of Briedis and Clay in second; the #56 Murillo Racing BMW placed third.

Scott Maxwell claimed GS pole on Thursday with a 1:56.520, a time that would stand as fastest all weekend. Sharing his #15 Multimatic Motorsports Ford Mustang Boss 302R with Billy Johnson, Maxwell set a time good enough to beat a hard-charging #13 Rum Bum Racing Porsche 997 of Hugh and Matt Plumb. Andrew Davis and Robin Liddell rounded out the top three in their #6 Stevenson Motorsports Camaro. 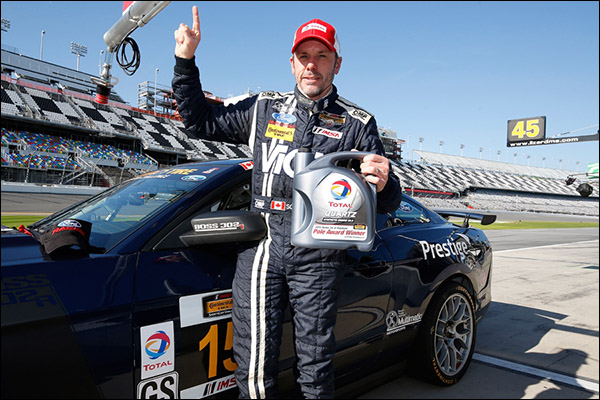 In ST, Justin Piscitell took honors courtesy of a 2:05.454, sharing his #56 Murillo Racing BMW 328i with Eric Foss. The first place marked the team’s second consecutive pole at Daytona in the CTSC. Murillo Racing mainstay Jeff Mosing was not available for the opening weekend of competition as his wife was due. As such, Piscitell was called up by the team, and managed to pull off the same feat as Mosing did in 2014. The #84 BimmerWorld BMW 328i was good enough for second while Rennsport One’s Porsche Cayman of Miller and Isman took third. 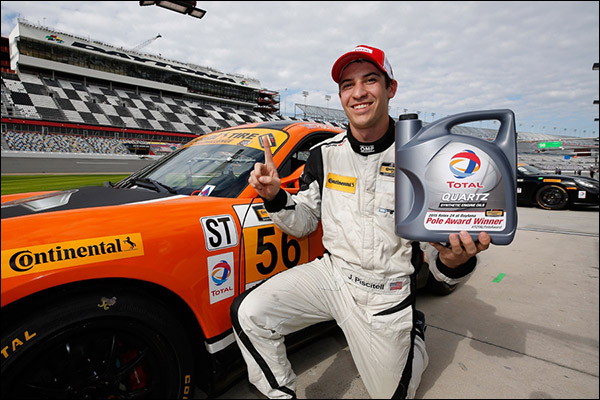 Bouncing back from a difficult 2014, Matt and Hugh Plumb took an emphatic victory in GS and overall in the season-opening BMW Performance 200. 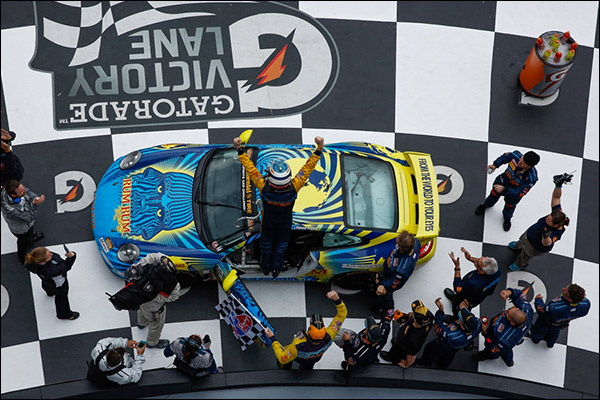 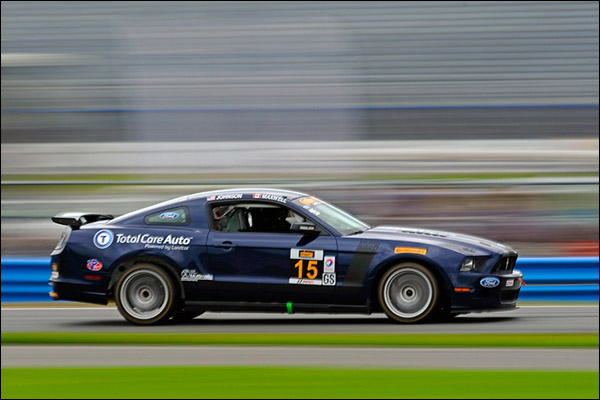 The battle raged on until green flag pit stops shuffled the order, with both Maxwell and Plumb pitting, handing over the driving duties to teammates Billy Johnson and Matt Plumb, respectively. Johnson would have his work cut out for him later; missing a call to pit after recycling the ECU, Johnson would fight his way back up through the pack to an eventual fifth place, still not quite representative of the pace of the car. 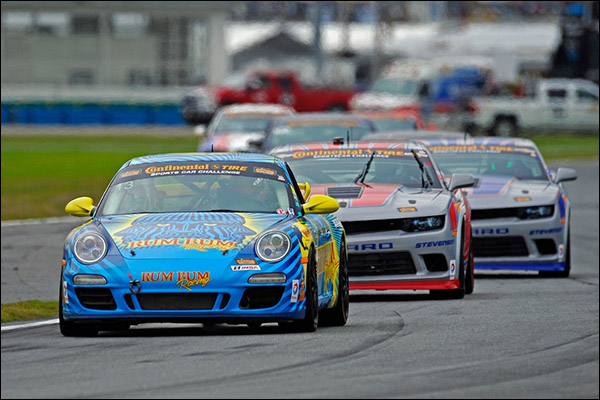 After the third and final caution, Mike McGovern found himself in the lead of the race with the Plumb on his bumper. 20 minutes later, Plumb sprung a pass on the #2 Jim Click Racing Ford Mustang Boss 302R going down into Turn 1.

McGovern would have to pit for fuel with only 20 agonizing minutes left in the race. Plumb was able to cruise to victory, finally getting even with Daytona after suffering a heartbreaking mechanical problem and retiring from the lead exactly one year ago.

“Last year we had a sensor on the motor go bad, and believe it or not, I thought I felt the same bobble today with ten laps to go,” Plumb said. “I started to freak out. It’s amazing how things start to feel when you’re going to win.”

Stevenson Motorsports was able to lock out second and third place, the #9 Camaro only 6.9 seconds behind the race-winning Porsche. The #6 sister car finished third under the control of Aschenbach and Bell.

A promising race ultimately ended in a disappointing fifth for Jim Click Racing.

“Racing with Mr. Plumb was awesome, we had a great battle,” McGovern said. “But 20 minutes before the end she sputtered and I had to pit. We were done at that point. But today just shows what you can do when you get the right race car and the right team, you can make it happen. It’s amazing but disappointing. I’m happy we could show people today we could make it happen. Typically, we have more cautions, but not enough today.”

Spencer Pumpelly and Luis Rodriguez, Jr. were able to take the #17 Rennsport One Porsche Cayman to the win in ST. 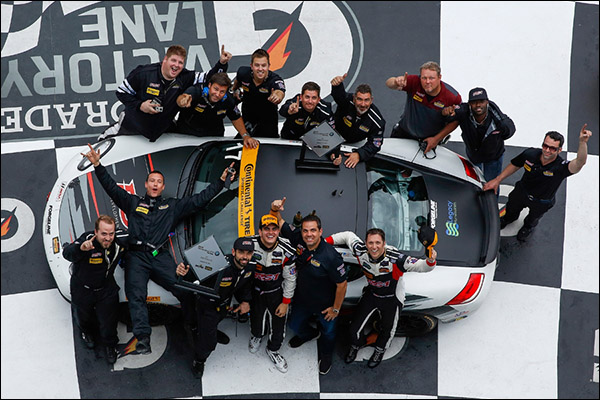 Indeed, the race seemed to be all about Justin Bellinzoni’s team, which was nearly able to take second as well. Jon Miller was able to take the lead from the polesitting Justin Piscitell on lap six. 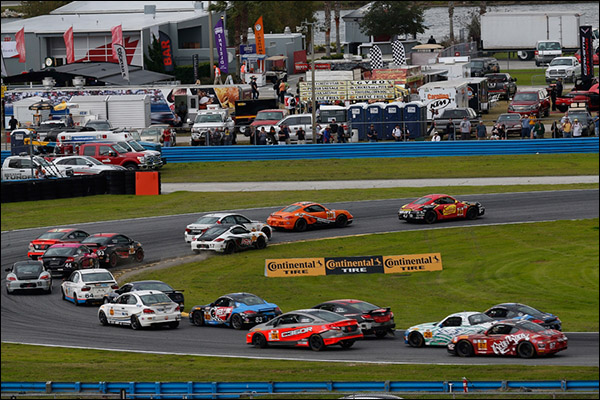 The race would be lead by Miller until the first round of pitstops, when Rennsport teammate Spencer Pumpelly and several others leapfrogged the #18 Porsche. 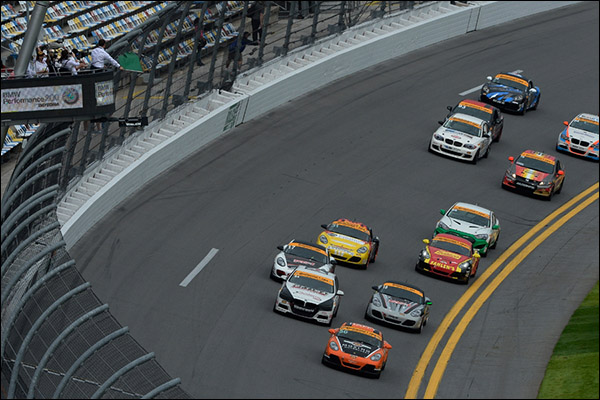 Eric Foss held the lead in his Murillo Racing BMW 328i until Pumpelly passed him in NASCAR Turn 2 with 19 minutes to go. Pumpelly’s teammate Adam Isman, the young Canadian who took over the #18 Porsche from Miller, shortly followed suit. Pumpelly would you go on to win the race, while Isman would run out of fuel and have to coast to the finish line, finishing a hard-to-stomach tenth.

“What was shaping up to be an incredible finish unfortunately turned out to be a fuel mileage race,” Pumpelly said. “We’ll take the win. This is a great new team. Luis did a phenomenal job today. This was a pretty high pressure race for him. He’s got a great future ahead of him.”

The second round of the Continental Tire SportsCar Challenge will be held at Sebring International Raceway in conjunction with the TUDOR Championship’s 12-hour endurance classic. The race will take place on March 20 as Daytona victors Rum Bum Racing will face off against reigning Sebring winners Stevenson Motorsports.