The numbers for the 2015 ELMS championship are down to 34 cars for the season this year, but it’s still a healthy grid, with a very high quality list of teams and drivers set to compete in the series. The key points being the addition of the cost-capped LMP3 class making its debut, and a smaller GTC class this time round. 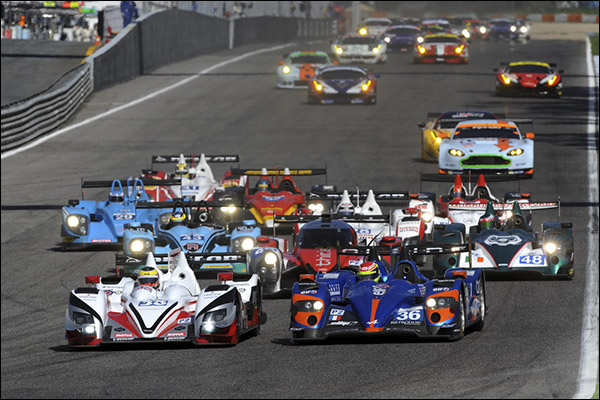 This season’s ELMS LMP2 class oozes with quality teams. Last season’s champions – Signatech Alpine – have made the move over to the FIA WEC for this season, so we will get a new champion.

In terms of new chassis, the upgraded Zytek – now branded as Gibson – will make up two of the cars and the new season with Jota Sport and Greaves Motorsport. The SMP Racing squad have moved to the ELMS from the WEC to debut two new BR01s and Thiriet by TDS Racing have entered a new Oreca 05 Nissan engined coupe.

Other new entries come from Ibanez Racing, who have entered two ex Millennium Racing Orecas, Krohn Racing have stepped up to the P2 ranks with a Ligier and Algarve Pro Racing have also entered a JS P2, this the ex TDS Racing car.

Making up the remaining entries are series stalwarts Murphy Prototypes with their Oreca 03R and the new Eurasia Motorsport team also competing with an 03R.

The LMP3 class clearly has a very healthy list of teams for its first season in the ELMS. All seven cars – five of which are entered by British teams – will run with a Ginetta chassis and the spec Nissan engine, so it should provide us with some entertaining close racing during the season. Michelin are confirmed as the spec the supplier.

Martin Short is back with Rollcentre Racing, and is currently listed as the driver, though has made it clear he is unlikely to contest a full season in the driving seat. LNT also bring two cars to the mix with Sir Chris Hoy headlining one of their entries after a successful first season in the British GT last season with RJN. His step up to the prototype ranks will be certainly something to keep an eye on as he works on his dream of driving at Le Mans.

It’s also going to be intriguing to see what the Team RLR/ University of Bolton can do with their car. It’s not the first time a University has tackled an ACO series with a team, many will remember the valiant effort from the Tokai University team, who competed with a Courage LC70 at various points during the last decade. The real racing support though will come from the RLR end of the partnership, a team with LMP2 race experience with both Lola and Oreca chassis, RLR handled the first year of competition for Murphy Prototypes.

Nine Ginettas have been sold, yet only seven are entered. Second cars from Greaves Motorsport and SVK by Speed Factory are nowhere to be found.

GTE is set to include a solid nine cars for the whole season, with a new marque entering the fray, and one missing from last season.

The biggest news for this class is the addition of the Marc VDS BMW, who are bringing a GTE-spec BMW back to Europe to compete for the first time since 2011, and with two time WTCC champion Andy Priaulx behind the wheel, the team will have high hopes of winning the class title.

Gulf Racing have stepped up to the FIA WEC with their Aston Martin this season but still run a Porsche with Michael Wainwright listed as the driver, Adam Carroll confirmed as returning joined by team new boy James Winslow . Proton Competition are also bringing a Porsche to the table once again with Christian Reid driving.

Making up the rest of the class are AF Corse, JMW, AT Racing and Formula Racing, who bring a total of six Ferrari 458s. Last year it was definitely the car to have, finishing at the head of the field at every round.

SMP Racing after winning the class last year have opted to focus solely on their LMP2 project.

GTC has taken the biggest hit in terms of numbers after last season which saw 16 cars compete in the series. It is a surprise to see such drop off, considering the current strength of GT3 racing across the world these days.

AF Corse look to be using the strength in numbers strategy to take the championship initiative, with four 458s set to take on the class. Aside from that TDS Racing enter a BMW Z4 with Eric Dermont and Massive Motorsport have Casper Elgaard onboard for their campaign in the Danish-run GT3 Aston which has also been confirmed as featuring 2014 FIA WEC LM GTE AM Champ Kristian Poulsen

In-depth analysis of the ELMS entry list will be available on DSC in the coming days.