Jim Glickenhaus will have company this year as he and the Scuderia Glickenhaus team contests some of the world’s most heralded Pro-Am endurance events as a two-car effort. And if current discussions with at least one professional sanctioning body come to fruition, his brand-new SCG003 chassis could be seen at an even bigger venue in 2016.

With a sharp eye for personalized automotive designs, Glickenhaus (below left) built a loyal group of followers in the racing world after his Ferrari-based P4/5 Competizione made its debut at the Nurburgring 24 Hours in 2011. His next project moved the bar from modifying an existing chassis to commissioning a clean sheet design, the SCG003, that broke cover last year. 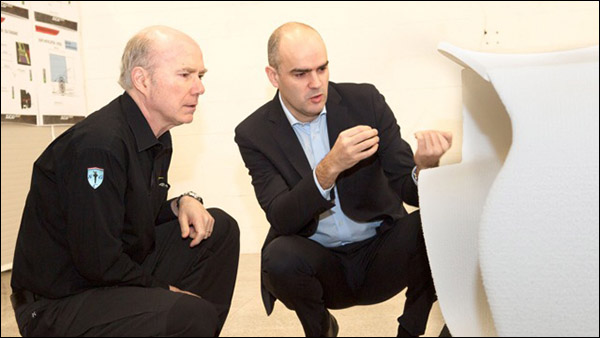 The concept for the SCG003 conforms to an old design ethos where owners could drive their machines to the circuit, compete, and return home in the same vehicle.

“The journey started for me when I moved from collecting pieces of history, to using them and then thinking about what elements in them worked or didn’t work when it came to driving,” Glickenhaus told Marshall Pruett. “How do you turn a road car into a racecar?

“In the 1960s, you could buy a Triumph or a Cobra, take it to the track, tape over the headlights, race it, then go home and drive it to work the next morning. That era of racing always fascinated me, and particularly the Ford vs. Ferrari wars where they used prototypes that didn’t necessarily have the numbers produced to be homologated.”

Glickenhaus broke new ground with the P4/5, and from that extensive transformation, a more ambitious plan was slowly hatched. 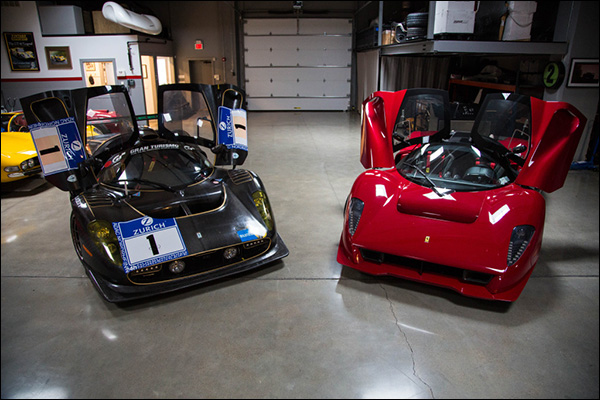 “We moved onto the project with Pininfarina where they took my Ferrari Enzo and made the P4/5, and in that process, we got into a lot of engineering,” he added. “There were a lot of things I didn’t like about the Enzo’s handling, and once we worked through all those solutions, the next step, the next car, really stood out as a project to consider from the ground up. It took some time, but that eventually led us to the SCG003.”

SCG would need to make the giant leap into the realm of sports car constructors, and began evaluating their options to produce an original design. The road version of the P4/5 was followed by the P4/5 Competizione using a Ferrari F430 Scuderia chassis and the running gear from its GT2 counterpart. Glickenhaus enjoyed using base ingredients from other manufacturers and adding his touches. The idea to move away from that process, as he explains, took more time to solidify.

“The Nurburgring race was very revealing to us; the [P4/5C] chassis was cracking, the suspension was cracking, and overall, the Ferrari parts beneath the body weren’t up to the task,” he explained. “I also saw Ferrari were making the La Ferrari; Porsche was making the 918, and these hypercars were becoming very popular. We’d gone back to the ‘Ring with the [P4/5C] with a hybrid system from Magneti Marelli, felt like we were in a good place after winning our class, and then I went to McLaren to ask about creating a car. They said, ‘Yeah, that’s great, bring us $10 million and we can make you one.’ I said, ‘No, I don’t want to race with you, I want to race against you and your P1s.’ Ferrari and Porsche and all the others told me the same thing, so I thought the only thing to do was to go back to the basics.”

Glickenhaus gave his program manager Paolo Garella a quick brief of what he was looking for after the P4/5C project ran its course. One more attempt at working with an auto manufacturer was also made before SCG committed to going solo.

“I told Paolo the last thing I wanted was something like the Bugatti or the Koenigsegg that had 1,000hp and weighed 4,000 pounds,” he explained. “I didn’t want some behemoth that required excessive power to make up for its extreme weight. I wanted a more basic design; lightweight, reasonable horsepower, not a lot of electronics – a great little sports car that we can use as a racecar. We tried to look at other partnerships.

“I said what about an Alfa Romeo 4C chassis with a twin-turbo Maserati V6 in it with a nice body, and the chairman of Maserati said they’d had the same idea, supported it, and it made the rounds to FIAT and Ferrari. It was shut down by Ferrari eventually. Paolo finally said, ‘Let’s just become a manufacturer.’”

A visit to a familiar carbon fiber chassis constructor pointed Glickenhaus in another fascinating direction.

“We went to HP, they’re the Italian chassis maker known as ATR that have done chassis for everyone from Audi to Ferrari,” he said. “The new owner of the new company said they’d make us a chassis for the same price as a 4C, so I said yes, and they also recommended a designer to me, another Paolo.” 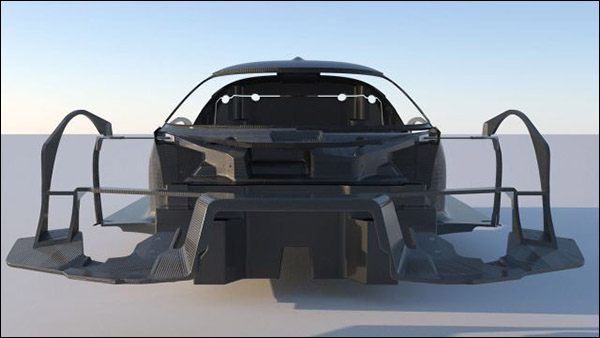 SCG then recruited Paolo Catone, whose Peugeot 908 HDI FAP won the 24 Hours of Le Mans in 2009. Before long, he was crafting a carbon fiber chassis to house a twin-turbo V6. The SCG003 would be a GT car in name, but a prototype in spirit and form. Glickenhaus also brought in one of the designers from Pininfarina, and from there, the project took off.

“We came up with four designs; they were all beautiful, all very Italian, but it was a GT design, and those designs all start with the need to fit two 300-pound guys in the car so they can drive to dinner,” he said with a laugh. “Paolo said that the GT racing rules are very different and allow you to build a smaller cockpit. His input was to start with a car that was working from the rules of racing, rather than make a normal GT car that goes racing with all those aerodynamic compromises. That influenced the height of the car. We lowered the height by about three inches, added a fin, and made it very LMP-like.”

Sourcing an engine was next, and while Glickenhaus prefers to keep its source private, other reports have suggested it hails from a Japanese manufacturer with recent prototype experience. With the chassis, engine, and aerodynamics in place, the first SCG003 chassis began testing late in 2014. Inevitable new-car issues were experienced, most notably in the engine management system, but those have largely been resolved.

The first chassis made enough early progress that in January, SCG sold its first customer 003, chassis number two, to noted businessman and Ferrari racer Christopher Ruud. Glickenhaus and his client have started preparations to campaign chassis one and two throughout Europe on a hearty Pro-Am invitational tour.

“Theoretically, the car is built to GTE-legal standards, but it is not homologated,” he said. “Well, the ’Ring has let us race; we’ve gotten calls from about 12 other tracks; the 24 Hours of Dubai wants us to bring the SCG003; Bathurst wants us there; the 12 hours of Imola… We are negotiating with Stephane Ratel and no promises, we both want us there for the 24 Hours of Spa.” 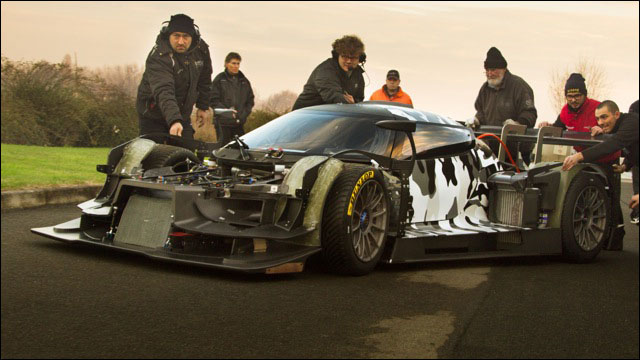 Glickenhaus expressed his desire to race the SCG003 at Le Mans when the car was launched, and while that initiative could take a few years to incubate, he hopes to use the team’s racing endeavors in 2015 as a roadmap to bigger things.

“We want to race the 24 Hours of Daytona, and we’re already speaking with Jim France about it,” he said. “Our fans just want to see us run, get excited and have a good time. We had over one million visitors to our Facebook page when we raced at the ’Ring, and they want to see us do more with the new car.” 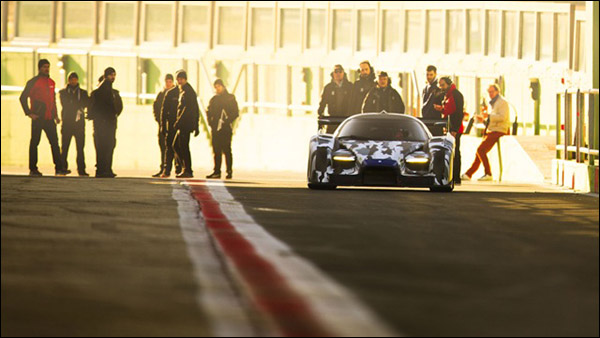 Next up for SCG is a test at the Aragon circuit in Spain, and they will also conduct official tire testing with Dunlop. Aragon should see the debut of SCG’s newest driver, Marino Franchitti, who signed with the team this week. He’ll partner with Glickenhaus, and fellow TUDOR Championship race-winning driver Jeff Westphal has signed to drive the second SCG003 with Ruud. Thus the Scuderia has rapidly transformed from a small band of outsiders to an emerging program packed with impressive ammunition.

With a clear goal toward graduating to pro racing next year, Glickenhaus closed the conversation with a glimpse into SCG’s upcoming public debut at the Geneva Auto Show on March 5. 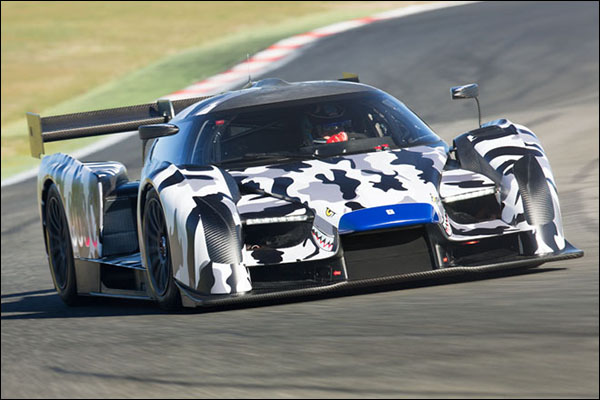 “Our immediate plan is to go to Geneva and offer SCG003 as a car to buy so they can join us and race it,” he stated. “I think as people see where we’re trying to go with the car and what we designed it to accomplish, you’ll see more of them coming along for the journey.”