Top team MRS GT-Racing are set to field a two car team of brand new 2015 spec Nissan GT-Rs Nismo GT3s in a full season campaign in ADAC GT Masters, with the cars currently in build in the UK at JRM Group. 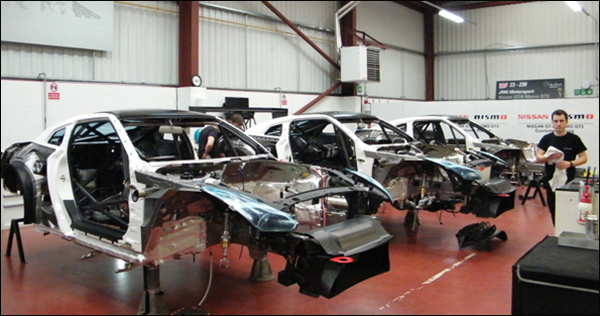 The effort will run one car with an all professional driver line-up where the drivers selected for the effort will do battle with some of the very best GT racers in the world. The second car will be made available to MRS GT-Racing customer drivers.

Karsten Molitor: ”The ADAC GT Masters is one of the strongest contested GT3 racing series in Europe; here you can just exist when you are on a par with the professional teams. In cooperation and with the support of Nissan Germany and JRM Group we found conditions that enable a competitive participation. Already now we are very comfortable with the Nissan family, the last success of the GT-R GT3, the victory at the 12 hours race in Bathurst, Australia, showed that the Nissan is one of the fastest GT3 cars.”

2013 Nissan GT Academy winner Florian Strauss is confirmed as a full season driver for the team, the announcement coming hot on the heels of his overall win in a 2014 spec GT-R at the challenging Bathurst 12 Hours in Australia.

This is not just though a simple matter of a professional racing team buying new cars – The effort sees backing coming from Nissan Germany and the hugely successful Nissan GT Academy involved in the supply of drivers for the programme. JRM will work closely with MRS as a development partner for the Nissan GT-R NISMO GT3 and will provide factory engineers and parts support on-event.

Off track the programme is set to see a unique tie in with local and regional Nissan dealers at every round, supporting the effort with PR and customer activities at the tracks, and in the lead up to the race weekends.

The programme is initially slated to last for three years with plans already under discussion for other exciting progress in the German market for future years.

“It’s great to have gained such positive support not only from MRS GT-Racing, one of Germany’s top GT racing teams, but also from Nissan Germany and the GT Academy.

‘Their support will be the key to taking this programme’s success from track to showroom, showing that current and future road car customers can buy in to racing success, building the Nissan and Nismo brands even further in a key European marketplace.”