Nathan Antunes has taken early control of the 2015 Australian GT Championship presented by Pirelli after taking two race wins and a podium in the Swirk Audi R8 Ultra. 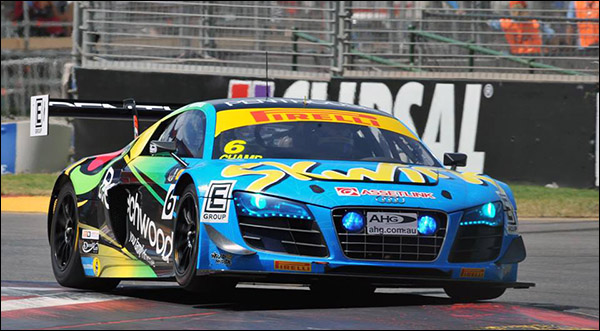 It was a weekend where pitstop times and safety cars affected the result with a number of cars suffering heavy damage on the Adelaide street circuit.

Race 1 was a 30 minute affair with a compulsory pitstop. The race was just for one driver with most teams running their quicker driver.

Like last year, the Australian GT Championship implemented a mandatory pitstop time – the higher you qualify, the longer your pitstop and if there is a professional driver in the car, the longer the pitstop. The pitstop window would open after 10 minutes into the 30 minute races or 20 minutes in the one hour race.

After qualifying on pole, and with a ‘Pro’ driver seeding, Jono Lester in the Trass Family Ferrari would have the longest pitstop.

Lester led from the start, holding off Dean Canto in the Aston Martin Vantage GT3 and Nathan Antunes in the Audi.

The fight would last until just before half distance when Morgan Haber in the Erebus Mercedes clipped the inside curb at the fast turn 8, slamming into the outside wall, heavily damaging the SLS GT3, bringing out the safety car.

The ensuring confusion and pitstop cycle saw Lester drop to 32nd, Canto retire with a mechanical issue and Antunes dropped to fifth.

Max Twigg in the other Erebus Mercedes and Marcus Marshall’s Porsche were in the lead but Antunes was on fire and would battle to the front, fighting with Marshall, taking the lead with an audacious move on the second to last lap.

Antunes would take the win from Marshall, with Peter Fitzgerald taking third. Twigg would fall to eighth having been swamped by the field on the closing laps.

Lester’s fightback though was the stuff of legend, overtaking 27 cars on track in just 15 minutes of racing and was elevated to fourth when Barton Mawer was given a 10 second post race penalty.

“It is one of the perils and one of the beauties of the Australian GT Championship… is that each car has a CPS (Compulsory Pit Stop),” Lester said after the first race.

“We had a really great start, pulled a nice lead, four or five seconds over Dean [Canto] and we had the safety car and we missed the pit entry window by two seconds. Everyone behind me fired into the pits to do their pitstop and I had do a lap behind the safety car.

“I don’t think it hurt us too bad but it didn’t help. I came out in 32nd I think and fought up to fifth by the end,” continued Lester.

Despite the 10 second penalty for Mawer it wasn’t all bad. He took the who took the Trophy class win, unaffected by the penalty. Richard Gartner in a Porsche took out the Challenge Class win, giving Wall Racing both the Trophy and Challenge class wins.

Race 2 was held on Saturday afternoon with a one hour race being held into twilight. Like race one, there was a compulsory pitstop but driver changes would occur where cars had two drivers.

Gear selection dramas would keep Marshall/James Koundouris out of the race. The Camaros also had their issues with Justin McMillan/Tomas Enge car failing to start and the Dale Paterson/Steve Richards entry only completing six laps.

For those that did start the pitstop time and tactics would be a key feature.

The pitstops could last for more than 100 seconds, in fact a 114 second pit stop was long enough for Lester and Paul Kelly to take a selfie in pit lane while they did their driver change. The time however makes it safe for the quickest stops, i.e. the slower drivers to complete their driver changes. 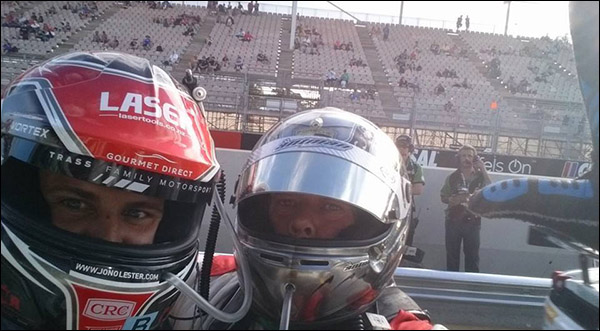 It would be important to give the faster driver maximum track time while not losing track position or falling victim to a safety car period.

The race became a dual between Antunes and Christopher Mies. It was a close fight but the duo came upon a gaggle of backmarkers just before the half distance mark. The ensuring chaos saw contact between the cars, with Kevin Weeks being eliminated in the Ford.

Antunes also suffered a puncture but an immediate pitstop and tyre change ensured that his race wasn’t compromised.

There was drama with just 10 minutes to go with leader Antunes having to serve a driver through penalty for his part in the earlier crash. He lost a comfortable and and came out in second – having to make up seven seconds to Steven McLaughlan’s leading Audi.

Antunes was putting in times faster than his qualifying pace and the pressure he forced upon McLaughlan forced him into a mistake, spinning at turn four with just three minutes left to race. This dropped the #75 car down to seventh.

Antunes would hold on, taking the win from the Tony and Klark Quinn in their McLaren MP4/12C and Lester/Kelly in their Ferrari.

Lester had to fightback through the field once again, fighting past Peter Fitzgerald’s Audi and Tony Walls McLaren 650S in the final stages for the final podium spot.

Antunes was elated with his performance.

“It was a very exciting race. The start was clean and I had a clean first dozen laps and then when people started coming into the pits it got a bit hectic in the back markers,” Antunes said after the race.

“It was then that I got a puncture and I was fortunate enough to keep my nose clean after the pit stops.

“The Swirk Beechwood Audi has given me the goods again and I am over the moon.”

Race three, was a 30 minute race. Like race one, it was a one driver affair, giving the co-drivers their chance to race.

It was carnage with a heavy crash eliminating Paul Kelly in the #27 Trass Family Porsche, Tony Walls McLaren, Peter Fitzgerald’s Audi, Steven Johnson’s Audi, Michael Hovey’s Ginetta, James Winslow’s Porsche and Simon Ellingham’s Porsche. It was a disaster for McElrea Racing whose three cars were involved in the crash.

Kelly was taken to hospital after the crash for observation.

The ensuring safety car and pit stop cycle saw a very mixed up field. Antunes was down in 16th, Tony Quinn was down in ninth.

Richard Gartner was in the lead with Theo Koundouris in second.

Quinn and Antunes would fight back with Quinn taking the lead on the final lap, with a late breaking move into turn nine. Koundouris would let him through, knowing he would maintain the Trophy Class win. 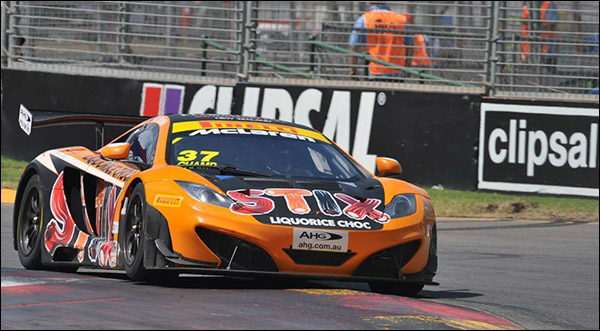 Antunes would take Greg Taylor on the final lap to grab a podium, Taylor like Koundouris was fighting for Trophy class points and didn’t want to put his result in jeopardy.

“It was an interesting. The front runners got a good jump on the start carrying the pace where I sat back to the left and watched what unfolded. I was able to get through on the left and found myself in fourth spot,” Taylor said after race three.

“There was a lot of mayhem in the race but we were able to capitalise.”

Richard Gartner would make it three from three in the Challenge Class.

Overall there were about four laps of racing in the final race, with most of the 30 minute race being run behind safety car.

This made it difficult for the professional drivers. Christopher Mies who was racing the #74 Jamac Pem Audi took to Twitter to vent his frustration claiming that “Making it hard for a pro to win is alright, but making it impossible with crazy pitstop penalties isn’t right @AustralianGT” 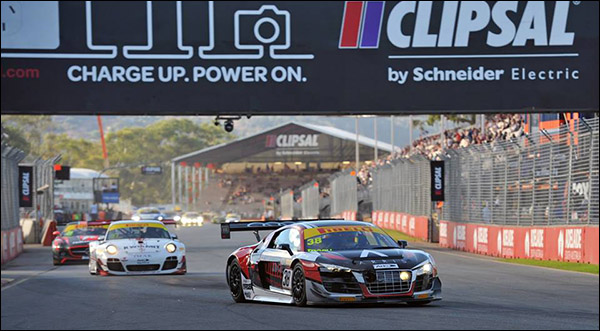 The pitstop times certainly made it difficult for both Mies and Lester to win in the 30 minute races but the rule exists as a form of Balance of Performance in a series that professes to be a series for privateer drivers aimed at the ‘gentleman’ driver.