In sporting terms there were of course two major highlights for DSC at Audi Sport’s Neuberg HQ today. The first chance to get up close and personal with the 2015 evolution of the Audi R18 e-tron Quattro and an opportunity to find out more about the plans for Audi’s new for 2015 Audi R8 LMS.

First up the LMP1 car and with the #7 car on track for it’s shakedown. “Honestly we are not putting it out there because you are here, this is its programmed roll out” there was the opportunity to hear LMP Programme Chief Chris Reinke and Audi Sport’s new Head of Technology Jorg Zander explain the myriad of changes for the 2015 FIA WEC weapon. 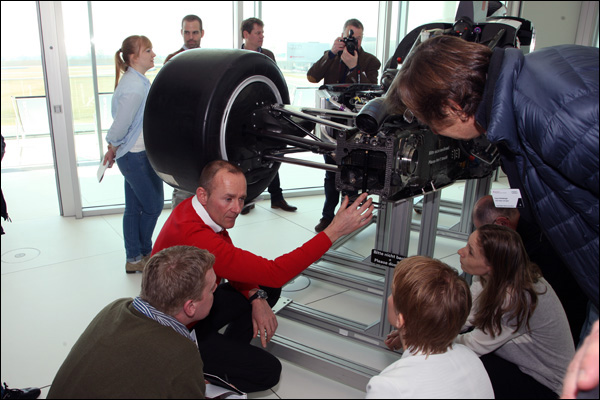 First of all there are lots of similarities with the 2014 car, the basic chassis is the same (though mildly modified) engine architecture is the same (4 litre V6 Turbodiesel) though enhanced (>558 PS and >850 Nm of torque) and the hybrid system is basically the same though uprated to bring the R18 into the 4Mj sub-category.

There will be three new monocoques for Le Mans with all other cars (the early season WEC cars and any potential replacements needed later in the season), set to be built around existing 2014 chassis.

There are though major changes to the aero and bodywork, aero efficiency is the key with Audi knowing full well that it needs to attend to a distinct disadvantage in top speed after being blown away at times late last season by the Toyotas and Porsches.

One important part of the aerodynamic approach for the 2015 car has been to move back bodywork as far as possible from the front of the car giving the front aerofoil as clean a profile as possible. 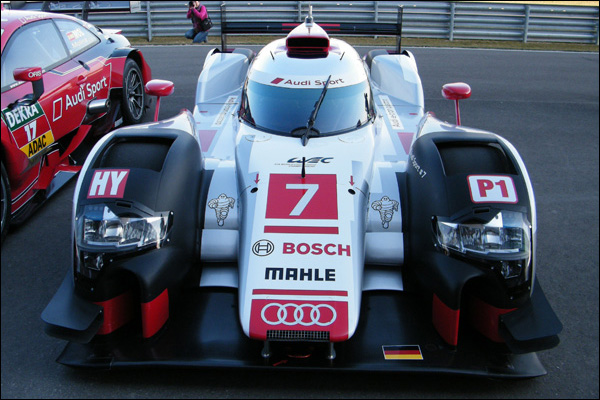 Efficiency is the key with much of the 2015 effort focused on flow quality through and over the car to the rear. Huge attention to detail then has been paid to managing the airflow behind the front wheels, in particular to reduce the effects of the ‘dirty’ air spilling from the turning wheels. That too is the main purpose for the new large ducts sited beneath the (revised) light clusters, a peripheral brake cooling function is only part of the story here!

Cooling is also much improved, another perceived weakness (in relative terms) of the 2014 car.

The car has required a new crash test as a result of the changes to the front end.

There are other potentially important changes under the skin too – the basic suspension set-up is still double wishbones with pullrod at the rear and pushrod at the front.

The 2015 car though includes an “Optional Linked Suspension System” designed to keep the car flat as much as possible. The system, dubbed FRIC (Front and Rear Interconnected suspension) when adopted in Formula One could provide an edge at some tracks, and has the benefit of being able to be disconnected where it doesn’t!

Is all of this enhancement going to make the difference with their main opposition looking set to announce 8mJ powertrains next week? All we can say right now is that there was no shortage of optimism on display at Neuberg today!