It was instantly clear after sitting down with Devon Modell during the Blancpain test at Paul Ricard that the guys at Ecurie Ecosee have got a real gem in their line-up for this year’s Blancpain Endurance Series season.

At just 24-years-old, Modell is still at the tip of the iceberg in his career, but has already risen through the GT ranks extremely quickly, picking up some serious silverware in the process. Remarkably, since the start of the 2013 season he’s gone from competing in the Clip Cup to driving more throaty machinery like Aston Martin GT4s and Mercedes SLS GT3s each weekend. 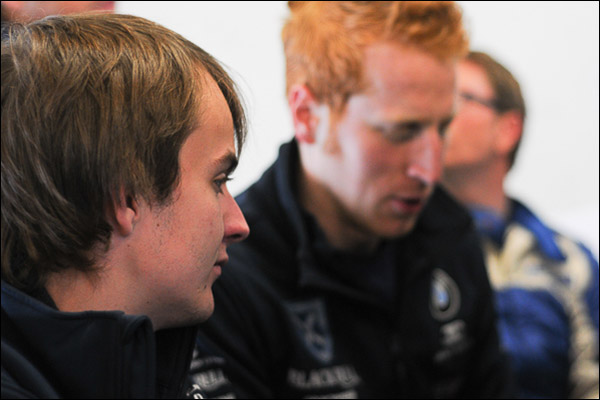 After spending 2014 focusing mainly on his exploits with TF Sport in the British GT, this year he’s taking on his first full season in GT3 racing. Driving for Ecurie Ecosse in their BMW Z4 in the hotly contested Blancpain Endurance Series Pro-Am category should give him an immediate shot to compete for the class title. Modell continues to progress, and this year will be as big of a step as any he’s taken so far. And despite climbing up the ladder via GT4, it’s not as easy of a transition as one may think.

GT3 and GT4 cars are very different, in speed, aero, power, size and series they’re sanctioned in. So even after some brief experience in the GT3 ranks last year with the hugely successful Black Falcon Motorsport team at the Blancpain Endurance Series finale at the Nürburgring, he’ll admit that there’s still a lot to learn. 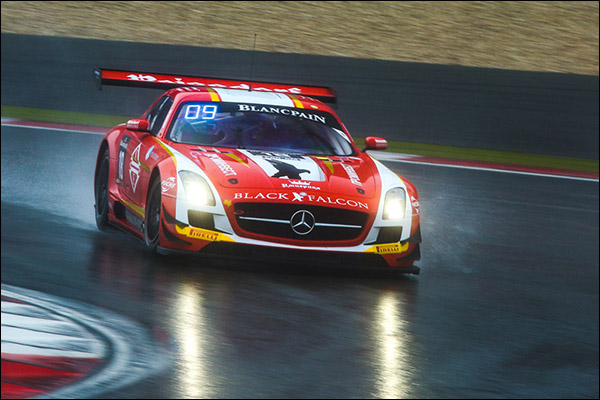 ‘It’s a good stepping stone in the quality of the racing and regulations, and the fact that you can make a mistake in a GT4 car and it not be quite as expensive as in a GT3 car,’ Modell told DSC. ‘But GT4 isn’t a good stepping stone in some ways, in that you have to deal with the GT3s going past you, and you get stick for not moving out the way, even when you don’t really have to. There’s also no aero, at least on the Aston, there was just nothing!

‘That’s the biggest difference stepping into GT3,’ he continued. ‘It’s the amount of physical aero on the car. The power increase is the same like it is in most parts of the sport, but the physical feeling of the cars, the grip, it’s worlds apart.

‘The Aston is a big and heavy car with a lot of power, so it takes a lot to stop it. But with GT3, you’ve got better brakes and the aero to help. As a car to drive, GT3s are much easier. I will say though, that at first it’s harder because you have to commit to it,’ explains Modell. ‘If you go into a corner 10mph too slow, you’ve got no grip. You’ve got to get the car planted into corners, getting that into your head is tough. Genuine Gentlemen drivers struggle, because you have to push, you have to go faster. You have to go into every corner stupidly fast and see what happens! You have to go beyond the limit to learn these cars.’ 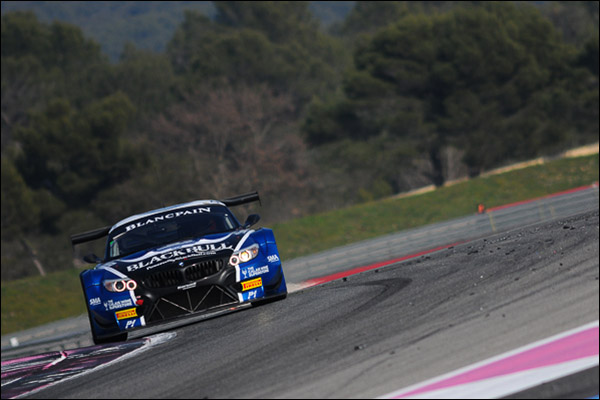 Last season in the British GT, Modell drove for TF Sport in their GT4 Aston Martin with Andrew Jarman, and managed to finish second overall in the driver’s championship standings after a mightily successful year. Only the Beechdean AMR team finished ahead of them. What’s most impressive though, is that aside from being new to the series, Modell managed to put in so many good performances despite various struggles throughout the year with the series’ Balance of Performance. 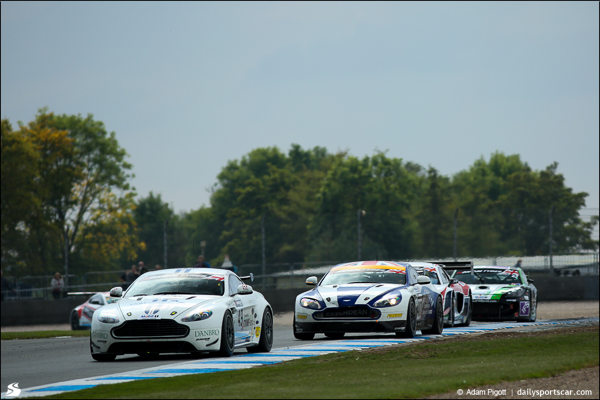 ‘I just don’t think the BoP in GT4 is done particularly well. We didn’t have the quickest car at any round last year,’ admitted Modell. ‘The BoP went in the Aston’s favour throughout the year, but I don’t think it was enough, yes it was quick in a straight line but the handling through corners…. I mean, at Silverstone for the three hours, there were points where we were couple of seconds off the pace.

‘At Spa too, the Lotus was not BoP’d properly at all. I mean, it was driven cleverly by the Pro, by being only a couple of tenths quicker in the qualifying, but by the race when he had time to make up, he was three seconds quicker than us and the Beechdean Aston. I think he made up a 30 second gap in less than a half an hour long stint, It just shouldn’t happen when all the quickest drivers are in the cars. 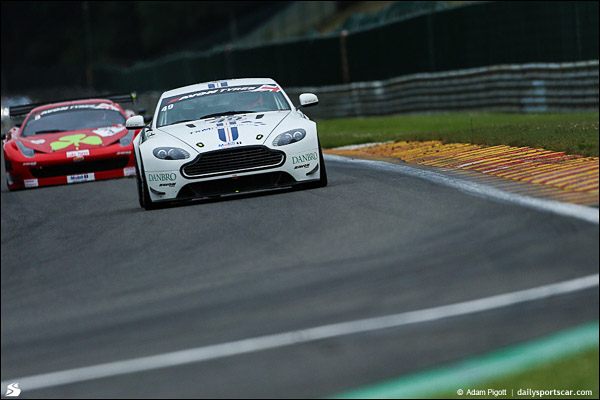 ‘So it was a little frustrating from that point of view, but if you were in the Lotus for instance, you’d do the same thing. It’s BoP that makes and breaks championships now, more so than staying out of trouble.’

BoP is ever the hot topic in the Blancpain Endurance Series also, although not quite to the same extent. Without GT4 cars on the bill, it means Modell will have to adapt to racing in amongst GT3 grids that often be 50-60 cars strong. That coupled with races that are all at least three hours long, means traffic will still be a factor. Everyone’s running to the same class of cars though, so it does present a different challenge and driving style.

‘You have to change your driving style in Blancpain,’ explains Modell. ‘Because it’s all GT3s, it’s all for position, you’re not having to look in your mirrors for a car that’s 10 seconds a lap faster than you, you’re not having to worry about using the GT3s to your advantage when you’re in your own battle and they come past. It’s almost a level playing field, so the cars are all within a second of each other if the BoP is done well. Then it’s down to driving, tracks, and learning where your car is good and where it isn’t.

‘The BMW is great through medium speed corners, but not so good in a straight line. I think we lost a second to the Nissan in sector two at Paul Ricard which is basically just the Mistral Straight. There’s still a difference between the different chassis.’ 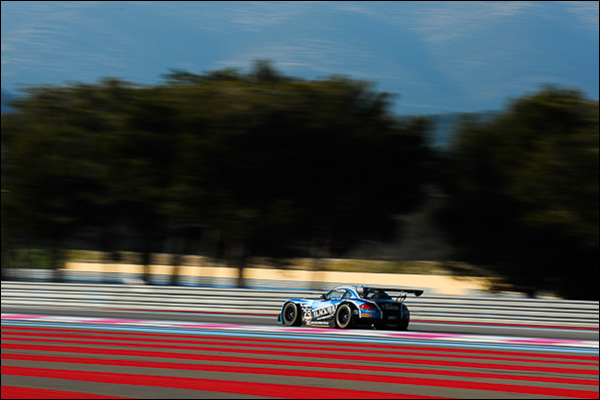 ‘Now I’m a GT3 driver though, it’s brilliant not having GT4 cars on the same track. I understand the frustrations people have when there’s more than one class on the grid now I’ve seen both sides. If you go to Le Mans, you’ve got P1 and GTE cars for instance – I would dread to think what the difference in pace would be between them at some circuits!’ He chuckled.

That’s not to sat that he will be without multi-class racing this season, as he’s already tackled Bathurst, scoring a class podium at the notoriously difficult 12 Hours. He’ll also continue to run the full 24 Hour Series organised by Creventic, which so far has seen him on the podium in his class at the Dubai 24 Hours and Mugello 12 Hours. With regulations much like those in the VLN; having GT and Touring Cars competing on the same circuit is by no means a piece of cake. Nevertheless, he’s got enough experience in that sort of environment now to feel right at home.

‘In the 24 Hour Series we have GT3 cars and then a Suzuki Swift at Dubai, and that got lapped after two or three laps. The pace difference is just massive in some championships. From that point of view GT4 has been good step for me because it forces you become aware of the other cars in the race. 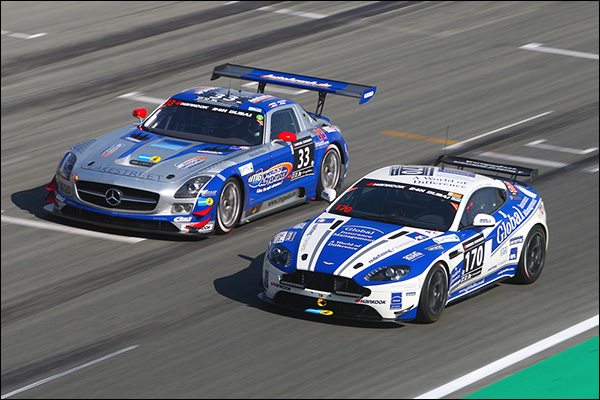 ‘And Bathurst, well that’s totally different. The temperatures are the biggest problem. Even at Dubai we didn’t have to worry about the engine temps, but you go to Bathurst, and you have to manage temps and tyres, and therefore not necessarily drive as fast as you can all the time. It’s not even the traffic that’s the biggest issue there, it’s that the cars just don’t like it, so everyone struggles. After watching the Nissan this year though, I’d love to go back in a GT3 car, especially one like that.’

Everyone who goes to Bathurst for the first time seems to come back with a story to tell about just how different racing is on Mount Panorama. Predictably, the experience up on that mountain for Modell was unlike anything else he’d ever seen.

‘I have to say, that I hadn’t seen the place before I went there, so I got there with jet lag and went straight into the weekend. When you get to the top of that track and look down, it’s just plain scary, you don’t realise, you don’t think you’re driving that high, but when you do eventually reach the peak and look down, bl**dy hell, the cars at the bottom look like little ants. It’s mental,’ he laughed.

Devon Modell really is a busy boy nowadays, and rightly so. After this season’s over he’ll have an even larger resumé to show for, having driven at higher profile events and at the demanding circuits the Blancpain Endurance Series has to offer.

And, if all goes to plan, he’ll continue to build on that for a very long time.