The news coming out from the London launch of the FIA World Endurance Championship that the Championship has taken a unilateral decision to terminate the use of grid girls at their race meetings has stirred a real debate.

Seen by many as an historical anachronism, by others as ‘part of the show’ its a move that will take nothing from the on-track entertainment, but will likely put the FIA WEC in the centre of a mass media debate for some time to come.

In amongst the reactions, from fans and motorsport professionals one stood out for me, it came in the blog of a friend and colleague.

Shea Adam (@gearboxgirl on Twitter) comes from a motorsport and media family, and is a lady that I have worked alongside at race meetings around the world for several years now in the radio studio, in the media centre and in the paddock.

Her views are well argued, and the debate continues.

Right now, there’s a division sweeping through the world.  People standing on both sides of the line think that they are right and that the other side is either crazy or stupid. Befalling the leaders is great stress; how to we please both sides? It simply isn’t possible! But a decision has been made, action has been taken, and naturally half of the feedback is negative. What am I talking about? The controversy surrounding Grid Girls, of course. 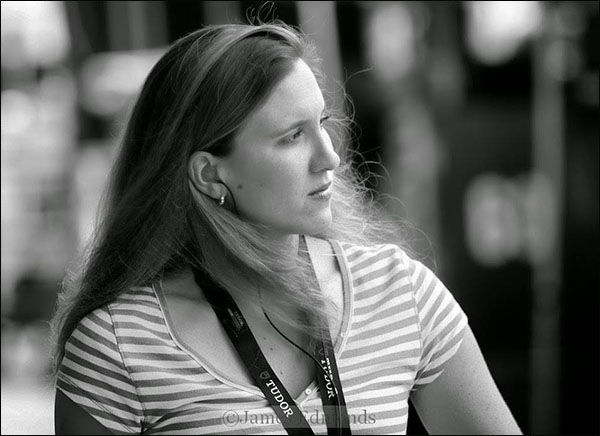 Long ago, in a galaxy not so far away, girls were placed on the grid of a race. Cast your minds back to a time when most of us weren’t born.  A man had a dilemma. With so many beautiful cars on the grid, how do you make your car stand out? Then, he saw a pretty young girl and decided that was his solution, that racing as a whole would benefit by having her stand next to a beautiful car before the race started. This, he decided, would greatly benefit his team, because surely people would come over to appreciate the girl. Okay, okay, so I’ve completely fabricated this happening but that’s the way I imagine it having occurred in my fiction writing brain. Hopefully, that gave you, reader, a laugh at the very least. If not, sorry for wasting that last paragraph of your time.

In all seriousness though, I can speak about grid girls because I was one. Yes, you read that correctly. Before I decided to take racing seriously, I was simply a young woman who was enjoying a weekend at the track with her dad. Corvette Racing took pity on my dad, who was going crazy with me wandering around and bothering more people than helping. The year is 2011, the track was Mid-Ohio, and I had chosen to be at a race-track instead of walking across a stage to get my diploma from FSU (They mailed it anyway so who really cared?). Corvette Racing had me doing various jobs for them, including standing with the drivers during the autograph session to roll up posters, taking VIPs around and showing them how the hot pits work, and other various tasks. My big moment came when someone unraveled the American flag and asked if I wanted to hold it in front of the #3 car. I jumped at the opportunity, as all 18-year-old racing fans would. 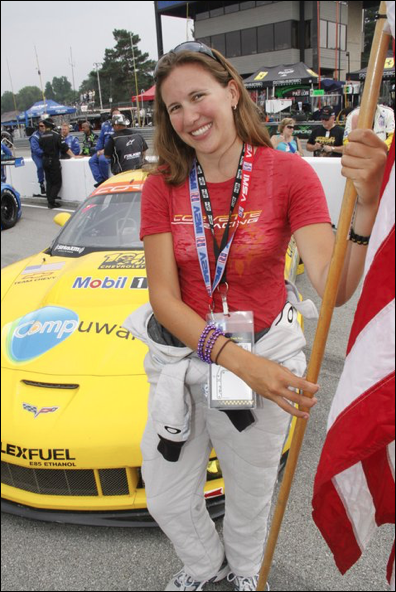 When I got to grid, I realized my mistake. Tommy Milner had not done me a favor by qualifying 8th that week. In the 7th position was the #01 of Extreme Speed Motorsports with their grid beauty. This woman was dressed in a skin-tight black outfit, adorned with a green checkered pattern down the side and, ahem, busty features that weren’t well hidden. In 9th, on the other side of me, was the #17 of Team Falken Tire. Anyone who has been to either an ALMS or TUSC race knows Team Falken Tire and their girls. These two ladies had white boots that came up to just below their knees, very short shorts, and tops that were like bands, covering the essentials. I remember so very clearly what the other ladies were wearing because what I had on did not even vaguely resemble what they did.

Thanks to my need to be in the pits, I was in a firesuit. In keeping with tradition, it was not my personal firesuit and instead was about 5 sizes too large. I did have my Corvette Racing t-shirt on, but it covered everything. And let me just add here that the girls on either side of me were very fit and in excellent shape while I hadn’t seen the inside of a gym in about 2 years. Not a good combination.

I was extremely self-conscious during the 20-minute period of being on the grid. On either side, photographers and fans alike were stopping to admire both the Ferrari and Porsche and, most notably, the women in front of those cars. Now, I was in front of a Corvette…in Ohio…and, by the way, the very Corvette that had just won the 24 Hours of Le Mans a month and a bit previously. Yet, most of the people walking by elected to either not take a picture of the car or else ask me to move a tiny bit as to cover only the front left headlight. One man could clearly see how embarrassed I was to be there and asked if I could take a picture with his son, holding the giant American flag in front of the Corvette.  I felt so proud to do this. We smiled and the little boy said thank you, before I saw them run over to the Falken girls and make the same request. Pride gone.

My self-respect did come back, though, as the session wound down. A man came over to me with his two young daughters. He extended his right hand and said, “I just wanted to thank you for choosing to not be half naked on the grid. It sends a good message to my girls.” I nodded, not knowing what to say, and shook his hand. I think I told them to enjoy the race but honestly, I was so taken aback that I can’t remember my exact words. That one moment made the whole grid experience worthwhile. It no longer mattered that people didn’t want to take my picture because I was fully dressed and not as pretty as the girls on either side. I was content with the idea that maybe, unintentionally, I had made a little difference.

But all of that went away quickly as the race started. I pushed the entire experience to the back of my mind and enjoyed what was one of the best and by far the wettest ALMS races I had seen at the time.

It wasn’t until I decided to forge a career in the motorsports world that I realized how the use of grid girls could effect how people view women in the paddock. A pretty young girl, I’m sorry to say, was viewed as a potential grid girl, a driver’s girlfriend, or a temporary feature.

During my early ALMS days, working in the tv compound, I would take my lunch break to walk through the paddock. Some of the drivers remembered me from having met the year before with Dad.  As I spent more and more time with Marion of Marion’s Hospitality, enjoying our wonderful lunch chats, some people discovered my ambitions and started treating me like someone who was going to be around for a while.

It is a hard thing, to be taken seriously in the paddock. It is even more difficult as a young woman to try and show that you belong when every other girl your age in the paddock isn’t trying to make a long-term career. Stereotypes were set and I had to prove that I wasn’t one.

After my first Le Mans, the attitude changed. A lot of people realized then that I wasn’t just a pretty face wandering aimlessly through the paddock, looking for either a driver to shack up with or a job with a team. I had to prove myself on an international stage before people would stop thinking of me as another girl to come and go from the series.

All people have to earn respect in their work environment, no matter what field of work they are in. But as someone who had to prove she wasn’t just there to be an ogled at object, I can say that mine was an uphill battle.  And that battle persists. There are still people who argue that I have my job because of my looks. Well, people, I can guarantee that isn’t true. Aside from my bosses having said it over and over again, you don’t see us on the radio!

The saddest part is that my story is not unique. Every woman in the paddock has to prove that she belongs and isn’t just there. Whether she is working in PR, running a team, driving, engineering, or doing any number of jobs around, a woman in the paddock has to earn the respect of her peers and prove that she belongs. I hope that without the Grid Girls around, half naked and persisting the stereotypical role of women as lookers not workers, all of our struggles to be taken seriously just got a little easier.