Two weeks after the tragic accident at the VLN season opener, in which a spectator was killed, this weekend sees the next race on Nürburgring-Nordschleife taking place. It is also the first race with the newly DMSB issued rules, the speed limit in certain sections, the reduction of vehicle power by five percent and the limited access to some spectator areas. 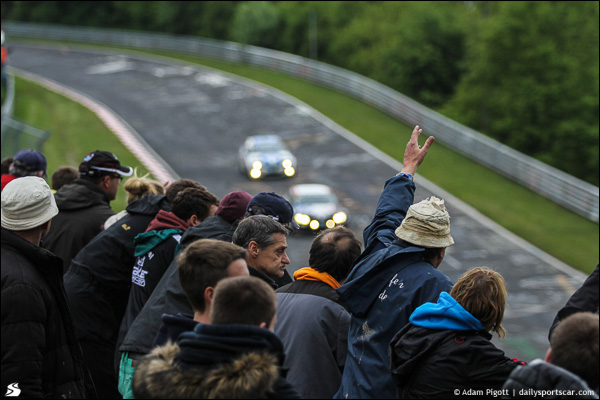 For the 24 Hours Qualifying Race, which will be held on Sunday over a distance of six hours, the provisional entry list sees a total of 78 cars entered. Alone 13 of those originate from the class SP9 for GT3 race cars. The entry is down compared to the VLN season opener due to the opening rounds of the Blancpain Endurance Series at Monza and the ELMS/FIA WEC doubleheader at Silverstone.

The 6-hour race is the premiere of the Mercedes-Benz SLS AMG GT3 of the Haribo Racing Team, the Goldenbears team relies on the driver’s crew Uwe Alzen, Marco Holzer, Mike Stursberg and Maximilian Götz. In addition Maximilian Götz, a second pilot from the Mercedes-Benz DTM squad will be taking part in the race, Christian Vietoris is entered in the SLS of Zakspeed together with Luca Ludwig, Tom Coronel and Sebastian Asch. The colors of Audi will be represented by the Audi race experience and by Twin Busch Motorsports. For the Audi race experience Niki Mayr-Meinhof/Rod Salmon/Micke Ohlsson/Ronnie Saurenmann and Franky Cheng/Lee March/Shaun Thong will take their turns in the two Audi R8 LMS ultra. As per usual for Twin Busch Motorsports, the two twins Marc and Dennis Busch will be found behind the wheel.

With four vehicles BMW has the largest contingent in the GT3 class, two cars each come from Walkenhorst Motorsport powered by Dunlop and BMW Sports Trophy Team Schubert. At Walkenhorst Motorsport especially the Z4 GT3 with Felipe Laser, Michaela Cerruti, John Edwards and Ferdinand Stuck must be regarded as a contender. In the second Walkenhorst Z4 Henry Walkenhorst, Ralf Oeverhaus, Christian Bollrath and Peter Posavac will take to the track. Schubert Motorsport is using the quartets of Dirk Müller/Alexander Sims/Dirk Werner/Marco Wittmann and Dominik Baumann/Claudia Hürtgen/Klingmann/Martin Tomczyk. Both driver line ups in the Schubert Z4 GT3 must be regarded as the heavy favourite for the overall win.

A Single car entry come from Falken Motorsports with their Porsche 911 GT3 R and the drivers Peter Dumbreck and Wolf Henzler and the Nissan GT-R NISMO GT3 Schulze Motorsport. Where in addition to Tobias Schulze, Michael Schulze and Kazunori Yamauchi also the winner of last year’s German edition GT Academy Marc Gassner will have his first race outing in a GT3 car. Gassner already has some VLN starts in production class vehicles under his belt and has gained valuable Nordschleife experience.

Also taking part in the event are the two SCG003C sports cars of the Scuderia Cameron Glickenhaus, bringing their full driver line-up for the 24 Hour Race in five weeks time. David Jahn, Manuel Lauck and Marino Franchitti share one of the SCG003C, while in the sister car Ken Dobson, Jeff Westphal, Thomas Mutsch and Franck Mailleux will share the driving duties.