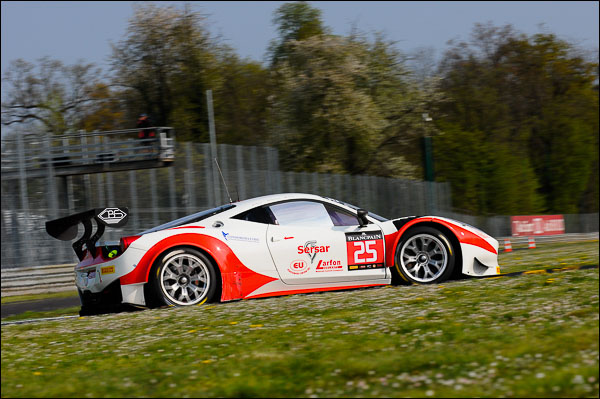 As noted by Triple Eight’s PR man James Warnette, the Italian’s time of 1:48.069 was two tenths quicker than Alessandro Pier Guidi’s overall pole position time from last year, which was set in similar warm and dry conditions – an indication that both the cars and the series’ Pirelli tyres have got faster over the winter. 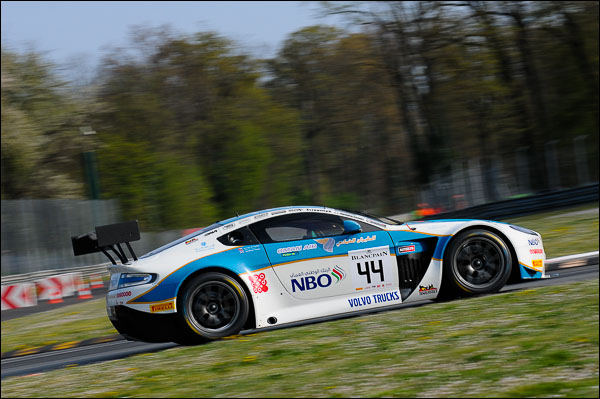 Daniel Lloyd went second-quickest in the Oman Racing Aston Martin run by Motorbase. Team boss Dave Bartrum said afterwards: “He did a new tyre run and he was still dialling himself in. He reckoned that when the tyre was its peak he was still a bit scrappy and there’s maybe another three-tenths to come.” (We’ll have a lot more from the Motorbase boss during the week as part of a new regular feature profiling the teams of the Blancpain Endurance Series.)

Lloyd was one of several drivers with no previous experience of Monza (even if they were silver-rated) who were given special dispensation to run laps in the Bronze Test, with Triple Eight’s Ryan Ratcliffe also among those taking advantage of this opportunity. 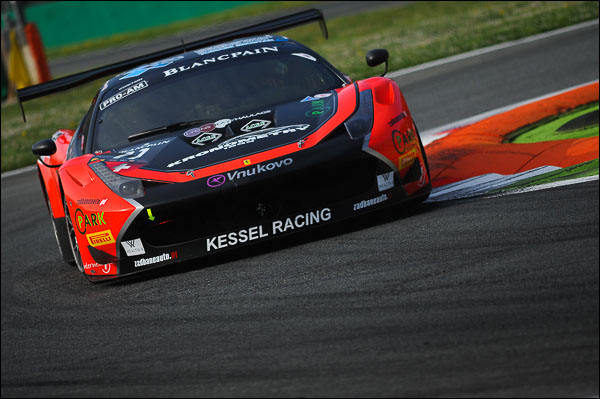 Third-quickest was Michael Broniszewski in the #11 Kessel Ferrari. The experienced Pole is handling all of the work in this car today, as his co-drivers Alessandro Bonacini and Michael Lyons are both racing in the ELMS at Silverstone and will fly to Monza for qualifying tomorrow morning.

At Nissan, Florian Strauss was looking forward to beginning his ‘team leader’ role in the Pro-Am Cup #22 GT-R, guiding new GT Academy graduates Ricardo Sanchez and Marc Gassner. “Ricardo did the Dubai 24 Hours, so we’re confident he should be up to speed, Marc wasn’t at Dubai and his seat time is pretty low. so getting as much running in the sessions today will be vital,” he told us. The Pro-Am car is 2014 spec while the #23 Pro car of Alex Buncombe, Wolfgang Reip and Katsumasa Chiyo is in 2015 spec, but Strauss reckons this shouldn’t be a major issue. “There’s not many all-new cars racing, so we should be okay,” he said. “Monza is a pretty unique track, so I think Silverstone will be a better measure of where everyone is in relation to each other.”

After contesting Spa and the Nurburgring last year, Australian racer Liam Talbot is back for a full season of Blancpain in one of the Kessel Ferraris. “This is the top GT championship in the world – we don’t have the same depth of talent in Australian GT,” he said. “As an amateur driver with ambitions to do Le Mans one day, it’s a great place to measure myself and see where I need to improve.” Talbot is in Europe for a six-week stretch, and is also contesting VLN rounds and the Nurburgring 24 for the Aston Martin Test Centre team (which is separate to the Prodrive-run AMR outfit), driving the recently released Vantage GT12 track-focused road car.

Having only confirmed the full line-up of its #55 Pro Cup car last night with the addition of Nicolas Armindo, Attempto Racing has made a last-minute change to the roster in the #54 Pro Am-entered McLaren 650S. Local duo Alessandro Balzan and Ronnie Valori will fill the seats previously occupied by German Phillip Wlazik and American Emerson Newton-John. The drivers of its Am Cup Porsche remain unchanged. We spoke to Armindo’s #55 co-driver Miguel Ramos in the garage, and he wasn’t particularly confident about the challenge ahead: “It’s very different to the Corvette I drove in GT Open and handles very nicely,” he said, “but I don’t think the speed is there yet. They will confirm the Balance of Performance this evening I think, but if it’s the same BoP I drove in the tests it’s not going to be a good race for us!”

Despite a particularly strong line-up of Oliver Morley, AMG factory driver Maro Engel and IMSA GT3 Cup champion Sean Johnston in the #18 Pro-Am Mercedes SLS, Black Falcon team manager Sean Paul Breslin was anticipating a tough Sunday. “This is always a tricky track for the SLS, as there’s no real aero corners,” he noted. As one of the top Mercedes GT outfits, Black Falcon would be expected to be among the first in line for the new AMG-GT GT3 revealed at the Geneva Motor Show earlier in the year. “Hopefully, yes,” said Breslin, “although there won’t be any customer cars delivered for racing this year.”

The new batch of Lamborghini Super Trofeo one-make racers is out in force at Monza on the support bill, looking and sounding glorious. The manufacturer’s new-found status as a works team has cleary made this series more attractive to ambitious young pros – just as the Porsche Carrera Cup has been for many years. Reigning GT Open champions Daniel Zampieri and Roman Mavlanov are sharing a car and GT veteran Matteo Bobbi is also in one of the Huracans. Lamborghini is holding a press conference tonight at 6:30pm to mark the beginning of its 2015 season.