The Lamborghini Huracan GT3 finally makes its competition debut at the Monza Blancpain Endurance round this weekend, along with the single-make Super Trofeo version of the eye-catching supercar. 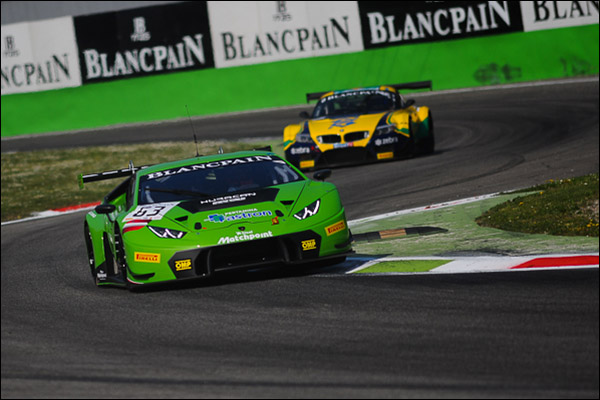 Sanna said the Huracan was making its race debut in the Blancpain Endurance series as it’s “the most important and challenging GT series in the world,” although as with the new McLaren, there is some dissatisfaction with the SRO Balance of Performance formula applied to the car. The #63 and #19 cars were 30th and 31st fastest respectively in free practice, improving to 10th and 11th in pre-qualifying.

“It’s difficult to be happy with Balance of Performance,” Sanna told us after the conference. “This morning was our first time running the car with it, so we had a different ride height, and we need to get better at placing the extra weight in the car. But pre-qually was positive and this was our first experience working with this BoP, so hopefully it will get better.”

The GT3 car’s development programme will continue for most of the season, with the first deliveries of cars to customer teams expected in October – so a late-season appearance with a team other than official patner Grasser, possibly in an Asian or Middle Eastern championship is certainly feasible.

Earlier, Winkelmann had begun by referencing Lamborghini’s 1989-1992 F1 engine supply venture and late-90s one-make series for Lamborghini Diablos, before summarising the seven-year history of the latest chapter, which began with the European Super Trofeo in 2009.

Winkelmann confirmed that 75 Huracan Super Trofeos have now been sold, and the model makes up 27 of the 31-strong Trofeo grid here at Monza. Half of the teams entered are new to the series and between them they’re running drivers from 11 nationalities – 26 of them new to the series.

The final announcement concerned the creation of a Lamborghini-backed junior team run by Vincenzo Sospiri Racing, with two drivers in Japanese F4. There are no immediate plans for teams in European or American single-seater series just yet, but it seems to be a possibility for the future.