Treluyer set another fastest lap, an incredible 1:40.836 on lap 26. This would have placed him 10th on British GP grid!

The LMP2 Signatec Alpine went into the tyre wall at T9 (Copse), bringing out the safety car. The #1 Toyota came in while everyone else stayed out. Then race control accidentally threw a green flag, so it looked like the Toyota had gained the advantage…however race control recognised the error and threw the yellow again to carry on barrier repairs.

At the time of the green being shown all the GTE Pro Astons pitted, meaning the rest of the Pro field gained a minute by the time of the yellow’s correction, meaning the previously leading train of Astons was now running at the back of the field, everyone else having got in and gained an advantage.
The leading #17 Porsche came into the pits and up on the jacks, driver out of car. Apparently gearbox issues, the car looking out of contention. 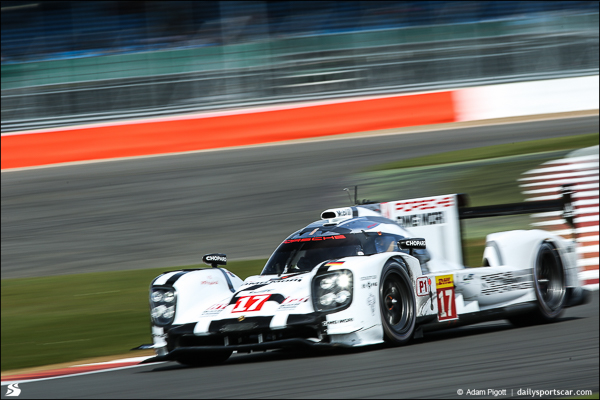 Bizarre move in a change for second, the two Audis 8 and 7 swapping places into T1, their pace forcing them off track , rejoining on the approach to the Farm curve.

Shortly afterwards the #8 Audi came into the pits from 3rd: obvious rear bodywork damage and wheeled back into its garage having got into a tangle with the #88 GTE Am car at Becketts, but the car was put back on track having lost a lap.

With 4 hrs 26 mins to run there was a momentary change for the LMP1 lead, as Treluyer overhauled the lead Porsche into Becketts. Lieb had got blocked by the Strakka prototype, the Audi taking advantage around the outside. However the sheer straightline speed of the Porsche managed to re-take the position into Stowe, but both lead cars pitted immediately after this. All other P1 cars made their pit calls at this point. However, only the #2 Toyota kept its driver aboard, Alex Wurz gaining a 40 second advantage to take the overall lead. When all cars got back into their rhythm, the 18 Porsche and #7 Audi were back at it, swapping places almost at every lap.

The GT Pro class at this point had hotted up again, the #71 and #92 tied together.

The HPD of David Heinemeier-Hansson had climbed to third in LMP2, the KCMG car having pitted on lap 56, a stone having punched a hole in its radiator. The two G-Drive Ligier – Nissans still held first and second in class.

With just over three hours to go the #2 Toyota pitted, Wurz handing over to Mike Conway and losing the 12 second lead it had held. The battle for first raged on between the #7 Audi and the #18 Porsche, the position swapping back and forth between Fassler and Jani, the Porsche with a very marginal advantage in the straights, but the cars very well matched indeed.

This was without doubt one of the closest and most sustained scraps for the LMP1 lead endurance racing has seen in some while. A titanic effort by both drivers to get the advantage while slicing through traffic, notably without impact. The racing was clean and professional, no quarter given but all respect shown, the perfect demonstration of prototype racing at its very best. These two slugged it out lap after lap after lap. Anthony Davidson’s Toyota was 11 seconds back, but gaining on this battle at 1 second per lap. The #8 Audi was also closing in behind in a bid to unlap itself, 5th overall, managing to get past the #7 car as the #18 Porsche enjoyed a brief 1.8s advantage. The wick was turned up even more as the #8 Audi took a cheeky advantage to unlap itself from the lead Porsche as both cars speared past a GTE Am Ferrari, this move bunching up all three cars into Vale. #8 pitted immediately, Loic Duval staying in. Davidson pitted with 3 hours 34 mins to go, staying aboard and just taking fuel.

GTE Pro meanwhile was now led by Patrick Pilet in the #92 Porsche, 10 seconds ahead of Bruni’s #51 Ferrari, James Calado now third in the other AF Corse car. The two Toyotas were now squabbling for second place, Davidson getting around Conway (who was carrying part of a bollard after an earlier indiscretion) as the leading Porsche pitted, taking fuel and tyres and a fresh driver in the form of Romain Dumas. Dumas was shoved wide into Turn 1 by the #7 Audi for third position.

Davidson led by 7 seconds from team mate Conway, Lotterer third and closing in on fresher tyres for Audi only two seconds shy, aggressively reeling in the Toyota and passing in the Luffield complex. The Audi’s move was soon followed by the Porsche as the Toyota left the circuit at Turn 1. Perhaps the tyres were getting past their best, but the team also readied new front bodywork.

The #51 and #71 GTE Pro Ferraris were joined in battle for second / third as attention shifted back to LMP1 as Lotterer closed in on Davidson’s lead, the Toyota’s tyres having had their best.

The LMP2 leader was still the #26 G-Drive Ligier JSP2, Rusinov suffering a small spin as he was blocked by the #97 Aston Martin under braking at the end of the Wellington Straight. The car was still lapping nearly 2 secs a lap quicker than its team mate now in the hands of Ricardo Gonzales. The LMP1 battle had closed right up again as it speared through traffic. Lotterer got up the inside of Davidson into The Loop, but Davidson was having none of it, going back at the Audi down the old start straight despite fading tyres. The pace of the Audi however was just a little too good.

GTE Pro was going into a phase of pit stops as the hour closed, Calado’s Ferrari first in.