It was a total of 75 cars making up the grid of the Nürburgring 24 Hours Qualifying race, some minor changes compared to the entry list were found strolling through the paddock. With Marc Gassner on duty for the Nissan GT Academy Team RJN at the Blancpain Endurance Series opener at Monza it was Michael Krumm taking his seat in the Schulze Motorsport Nissan GT-R NISMO GT3. At Bentley Motorsport the driver line ups were shaken up as well, with Lance-David Arnold and Clemens Schmid in one of the Bentley Continental GT3s, while Jeroen Bleekemolen and Christopher Brück shared the sister car. 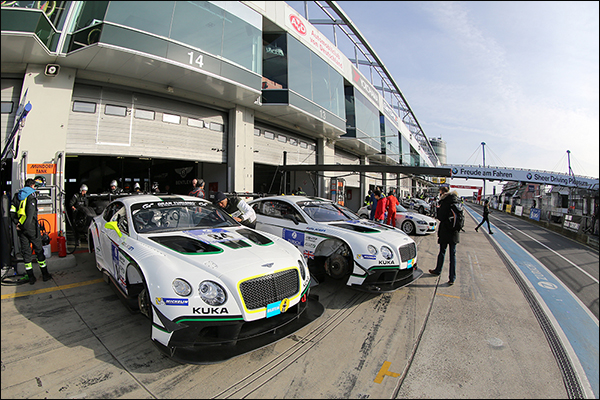 Before the event started, the ADAC Nordrhein worked out how the new safety rules for the Nordschleife would be applied, especially in regard to the new speed limit rules for the Flugplatz, Schwedenkreuz and Döttinger Höhe section of the track. In all areas the governing body decided to have the cars speed up out of the previous corner to the speed limit, 200 km/h at the Flugplatz and 250 km/h at Schedenkreuz and the DÖttinger Höhe. The decision to have the cars just speed up into the slow zones and not requiring them to slow down for one was met with a lot of praise in the paddock. The new pitlane speed limit of 30 km/h was criticized by some teams, as they ran into trouble of slowing their cars down from the previous used 60 km/h. 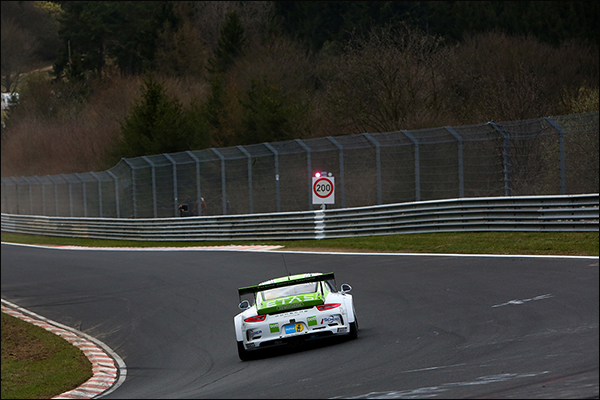 Keeping it close to the actual Nürburgring 24 Hours race the Qualifiying race consisted of a free practice, a night qualifying and a day qualifying session plus a six hour race. Just dropping the Top 30 qualifying. The night qualifying session saw Maximilian Götz in the Haribo Racing Team Mercedes-Benz SLS AMG GT3 set the fastest time, with a lap time of 8:25.283 minutes he was just about 4,5 seconds off last years pace. A surprise second placed Lexus LFA Code X entered by Toyota Gazoo Racing, was just about 1,5 seconds off Götz’s pace. Another half a second back it was the Zakspeed Mercedes-Benz SLS AMG GT3 in third. Both of the Scuderia Cameron Glickenhaus SCG003C racers finished the night session in fourth and fifth. 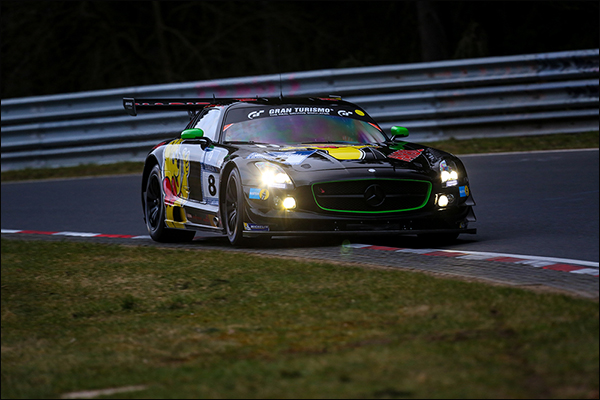 Sunday’s day qualifying session saw plenty of drama in the one hour timed session. Götz kept his pole position, making it a successful first qualifying for the new Haribo SLS. Moving up one place, was the Zakspeed SLS, just edging out the Gazoo LFA Code X. The drama really started to unfold for the final spots inside the Top 10, as those guaranteed a starting spot in the Top 30 Qualifying session of the Nürburgring 24 Hours, also meaning the car would get the blue flashing lights for the race. Behind the LFA it was the two SCG003C sandwichinging one of the Bentley Motorsport Continental GT3s for positions four through six. The final four Top 10 spots went to both of the BMW Sports Trophy Team Schubert BMW Z4 GT4, the second Bentley Motorsport Continental GT3 and one of the Walkenhorst BMW Z4 GT3. Missing out on a Top 10 finish were among others the TwinBusch Audi R8, both R8s of the Audi race experience, the Schulze Motorsport Nissan and the Falken Motorsport Porsche. 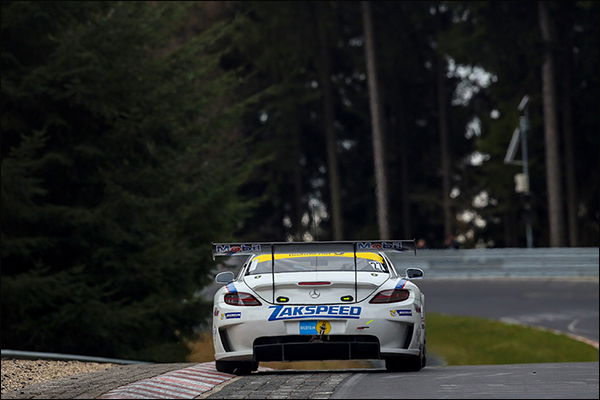 The race drama unfolded even before the cars saw the green flag, the Zakspeed Mercedes-Benz SLS AMG GT3 didn’t make it to the starting grid after the team ran into trouble with the engine cooling during the closing minutes of the second qualifying session. And during the formation lap the SCG003C of Franck Mailleux, Thomas Mutsch, Ken Dobson and Jeff Westphal pulled into the pit lane even before the field hit the Nordschleife. The car had to be retired with an electrical problem.

When the lights went green it was Uwe Alzen in the pole sitting Mercedes-Benz laying the hammer down, sprinting away from the field, even before they hit the Nordschleife. After completing the first race lap Uwe Alzen had a lead of about 10 seconds, ahead of the single remaining Scuderia Cameron Glickenhous SCG003C with Manuel Lauck behind the wheel and Jeroen Bleekemolen’s Bentley Continental GT3. The following laps saw Uwe Alzen stretch his lead even further, while Martin Tomczyk in one of the Schubert Z4 GT3 was working himself past Bleekemolen during lap three and taking Lauck for second place a lap later. Lauck hit pit road after the fourth lap, the car was black-orange flagged due to breaking the noise restrictions. The Scuderia Cameron Glickenhaus team then fitted a new muffler, but the car lost valuable time. 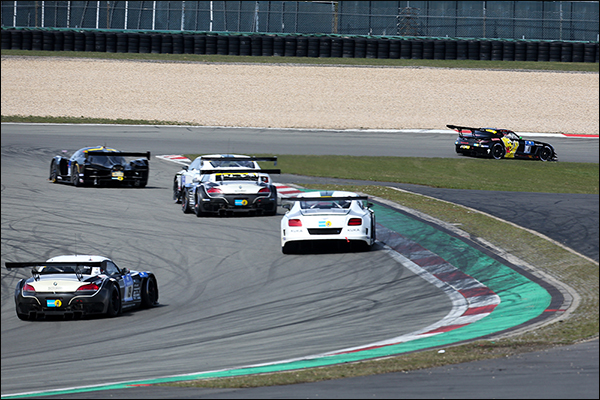 The BMW Sports Trophy Team Schubert decided to go for the undercut by pitting Martin Tomczyk’s Z4 GT3 on lap six, Tomczyk was replaced by Claudia Hürtgen behind the wheel. Also hitting the pit lane was Lance-David Arnold in the second Bentley Continental GT3. Jeroen Bleekemolen retook second place, with the second BMW Sports Trophy Team Schubert BMW Z4 GT3 moving up to third. Those two plus the Falken Motorsport Porsche and one of the Walkenhorst Motorsport BMW Z4 GT3 then hit the pit lane on lap seven, making way for the Toyota Gazoo Racing Lexus LFA Code X to take second place. In the meantime, the Schulze Motorsport Nissan GT-R NISMO GT3 got in trouble at Brünnchen, resulting in a puncture and a slow drive back to pitlane for Tobias Schulze. The first round of pitstops was completed on lap eight, when Uwe Alzen handed the Haribo Racing Team Mercedes-Benz SLS AMG GT3 over to Marco Holzer. The late pit stop let the Haribo SLS fall back to fourth, behind the now leading BMW Z4 GT3 with Claudia Hürtgen behind the wheel, Bentley Continental of Clemens Schmid and the TwinBusch Motorsport Audi R8 LMS ultra. 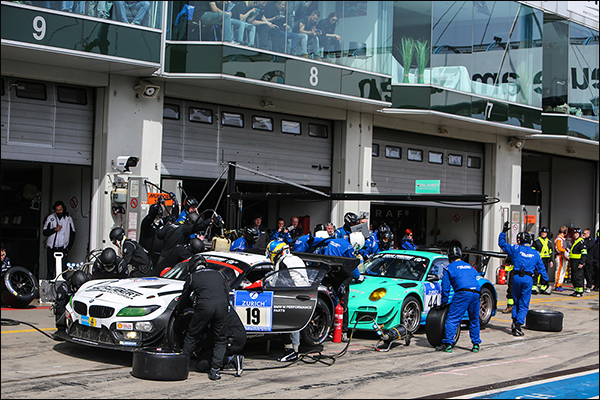 Just two laps after visiting the pit lane, Wolf Henzler brought the tenth placed Falken Motorsport Porsche 911 GT3 R back into pit lane due to a vibration. He handed the 911 over to Peter Dumbreck, the car didn’t lose a place but did cede valuable ground.

The Arnold/ Schmid Bentley Continental GT3 was also hit with a black-orange flag due to not respecting the noise restrictions, so after a long repair stop it was taken out of contention. Just lap later, the second Continental GT3 hit technical trouble with the car stranding at the Schwalbenschwanz section. After Claudia Hürtgen once again hit the pit lane, Marco Holzer was able to retake the lead but only until he completed his stint and handing over to Maxi Götz. After the second round of pit stops it was the Schubert BMW Z4 back in the lead ahead of the Haribo SLS and the second Schubert Z4. Fourth and fifth place went to the Porsche 991 GT3 Cup cars of Black Falcon and Manthey-Racing. Making up lost ground as well was the Falken Motorsport Porsche.

The third placed Schubert BMW Z4 GT3 with Alexander Sims behind the wheel was hit with a 58 second time penalty, due to not respecting the pit lane speed limit of 30 km/h. The car was still kept in the top five, which were made up of their sister Schubert Z4, the Haribo SLS and the two 991 Cup cars of Black Falcon and Manthey. Lurking in sixth was the Falken 911.

The drama really unfolded in the last hour, when Maximilian Götz got in the SLS got into the car on lap 33 looking all set to score the victory for the Haribo Racing Team. Trying to chase him down was Jens Klingmann in the Schubert Z4 GT3. But with just minutes to go Götz hit the pit lane once again for an unscheduled stop due to a vibration at the front wheels, this gave the lead to Klingmann’s Z4. And just minutes later Götz stranded the SLS at the Karussell section.

The victory was Schubert’s but due to Klingmann not seeing the race clock he crossed the start finish straight with one second left on it and was the only driver to complete a 41st race lap. Completing the podium behind him were the Manthey-Racing Porsche 911 GT3 Cup-MR of Matteo Cairoli, Sven Müller and Christopher Breuer and the Black Falcon Porsche 911 GT3 Cup of “Gerwin”, Manuel Metzger, Philipp Eng and Hannes Plesse. In a drag race down the start finish straight it was the Peter Dumbreck in the Falken Porsche hodling off the second Schubert Z4 GT3 for fourth position. 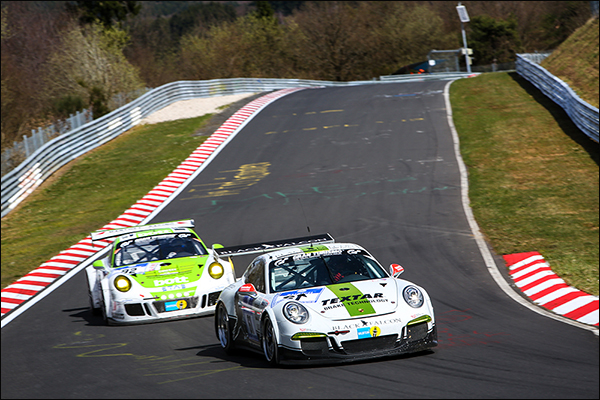 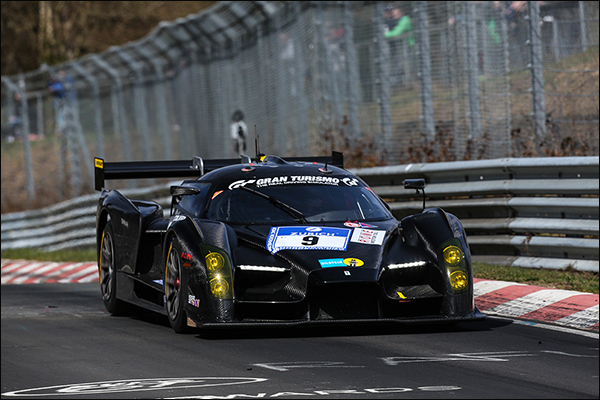 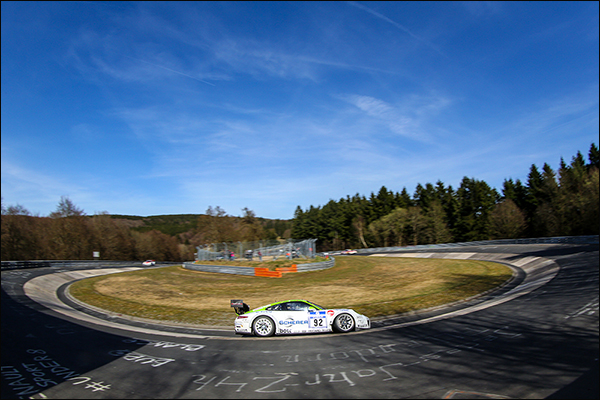 The next racing on the Nordschleife will be the second VLN round, on April 25th. It’ll also be the final chance for the teams to fine tune their cars for the Nürburgring 24 Hours.