At first glance, the 2015 edition of Long Beach looks like a simple affair, both Wayne Taylor Racing and the 25 BMW won, both pole winners ran to the checkered flag, but there was actually much more to it than that.

Up front, it was Ricky Taylor holding the lead throughout the first stint, although Scott Pruett was able to close within a second when the pit stops occurred. To add some intrigue, the Ganassi Ford ran an additional couple laps, giving them fresher tires and the possibility of running a bit harder due to having a bit more fuel available. It was not to be. 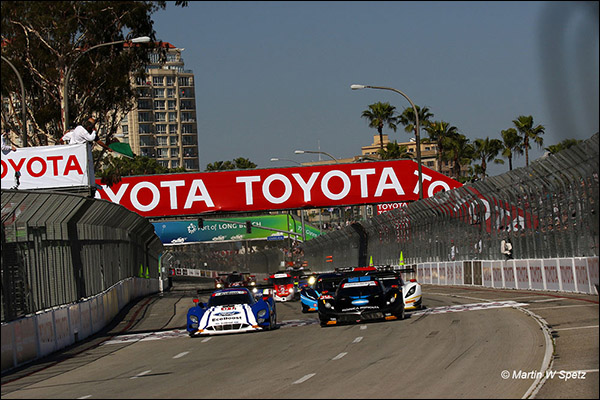 At the drivers change, Joey Hand replaced Pruett and pulled out of the pits into the lead, but on cold tires, Hand touched the wall. In the short time it took for him to compose himself, Jordan Taylor was through for the lead. The gap fluctuated depending on traffic, but in the end it was Jordan bringing the WTR Corvette home to the win. The gap of 3 seconds at the flag was not truly representative of what the battle was, as Hand was held up significantly by one of the GTLM Corvettes on the last lap. Hand had entered the last lap 1.2 seconds back. 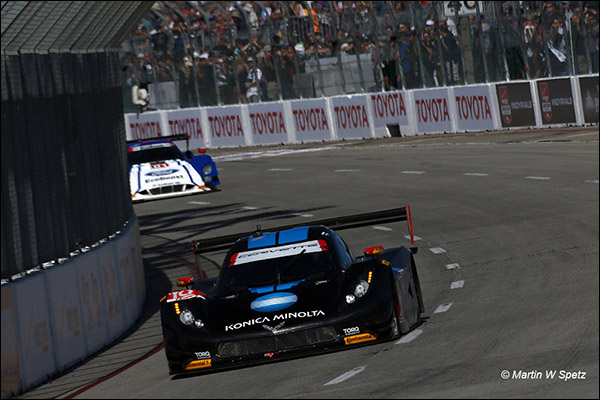 Jordan, “Ricky had a flawless stint leading the whole race, and when I came out of the pits, I don’t know if it was a slow out-lap [for Hand] or what, but the 01 got around us and our strength was under the braking and we’d only have one shot at it so I basically just went for it and thankfully it stuck. It’s great for Konica-Minolta on our first-year anniversary together here at Long Beach.”

Joey, “I came out in front of the No. 10, but they were on hot tires and tried to attack as well as I could, but couldn’t hold him off. I tried to settle in second and see what I could do with it. Long Beach is one of those places where people say ‘you don’t look too happy about second,’ and I say ‘no, I’m not too happy about second.’ To be brutally honest, I’m not happy about second any day, but especially not at Long Beach, when you can see the bumper of the first-place car and you can have a go at him and have a chance to win the race.” 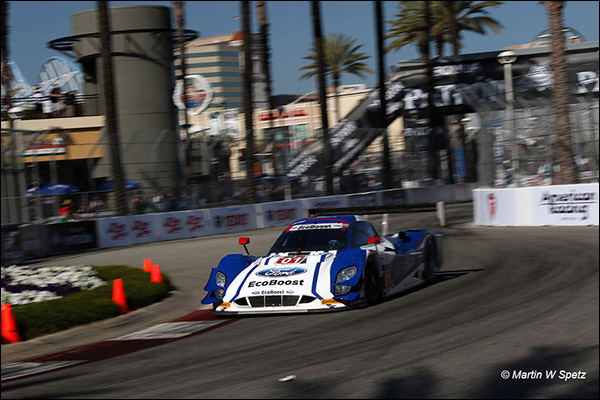 Spirit of Daytona had a quiet race to finish 3rd overall, as Richard Westbrook had enough of a gap to hold off a hard charging Dane Cameron in the Whelen Action Express Corvette by 3.5 seconds at the end. Cameron earned the 4th place position by making a strong move past his teammate Joao Barbosa with about 10 minutes to go in the 100 minute race. 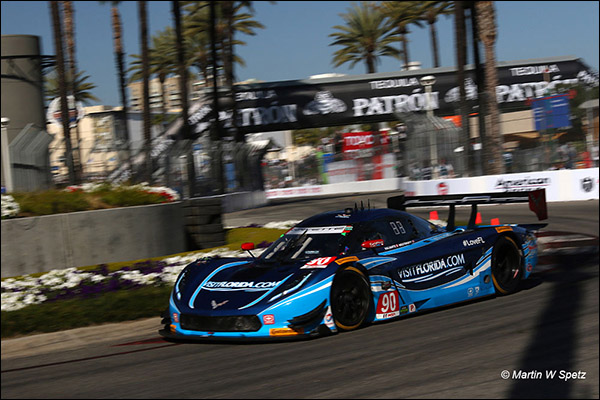 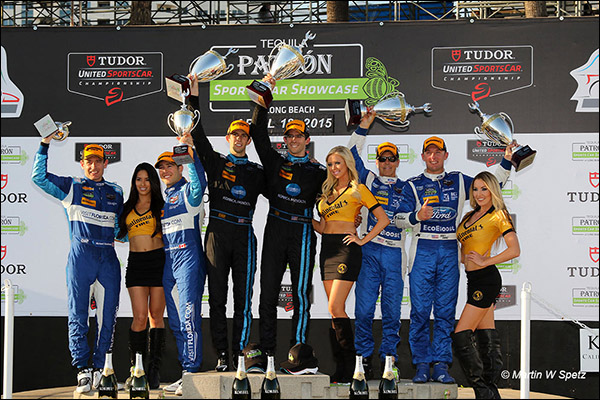 In GTLM, Giancarlo Fisichella grabbed the lead entering turn 1, setting up a Ferrari-BMW-BMW train for the rest of the first stint. While the leaders charged on, Richard Leitz was trying to take turn 1 on the outside, but he was crowded into the wall by Olly Gavin at the fountain. This put both out of contention – the Corvette made a quick stop early, while the 912 Porsche had an extended stop, which cost them an eventual 14 laps on the class leaders. 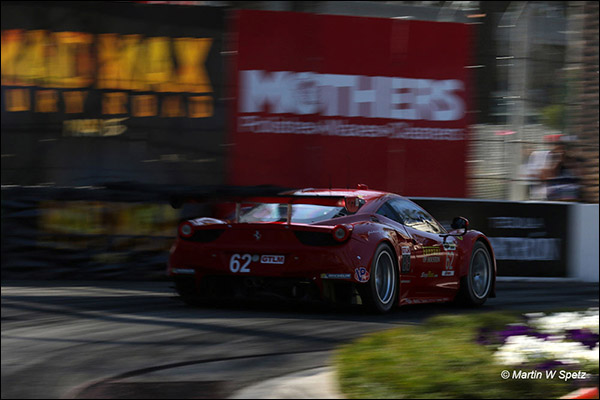 For the entire race, the Risi Ferrari and the two BMWs were the class of the GTLM class. No one else was really close. Every time Fisichella started to pull away, Auberlen was able to close the gap. It was Auberlen that stopped first, handing over to Dirk Werner. Unfortunately their stop was slowed by a poor vent on the fueling, which cost them around 8 seconds. This dropped Werner back in the pack, seemingly out of contention. The next time by, Fisi and Edwards in the 24 BMW dove to the pits. Pierre Kaffer, in the Ferrari for Fisichella emerged in the lead from the pits. He eventually pulled out a lead of about 8 seconds, but Werner was on a charge and closing rapidly. 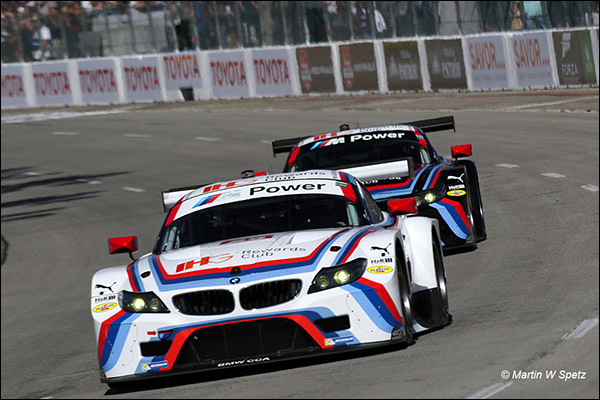 With just over 10 minutes to go, the Ferrari suddenly slowed and Werner came through for the lead when Kaffer locked up his Michelin Tires. The gap ended up as 2.9 seconds at the end. After the race, Kaffer explained that, “I was forced off line by one of the DPs, which loaded up the tires. By the time I got them cleaned up, Werner was through. I could run at his pace, but I couldn’t close the gap. We did everything right, but we just weren’t able to bring it home for the win.”

For the 25 BMW, this was a huge win, which in all likelihood kicked off a massive party hosted by Bill Auberlen. “To win Long Beach for me, it’s the best race on the circuit. I’ve always said I love winning here. We never win this race without some sort of… we always make it difficult for us.”

Werner, “Our car was just fantastic, really fast and consistent. The Ferrari had nothing for us. That was a hell of a race. It’s the first race win for me in five years. That’s awesome.”

Antonio Garcia was able to bring home the No. 3 Corvette in the 3rd spot, after Lucas Luhr had to nurse through a long brake pedal, taking him off line twice in short order. This dropped the 24 BMW to 5th in class, and elevated the 911 Porsche to 4th. 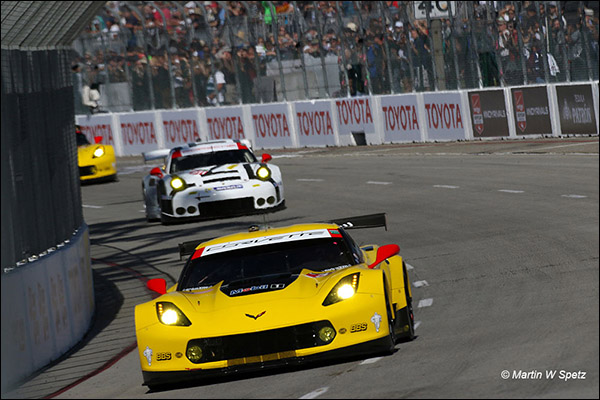 With only 17 cars on the grid and with the driver squads being comprised of pretty much pro drivers, it was not surprising that the race went caution free again. 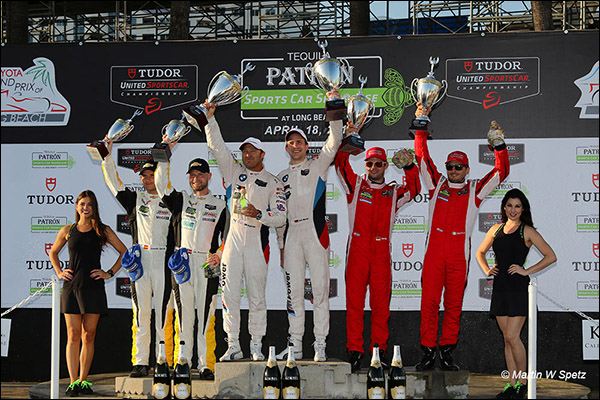 Up next in 2 weeks, Mazda Raceway Laguna Seca.