As the light began to fade at Silverstone, with around 20 hours to go and four hours down, the LNT Ginetta (now with factory driver Mike Simpson at the wheel) held a two-lap-plus advantage over the #8 Peter Cook Audi R8 GT3, which was itself two laps up on the #14 Marco Schelp Porsche, 20 seconds ahead of the #4 MJC Ferrari in fourth.

Fifth overall and leader of Class 2 was #35 Beechdean Aston Martin, now having overhauled #91 MARC Ford Focus, with both cars remaining in the lead of Class 3 and Class 2 respectively. The #33 Saxon Motorsport BMW was seventh overall and leading Class 4, followed directly by the second-in-class Bas Kouten Racing SEAT in eigth. Completing the top 10 was the #34 Porsche, second in Class 3, and the #10 Radical RXC.

Unfortunately, the #53 Moss Motorsport BMW was black-flagged for exceeding the strict 102dB noise limit in place for this event. Other likely retirements include the #88 Rollcentre BMW, which suffered a seized engine after a sudden loss of oil pressure and the #76 Jaguar, which has been in the pits for quite some time.

On lap 115, the #4 Ferrari was hit with a 21-second stop-go penalty for speeding in the pitlane, dropping it to fifth behind the Beechdean Aston. The Ferrari was pretty quick on track, too, lapping quicker than anyone else bar the leading Ginetta, which allowed it to get ahead of the Schelp Porsche into third – the German car suffering gearbox problems hurting its ability to lap consistently.

With around four and half hours gone, spots of rain were reported around the track as darkness closed in, quickly getting heavier and forcing the majority of the field to pit for wets. Eventually the rain became so heavy, the safety car was deployed. 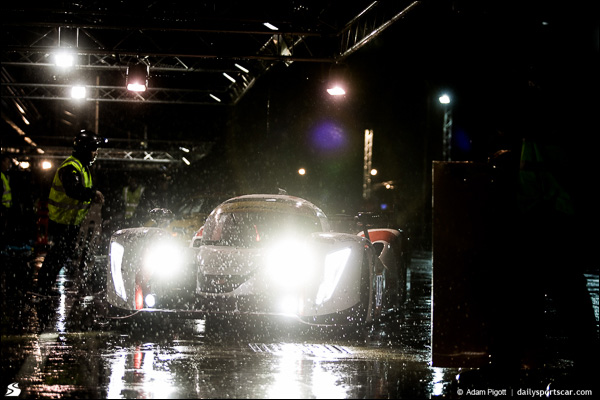 The order behind the safety car was as follows: 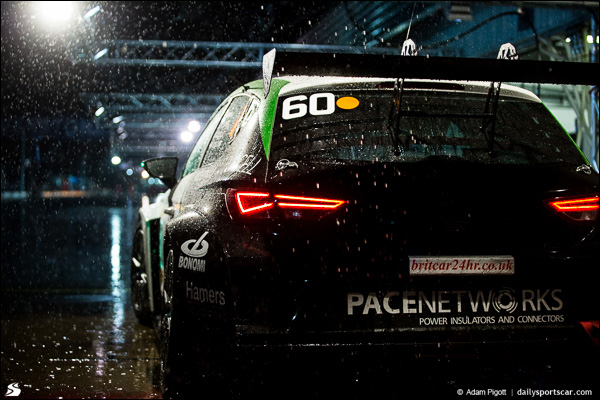 At a quarter to 10pm, with five and three-quarter hours elapsed, the green flag flew again and the Dunlop got back to racing, with rain still falling albeit much lighter than before. It wasn’t long before the MARC Focus had overhauled the Beechdean Aston for fifth overall, getting the lead of Class 2 ahead of the lead of Class 3 once again.

At the front of the field, the LNT Ginetta was being hampered by a repeatedly fogging-up windscreen. Numerous visits to the pits saw it fall back into the clutches of the chasing GT cars – and the #8 Peter Cook Audi duly assumed the lead on lap 145, with just over 17 and a half hours left to run. The Ginetta then dropped to third behind former race winner the MJC Ferrari.