The third hour of the 2015 FIA WEC Spa Six Hours opened with Porsche’s Romain Dumas (#18) and Audi’s Andre Lotterer (#7) both lapping quickly at the front of the field, Dumas leading Lotterer by 16.4 seconds, with Jarvis third in the #8 Audi, a further 15 or so seconds behind.

The #2 Toyota and #9 Audi battle continued, with the cars now being handled by Sarrazin and Bonanomi respectively in fourth and fifth, ahead of world champion Anthony Davidson in sixth in the #1 – who had a wide moment at Pouhon on lap 63.

Dempsey’s co-driver Marco Seefried then had a spin and walloped the barrier at the exit of the ‘no name’ left-hander before Pouhon. Elsewhere, the #9 Audi was taken into the garage very briefly to replace its blow window.

At the front of the field, Lotterer was unable to make a major impression on Dumas’ lead – in fact, the gap had stretched to nearly 19 seconds by lap 66. Canal in the leading G-Drive retook the lead of P2 when Evans made a routine stop in the Jota Gibson, while in GTE Pro, Richie Stanaway had taken over from Fernando Rees in the #99 Aston Martin in the lead of the class. 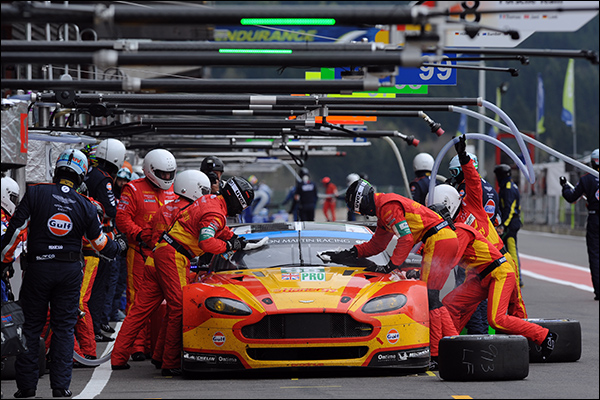 Lotterer pitted from second on lap 69, staying in the car as it received fuel and tyres. 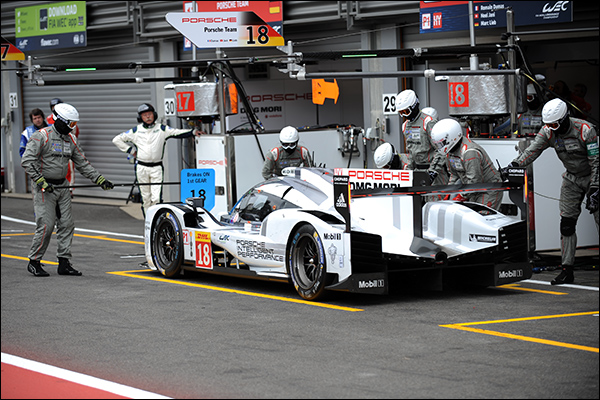 The leading #18 Porsche of Dumas made its routine stop shortly afterwards – as did the third-place #8 Audi with Jarvis on board – in this case changing driver to Lucas Di Grassi. The stops saw Lotterer gain around five seconds on Dumas, but there remained little to separate the first and second-place men’s times. 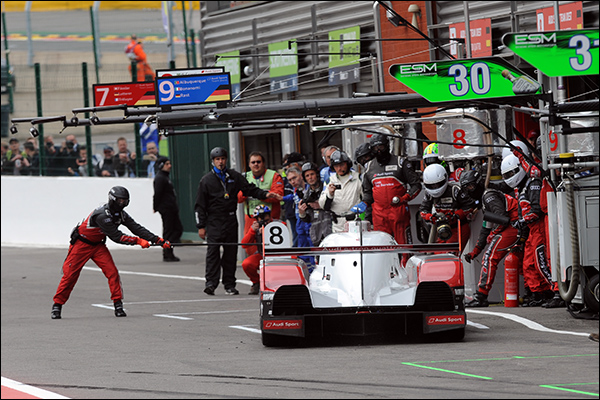 In GTE Am, the lead continued to be contested between the #50 Larbre Corvette of Kristian Poulsen and the #98 Aston Martin, now with Mathias Lauda at the wheel – but Poulsen came to grief while being lapped by one of the G-Drive P2s on the approach to Blanchimont and ended up backwards in the barrier. This allowed Basov (SMP Ferrari) and Al-Qubaisi (Proton Porsche) into second and third in class respectively.

The two Toyotas were having an intra-team battle in fourth and fifth – but had been well off the pace of both Audi and Porsche all weekend, which doesn’t bode well for the Japanese squad’s Le Mans hopes. Elsewhere, Webber was putting on a recovery drive in the #17 Porsche, taking sixth from Rast, while Poulsen’s attempt to return to the pits in the Corvette proved fruitless as the car was too badly damaged.

Approaching half-distance, Dumas had the gap to Lotterer at 24 seconds, with Di Grassi in third in the #8 Audi. Evans continued to lead P2 for Jota ahead of Canal and Yacoman in the two G-Drives. GTE Pro was headed up by Stanaway in the #99 Aston ahead of Bruni in the #51 Ferrari and Makowieci in the #92 Porsche, while Aston also controlled GTE Am courtesy of Lauda in the #98.