Round 2 of Super GT came from picturesque Fuji. Another bumper grid of 44 cars descended on the legendary circuit for a longer than usual 500 KM race. GT500 sporting the usual array of well turned out machinery from the Japanese powerhouses of Nissan, Lexus and Honda. GT300 saw a huge grid of 29 cars made up of 14 different models.

After an awful first round at Okayama there were smiles back on faces in the Nissan camp with a front row lock out. Pole went to the #1 Nissan of Matsuda and Quintarelli closely followed by the #12 car of Yasuda and De Oliveira. Round 1 winners Caldarelli and Hirasawa could only manage 14th in the #37 Lexus which suggested another tight race ahead.

Come race day and unusually in recent times the track was warm and dry. From the get go the Nissans from the front row headed off into the distance leaving the assembled chasing pack to squabble amongst themselves. The #100 NSX and the #46 Nissan collided sending the Honda to the back of the pack and the Nissan soon joined him after receiving a penalty for causing the incident.

The #36 and #38 Lexus were battling away back in 3rd and 4th. Rossiter in the #36 Patronas car just had too much pace for Tachikawa in the #38 car and eventually got by and began to fly through the traffic. In trying to Keep with Rossiter through the traffic Tachikawa collected a GT300 car and needed to pit for substantial repairs. The team attempted to get the car back out to collect points but it joined the fray just too late to collect enough points to be classified.

A fire breaking out on one of the GT300 machines brought out the safety car for a few laps while the fire was extinguished and removed. The field bunched back up but when they were released by the safety car it was a familiar story with the two Nissans disappearing off into the distance, Quintarelli keeping De Oliveira at bay consistently around 5 seconds back. 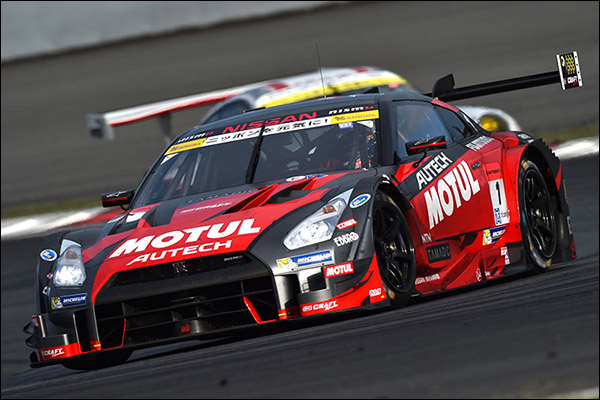 The leader pitted a lap earlier and the extra lap in the hands of De Oliveira and some swift pit work by the TEAM IMPUL pit crew made the difference with the #12 car emerging in the lead. But just as it looked as though the plan had worked perfectly the #1 car, now in the hands of Matsuda, retook the lead. A combination of a hard charging Matsuda and Yasuda having to tiptoe round turn one on cold tyres meant the lead was taken away just as soon as they had gained it. Matsuda built a solid lead and when he handed back to Quintarelli for the final stint he just had to bring the car home. Quintarelli did more than that though and extended the gap throughout his stint. When he finally crossed the line to take the win he had a 12 second lead over De Oliveira and around 50 seconds back was Rossiter in the #36 Lexus. The only other car that finished on the lead lap was the #17 Honda of Tsukakoshi and Mutoh.

The pole sitting #31 Prius lead from the start with the #3 and #10 Nissan GT-R chasing close behind split by the #11 Mercedes SLS in the capable hands of Bjorn Wirdheim. Just as the top 4 began to pull away the safety car came out as one of the GT300 Lambos caught fire after a spin.

With the field bunched back up it was the #3 Nissan that got the run at the restart and managed to snatch the lead from the Prius which did not seem to be able to make it’s tires last through it’s stints. The other front running Nissan pitted early to switch to an alternative strategy and in the hands of Katsumasa Chiyo the #10 car’s pace was electric. His pace was so good in fact that when the rest of the GT300 cars pitted he grabbed the lead. 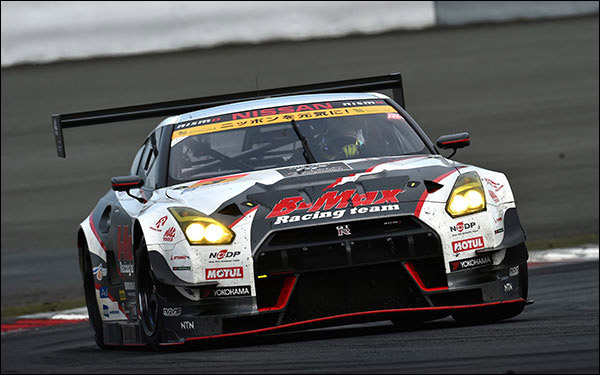 The Nissans, as with their GT500 big brothers, seemed to have the pace of the field. Chiyo pulled away at the front but the #3 car was also pulling away from the #11 SLS now in 3rd.

With the #10 car on an alternative strategy the #3 was pushing hard to try and get back ahead at the end. The #3 car was making up the difference but just when it looked like it was going to be very close for the win the #3 car suffered a puncture very early in the lap. The slow lap round to the pits took the #3 car out of contention for the win. 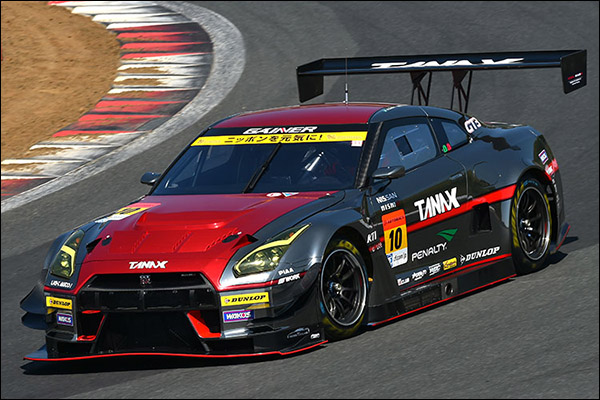 The win then went to the #10 Nissan GT-R after a blisteringly fast race pace had blown the completion away. With the win having looked in the bag for some time though the race for the podium was what kept everyone entertained in the last 30 minutes. The pole sitting Prius and #11 SLS had been battling all race and were being caught rapidly by the recovering #3 Nissan. The final 5 laps saw all three run nose to tail and With just two laps to go the Nissan led the train. The deciding factor was to be a spin for the #31 Prius at the first corner of the last lap. So the #3 Nissan came in 2nd and the SLS crossed the line in 3rd. The #31 Prius recovered from the spin quickly to get over the line in 4th.

So round 2 really turned the table for Nissan. No cars on either podium in Okayama but one-two in both classes at Fuji. The next round Sees the championship make it’s single trip out of Japan this year as the teams head to Thailand. In Thailand last year Lexus took the win. Ominously in GT300 the Nissan GT-R took it’s only win last year in Thailand. That coupled with the pace shown in Fuji has to make one of the GT-Rs favourite.